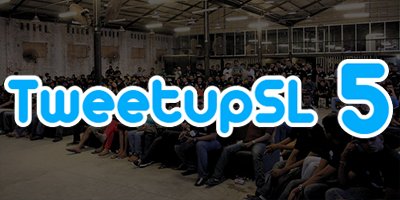 If you’re a Sri Lankan active on Twitter, chances are you’ve heard of #TweetupSL at least once in the past five years. It’s become so ubiquitous in the SL Twittersphere (yes, that’s a thing) that you can barely go a month without someone bringing it up. Such is the popularity of this once-niche event, that people – and businesses – are creating Twitter accounts as we speak, just so they can get a piece of the action. With this year’s event just a few days away, the conversation has now, needless to say, hit critical mass.

What is it #TweetupSL? And why is it a hashtag?

#TweetupSL is an annual gathering of Sri Lankan Twitter users in a carnival-like atmosphere where they mingle and interact with each other plus take part in various fun-filled activities and competitions during the course of several hours.

It’s basically Twitter IRL (in real life) minus the 140 character limit. Many users, or ‘tweeps’ as they’re often called, meet their followers and followees for the first time at this event (it’s not a cult, honest) and – if they’re anything like yours truly – bond over internet memes and tedious inside jokes while attempting to get past their crushing social awkwardness. Just kidding; it’s actually a lot of fun and is a great way to merge your online and offline lives. Really.

Oh, and it’s a hashtag because, honestly, what isn’t these days?

Long story short, one August evening in 2010, Twitter user @moshanthi wanted to meet up with a couple of other tweeps (namely @udaraumd and @rebelinpurple) for coffee. One thing led to another, and this happened:

Oh jeez .. Just a casual meeting planned with @udaraumd had grown into a big 'Tweet Event' taking place for the 1st time? ..

@cocoveranda, headed by the late, great Sarath Sathiamoorthi (@sarathsc), graciously offered to be the venue partner for the first ever #TweetupSL, and Dialog Axiata (@dialoglk), through its own fledgling social media team, came in as official sponsor. Not bad for a first-time event that literally nobody had even heard of just a week prior.

By the time #TweetupSL 2 rolled around, what began as a small gathering of mostly tech-savvy youths numbering less than 100 had evolved into a major event in the country’s social media calendar. Over the years that followed, the event, along with the Sri Lankan Twitter community, saw unprecedented growth. Last year’s Tweetup saw the participation of over 450 tweeps; and this year, the number is expected to go up to 1000.

Who is behind it?

#TweetupSL is largely a community event organised by a team of tweeps who have, entirely voluntarily, dedicated their time and effort to bring it to where it is today. The event is funded through sponsorship; and brands, especially those that have yet to establish a real presence on Twitter, are more than eager to cash in on its ever increasing popularity. (Social media marketing is big business these days and everybody wants a piece of the pie). Some of these funds are set aside for social good causes. At #TweetupSL 4, the organisers managed to raise Rs. 50,000 and, combined with sponsor money, a total of Rs. 100,000 was donated to the Water With a Difference charity.

Hype is at an all-time high, and the organisers have taken it upon themselves to meet the expectations of old and new tweeps alike, and make this year’s event bigger and better than ever before. The number of games and activities has gone through the roof, and there is even talk of a massive bouncy castle for the young at heart and a rodeo ride for the more adventurous.

Unlike in the previous installments, there will be no huge registration restrictions for new tweeps at #TweetupSL 5 (provided your Twitter account is at least a month old at the time of registration), and all proceeds from ticket sales will go to any social good cause chosen by the community. There will be the usual Mr. Tweep, Ms. Tweep, Funniest Tweep, etc. awards ceremony at the conclusion of the show, the most eagerly anticipated segment of the entire event; and we are reliably informed that campaigns are already under way to clinch these coveted titles (bribes are not discouraged). Food stalls and other attractions will also be plentiful at this year’s event and, of course, DJ music for those looking to shake a leg.

It’s set to be a truly memorable Tweetup, come December 20. Register now, and if you’re lucky enough to be selected, head over to the Orion City parking lot and get a sense of just how much fun it is to be a Twitterholic in Sri Lanka.