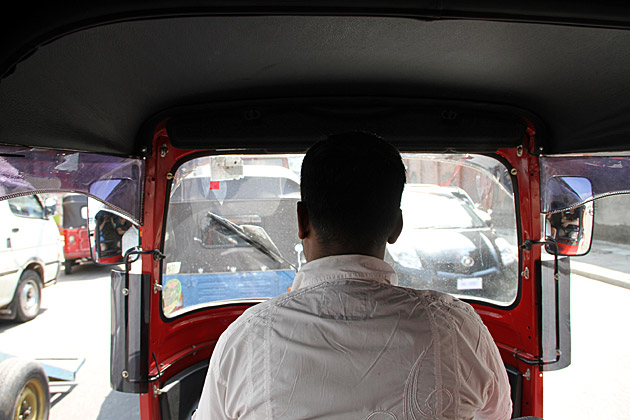 If you’re Sri Lankan or have otherwise walked the streets of Colombo, then you’re all too familiar with our resident knights of dirt and tarmac, our shining road warriors: red of tooth, harsh of cuss and loud of tune.

He’s the one you call if you’re out of cigarettes at 2 in the afternoon and it’s far too hot in the day for this “physical activity” stuff everyone’s always on about. He’ll be there in a flash, get you where you need to go – and will always turn the metre off if you’re taking too long at a stop.

You’ll never get used to calling him “Aiya,” as the polite terms go. You’ll find yourselves on a first name or ‘Machang’ basis. You’ll find you have a sort of Tuk-Tuk-Tab (patent pending) going on with him. Maybe you didn’t have change, maybe you had fifty rupees less than you thought you did: whatever the case, he’s cool with it. “Don’t worry,” he’ll say, “pay me when you can.”

As years go by, The Bro becomes The Uncle, but he’s for another day.

Still on the same friendly vein as The Bro, the Newscaster might be a bit too friendly. Oh, no, not creepy. Just … talkative.

When it comes down to it, there’s a part of you that feels like this one might have been, in some former life, a reporter or a news anchor. Maybe it was SLBC – that just feels right. If the roads are too wide, too low, too high or too narrow, he knows and wants nothing more than to tell you about it. The Newscaster gets points for ambition and determination. He will not be deterred by vaguely attentive grunts, the casual slipping-in of your headphones or the ear-numbing wind velocity of Marine Drive. Like the uncle, the newscaster is often a font of wisdom, dispensed at the end of a report like a Saturday morning PSA.

The price of cigarettes is up by 5 Rupees? “But I don’t smoke!” you think to yourself. Doesn’t matter, now you know. This just in! Science has found that dogs can look up. “Oh,” you say, “I’m more of a cat person.” Too late. You know all about dogs now. Oh, also dog breeds, dog owners, who owns what dog, his dog and their ticks. True story.

Usually, it’s nothing so ridiculous (we just like to exaggerate), but if you’re like us and tend not to pay too much attention to the daily news flash until it’s up in your face, a three-wheel ride with the newscaster is an educational experience. He is the news source Colombo deserves.

Except for Roar.lk – you heard it here first.

They say nothing can generate more faith per capita in any one-belief system faster than a dangerous taxi driver. In our case, this holds true for tuk-tuks. The trailblazer is among the elite of his ilk.

When he steps out for his tea, lunch or the occasional chat, he is Siripala, or Lal, or Saman. However, behind the handlebar steering he’s a brown Jason Statham, Vin Diesel with a pornstache, Michael Knight with K.I.T.T. played by the voice in his head. He doesn’t have the time to worry about this “life” and “breathing” stuff you’re crying about in the back seat. All that matters is the speed, baby!

“You’re in a hurry? A business meeting? I’ll get you there, ten minutes tops.” Safely? What’s that?

On that note, these trips can sometimes be fun and really do save you time on what would normally be a much longer ride. We’ve often found that most trailblazers are also competent drivers. Since we already paid him to take us from point A to B, we figure we might as well trust him to take us there safely. We’re going to assume that’s part of the unspoken contract. By the time we learn that he’s a trailblazer, we’re well on the way to hell with him anyway, so, in for a penny – in for a pound.

If he starts trying to pull drifts though, that’s probably a cue to get out and hop another tuk.

Before we start on this one, we’d like anyone reading at home, and especially anyone reading this in the back of a suspiciously quiet tuk, to not freak out. If your three-wheel driver is an ASK it doesn’t mean that he IS a serial killer. Just seems scary enough to be one is all. Statistically, he probably isn’t.

…nine times out of ten.

The ASK is as quiet as they come. He doesn’t say a word unless he absolutely needs to and barring that, he’ll respond with nods and grunts. He’s probably just the strong silent type left over from the Greatest Generation, but translate that into a night-time scenario, add one dead phone and friends too far away to be of any help and you’ve got a recipe for a freakout fiesta. Think Ron Swanson but scarier.

All this in general isn’t even remotely worrysome and, is honestly, in no way the ASK’s fault. He’s just a quiet guy in a three-wheeler, plying his skill and making his way in the world.

One turn down a shortcut or a connecting lane and the violin screech from Psycho plays goes off in your head like a symphony orchestra featuring toddlers. Before the trip is over you find yourself thinking, “Is this how stupid Sri Lankans die?”

“Is there a machete under the seat?” you wonder. “Is that the rag he soaks with ether? Oh, deity!” you cry in your head.

Then the trip ends. You say thank you, you pay him, and he leaves. You wonder what you were so worried about in the first place.

You may have noticed that the list above is an order from friendliest to potentially scariest. Why, then, you might ask, is this comparatively harmless herald of capitalism number five on the list? Because he is by far the most nefarious.

Now, for us who’ve lived here all our lives this is a non-existent problem. Yes, there’ll be the occasional exuberant up-quoter, but he’s either not too convinced of his sale and easily called out, or it’s not a price too high and easily paid. That’s not the tourist trap’s game, he wouldn’t dare. We’re not tourists. There’s a reason he’s called the Tourist Trap.

Some of you are tourists. It’s not your fault, we understand. Tourists are the tourist trap’s treasure trove (hooray for alliteration). The fact is, if you don’t speak the lingo and learn how to talk the man down and call him out, trouble comes a-sniffin’.

There’s less to worry about these days, with metre tuks all around the city; but every now and again there’s the one who isn’t yet up to date or has that “broken metre”. Make sure you set a price on the onset, haggling and all, and make sure he sticks to it.

Remember, eye contact is very important. That’s how you spot the dollar-signs.

So remember, kids. The tuk-tuks of Colombo come from all places and in all kinds. That’s why we love them. They may drive a little fast and seem a little scary, but they’re always there when we need them, and they’ll always take us where we need to go. Besides, who can we pin the blame on when we are late for a meeting or who would save us in a moment of blind panic when we realise we should have been somewhere else half an hour ago?