Initiated by the British in 1894, the St. John’s Fishmarket in Pettah was the primary hub for fresh seafood. Set smack dab in one of the busiest areas in the city, the market was incredibly popular, with trucks full of fresh fish rolling in as early as 2 am. Needless to say, this created a lot of traffic in an already congested Colombo. Coming under the purview of the Urban Development Authority, plans were made to relocate the market to Peliyagoda, just at the turn-off at the Colombo-Katunayake Expressway. The move was opposed by fishmongers who claimed that this would decrease business as customers would not commute all the way out of Colombo to make their purchases. However, the newer market (rechristened as the Peliyagoda Fish Market), continues to be as busy as ever. It’s also a lot cleaner and better organised than its predecessor. Our photographer Thiva Arunagirinathan dropped in early on a Saturday morning to see what business there was like. It is 4:30 am on a Saturday morning. Fishermen are already laying out their catches, and the fish market is getting ready for business as usual despite the early hour. This little tea-shop just outside the main entrance of the market is where fishmongers and early customers stop by for a cup of tea and short-eats. 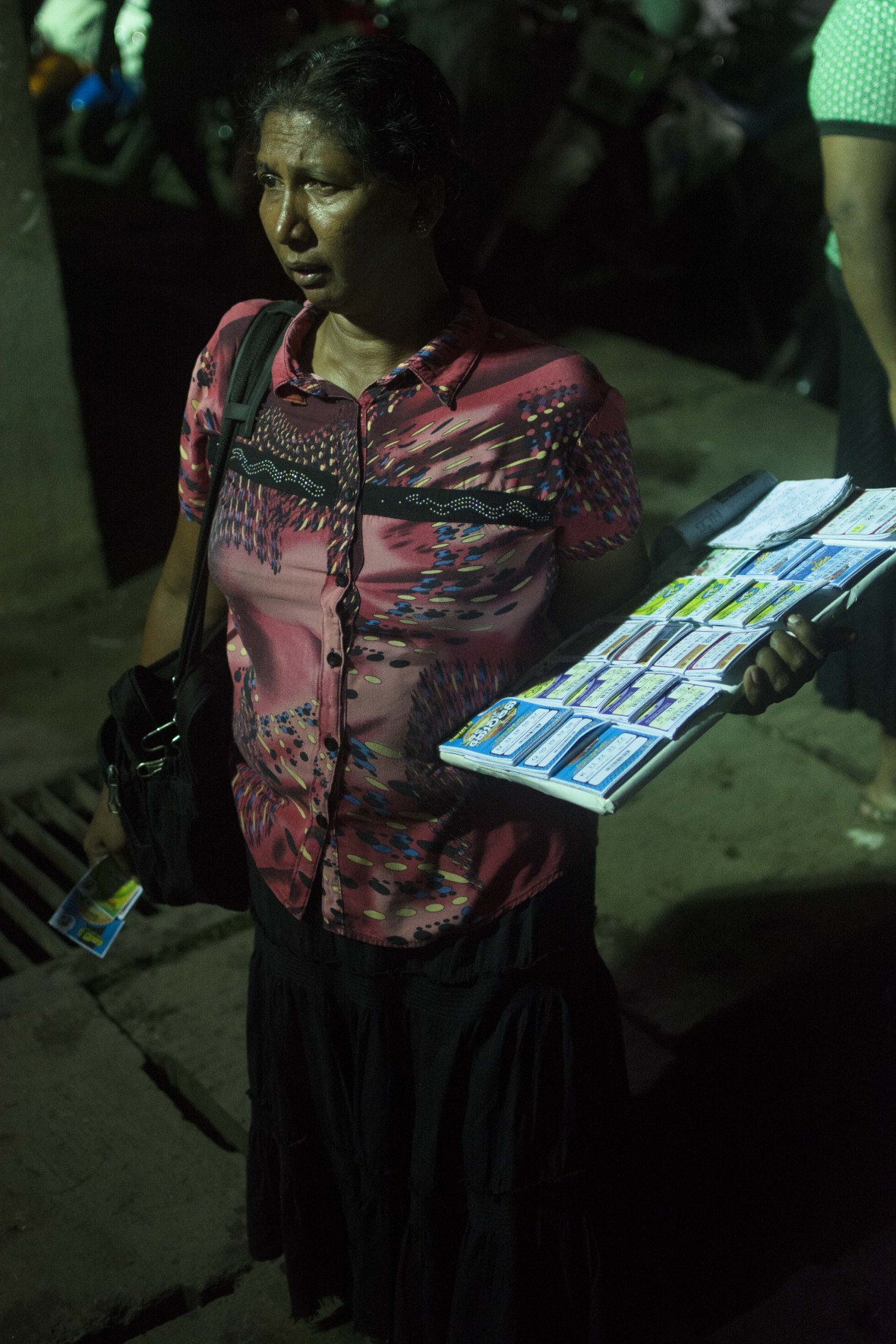 You won’t just find fish and fishmongers here. The market has created space for a host of smaller vendors and businesses in the area. Here, a lottery ticket seller stands at the entrance hoping to make a few early sales. Lorries packed with blood-tinged ice and fish arrive from all ends of the country. Fish from Trincomalee? You get it here. Along with catch from Batticaloa, Kalutara, Jaffna, Matara, Mannar, Galle, and Puttalam. Here, a man carries a carton of dry ice to be distributed to the stalls and keep fish fresh. 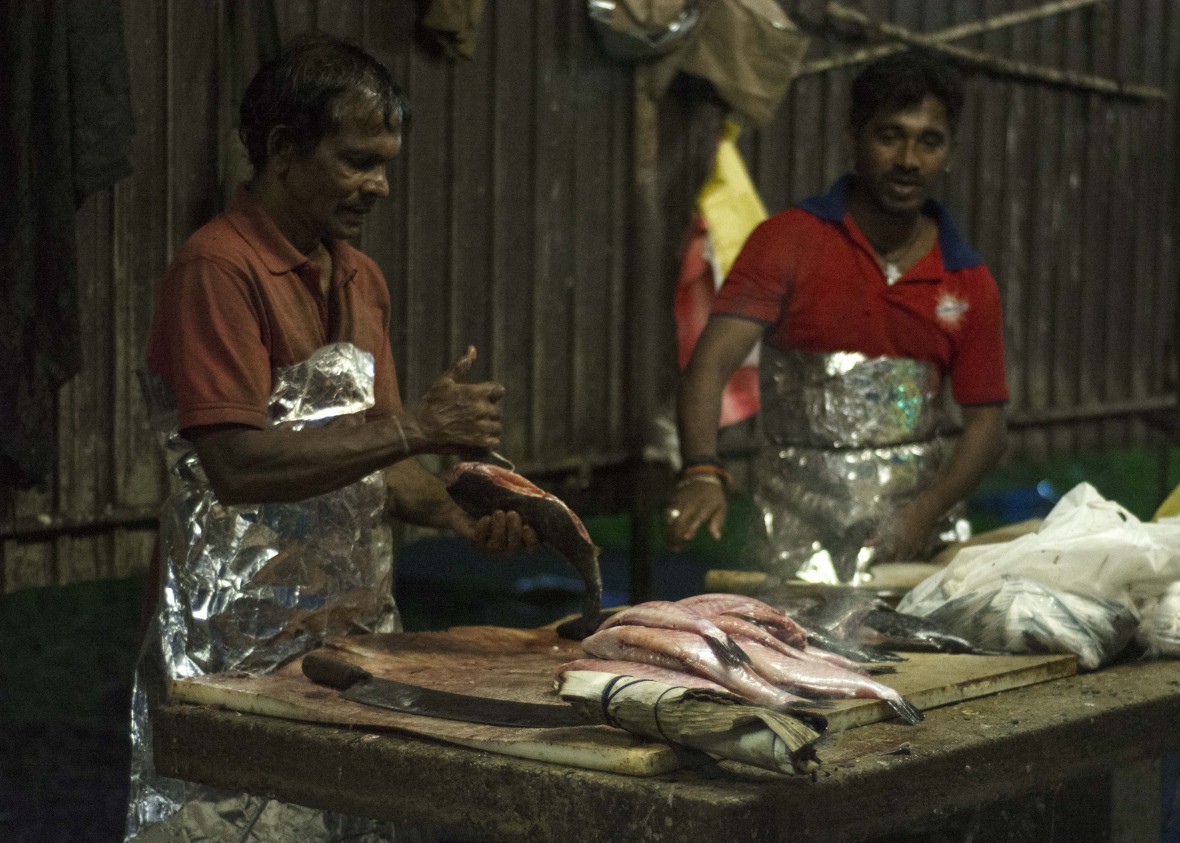 These smaller stalls alongside the carpark cater to people who want their fish gutted, cleaned, and cut. Buckets of water are poured over massive chunks of deep-frozen fish to defrost them. 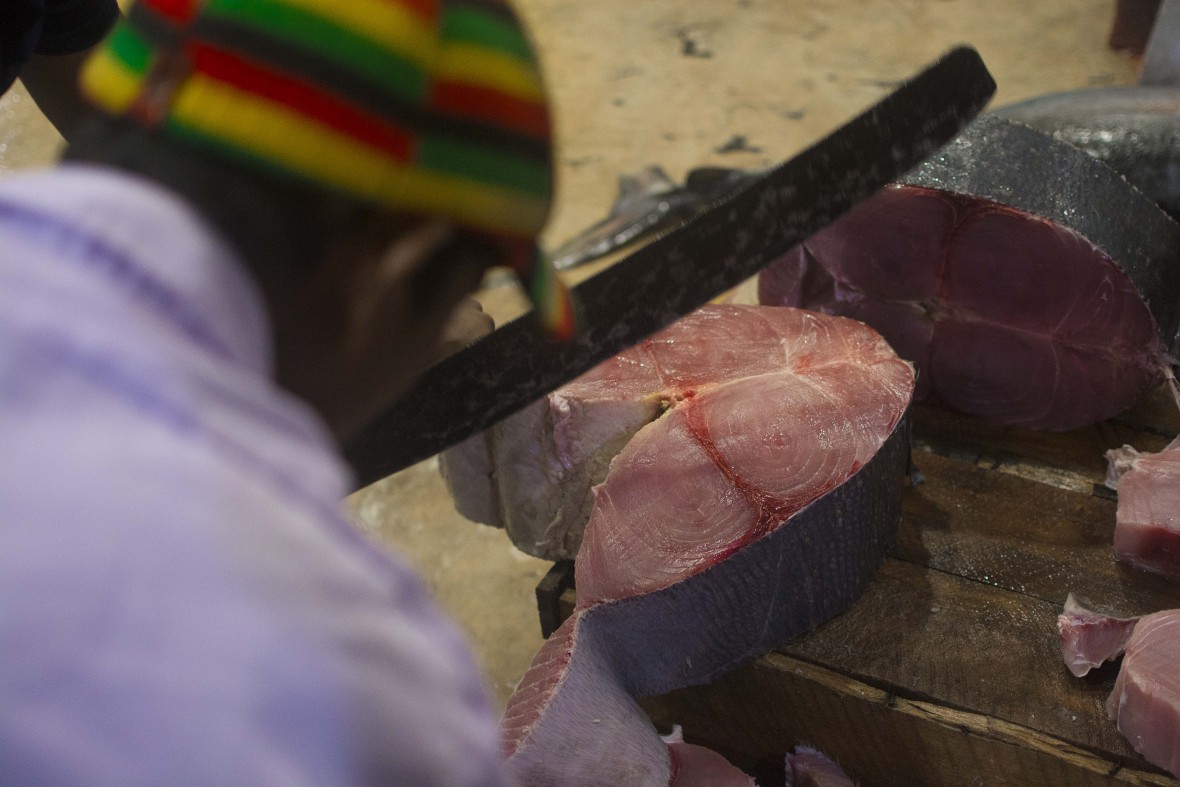 The larger fish are chopped into smaller pieces and are often sold in kilos. Of course, it’s not just fish that’s sold here. You get a lot of variety, including local favourites like crab. Rubber bands are wrapped around crabs for safe handling—those pincers deliver a nasty nip. In the midst of tuna, saalayo, and crabs, you can also find swordfish (pictured on the right), eels, and many more. If you’re adventurous in the kitchen and love seafood, head over to the Peliyagoda Fish Market for species of fish you won’t find in your regular supermarket. You might want to take a bucket or tub along with you as well.