Within the city of Colombo, surrounded by the daily hustle and bustle on the streets, stands the Town Hall, the headquarters of the Colombo Municipal Council and the office of the Mayor of Colombo. It is one of the few colonial buildings built during the British era that still functions in its original role. Facing the main entrance of the Viharamahadevi Park, this stately, whitewashed building with its structured porch, tall elegant columns and imposing central dome is hard to miss. It is also one of the most important administrative offices of the city, for it is in here that Colombo’s elected municipal council meets to discuss administrative matters related to the functioning of the city.

How The Present Town Hall Came To Be The original design and plan for the building was drawn up by architect S. J. Edwards. Image courtesy famouswonders.com

Following the adoption of the Municipalities Ordinance by the Legislative Council of British Ceylon in 1865, it was decided that Colombo city needed its own Municipal Council. In 1873, the city was given its own Municipal Council building in Pettah. It was built by the British architect J. G. Smither and was opened by the then Governor of the country, Sir William Gregory.

This building was a neo-gothic style structure located at the intersection of Main Street and Fifth Cross Street in Pettah, and featured minarets, arches, iron cast columns and wooden staircases as a part of its architecture. Even today, curious visitors can pay a visit to the old Town Hall, which is a historical landmark of the city and functions as a museum.

Towards the beginning of the 20th century, because of a lack of space inside the Municipal Council headquarters, it was decided by the council that a new building in a new location was needed. Yet, due to the preparations for the First World War, the plans for the new Town Hall could not be discussed further.

It was only on the 24th May, 1924, that the foundation stone for the new Town Hall was laid by Thomas Reid, the Mayor of Colombo at that time.

The architectural design and structure of Colombo’s new Town Hall was decided through an international architectural design competition held by the Colombo Municipal Council, two years prior to the laying of the foundation stone. The winner of this competition was the British architect S. J. Edwards. His design for the building was influenced by 18th century French-American engineer Pierre L’Enfant’s neoclassical Capitol Building in Washington D.C., USA.

It was the renowned British town-planner of that time, Professor Patrick Geddes, who suggested the site where the new Town Hall was to be built. Thus the land overlooking the Viharamahadevi Park, then known as Victoria Park, within the Cinnamon Gardens residential area was selected. The construction of the building took four years to complete, and was declared opened on the 2nd May, 1928, by British Governor Sir Herbert Stanley. At the time, it was regarded the best Municipal Council building in the Eastern Hemisphere. 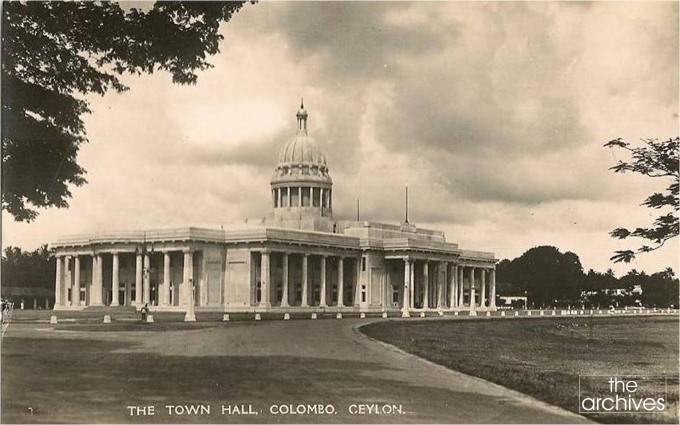 Art historian Ganga Rajini Dissanayake told Roar Media that even though the Town Hall building had been renovated several times over the course of nearly a century, its exterior architectural design has not been altered.

Dissanayake said that the Corinthian style of architecture is featured in the dome at the centre of the building and the columns of its front porch.

Six Corinthian style columns flank either side of the front porch, and each column stands at a height of 38 feet. The rest of the building also features columns of two different architectural styles: Tuscan style of Renaissance Italy and the more modern composite style. The entire building is 108 meters (354 feet) in length and 51.3 meters (168 feet) in both width and height. Elevators and mezzanine floors were later additions to the interior of the building.

Currently the building—which is only a decade short of a century—is undergoing restoration work under the guidance of architect S. U. B. Dolapihilla. He hopes to make changes to the interior of Town Hall and restore it to its original plan and design.