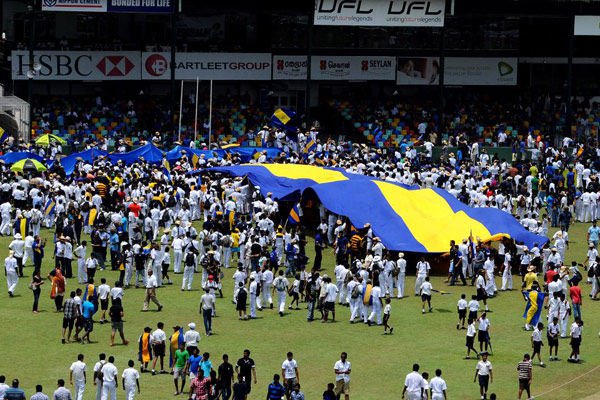 For many schoolchildren in Sri Lanka, the months of February and March are ushered in with much fanfare, excitement at school, and the growing anticipation of the ‘Big Match’. For those of you unfamiliar with this term, the ‘Big Match’ refers to an annual cricket encounter between rival schools at the end of the 1st XI cricket season.

So, how do you know that it’s “that time of the year”? Here’s a list of tell-tale signs:

One of the first signs that the “Big Match” season is around the corner, this practice has been prevalent for decades! Flags bearing the respective school colours can be seen fluttering in the wind, out of cars, school vans and buses, as kids showcase their school pride.

A practice in the past, that we are sure still holds true to this day, is ‘flag flicking’. Rival school vans and buses grab flags as they pass by, almost always unknowingly grabbing a flag from a younger schoolchild.

Forget moving about during the somewhat peaceful hours of traffic-less Colombo after the office rush and prior to the school rush. Official cycle parades can take up a couple of KMs of road, any time of the day, as trucks, cars, and bicycles bearing schoolboys bring the traffic to a stalemate, as they bellow out their school name in unison at every junction and turn in the road.

The unofficial cycle parades that begin the week of the Big Match also involve hordes of boys clad in coloured clothes storming the leading girls’ schools, in a bid to have some innocent fun (or so they claim) that only seems to be tolerated by the girls’ school administrations during this time of the year.

3. Headbands, Armbands and Merchandise Outside Schools

It’s the only time of the year that a schoolchild could attend school with a number of school-coloured bracelets, headbands, or armbands on their body. In otherwise extremely regimented and well-disciplined schools, such practices would not be tolerated, but somehow when ‘Big Match’ season comes around, the rules get a bit relaxed.

School buildings are transformed from their mundane selves to a vibrant version, as they are dressed in massive flags that even cover the windows that provide crucial ventilation into the classrooms. Each year the flags seem to be growing bigger, and the buildings more smothered in school colours.

5. Riot Police Outside and Inside Cricket Stadiums

With the testosterone pumping and the drinks flowing there is always bound to be trouble inside and outside the major cricket stadiums (SSC, P.Sara, Galle, Asgiriya). The Police and independent security agencies keep a close eye on the spectators, as a friendly push can easily end up in a brawl.

Pictured here is one of the not uncommon (but also slightly unconventional) means of celebrating Big Match season. Image Credit: asianmirror.lk

6. The ‘Local’ School Lads At Your Workplace Are Getting Excited

Almost a bigger spectacle for the older generations, the Big Match proves to be one of the only times a year that many of the old boys get to meet their peers and fellow school boys. Needing no one to hold their hand, most of the old boys jump and revel in this opportunity, reliving the good old school days and behaving like they never left school.

You simply cannot escape this unique sound that goes hand in hand with Sri Lanka’s brand of cricket as radio commercials, TV ads, and even ringtones sound out with papare beats. This infectious melody truly is a hallmark of the Big Match spirit.

At this time of the year, people of all ages are caught up in the Big Match spirit, each cheering on their own school. Image Credit: lankauniversity-news.com

Having always possessed a very strong school cricket culture, many of the major schools in Colombo, Galle and Kandy have engaged in the practice of the Big Match for decades. In fact, the Royal-Thomian  is considered the second longest uninterrupted cricket game in the world, with a game being played each year, with this year’s being the 137th edition of the series, a truly remarkable feat for a schoolboy cricket game!

As the heat picks up around the city, so does the beating of the drums and the blowing of the papare band trumpets ‒ a constant reminder of the ‘Big Match’ culture that truly is unique to Sri Lanka.