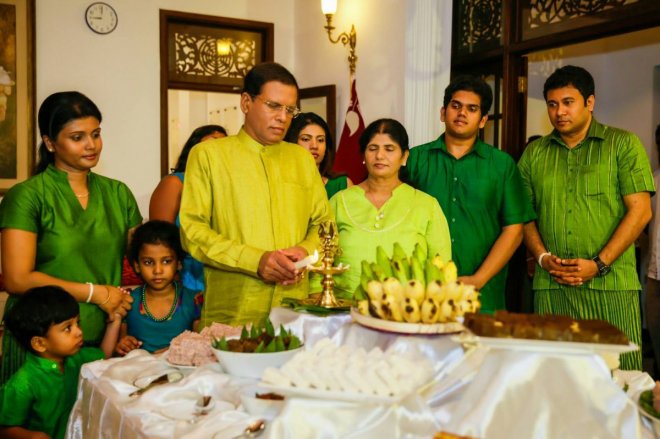 The Sri Lankan New Year (Avurudu to the Sinhalese, Puthu Varudam to the Tamils) is perhaps the country’s biggest cultural celebration: a coming together of two different races and religions; the Sinhalese Buddhists and the Tamil Hindus, as they observe the spiritual customs and traditions of this two-day festival. There are varying religious observances in both the Sinhalese and Buddhist cultures, that have been passed down for generations These rituals make up the most significant aspect of the celebrations (aside from the consumption of sweetmeats and the getting together of friends and family) and each year during the festival, they are respectfully observed according to the auspicious times decided upon by astrologers.

President Sirisena and his family observe avurudu rituals in April, 2016. All the rituals that take place for the New Year are conducted according to auspicious times. Image courtesy lankahotnews.net

However, the auspicious times ‒ or the nekath as they are referred to in Sinhalese ‒ were not introduced with the advent of Buddhism or even Hinduism; it was, in fact, an aspect of a much older culture, the Naga tribe of ancient Sri Lanka. The word nekath itself is a word that can be traced back to the Naga people. As our history textbooks have taught us, the Nagas (also known as the Cheras) were one of the ancient tribes who inhabited Sri Lanka, along with the Yaksha and Raaksha tribes, when Prince Vijaya arrived at what he called Thambapanni in the 5th century B.C.

Until the 3rd century B.C. the Naga tribe appears as a distinct group in the Mahavamsa and other early Sinhalese chronicles, as well as early Tamil literary works. As mentioned in these chronicles of old, they lived in the Kelaniya area and the Northern peninsula. The island of Nagadeepa or Nainativu just off the coast of Jaffna was, in fact, the setting of many legends and Jataka Katha, including that of the warring Naga chieftains Chulodara and Mahodara, and of Maha Ahikka (the uncle of these two chieftains) meeting with the Lord Buddha.

The entrance to the island of Nagadeepa. Image credit: panoramio.com/Walpolage Premalal Walpola

By the 9th century A.D. the Naga people had integrated with the Sinhalese and Tamil culture. The word Naga literally means ‘snake’ or ‘serpent’ in Sanskrit, and the Naga tribe was a totemic tribe of serpent worshippers who considered the serpent as a creature of great power. Since ancient times, the Hindus, too, have regarded the cobra as a divine being; a cobra can be found entwined around the neck of the Hindu god Shiva, and has also been associated with the god Vishnu. Even in Buddhism, symbolism of the cobra is ubiquitous. According to Buddhist scriptures, the serpent-king Muchalinda shielded Lord Buddha from the rain by coiling around him and holding his large hood above the Buddha’s head. These connotations may have been influenced by the culture of the Nagas, whose roots can be traced back to India as well.

According to Buddhist scriptures, the serpent-king Muchalinda used his large hood to shield Lord Buddha from the rain. Image credit: panoramio.com/Ravindra Weragoda

The Naga people were said to be navigators, who made the most of the positions and motions of the stars and planets to travel through their land, and they divided the sky into 27 nekath to do so. Even the celebration of festivals, or special days of good fortune which are based on auspicious times, has taken place since ancient times, before the advent of Buddhism. King Devanampiyatissa’s hunting expedition, during which he encountered Mahinda Thero and accepted Buddhism, is said to have taken place on a day of nekath.

Modern day astrologers make use of the motion of the sun through these nekath to pinpoint the exact time of the dawning of the avurudu. Every year, the sun moves through the circuit of 12 constellations, and, according to the principle of astrology, it is the sun’s entrance to the first base of Aries (which is known as the Asvida Neketha) after its exit from the Revanthi Neketha, (the last base of the constellation of Pisces) that symbolises the dawn of the Sinhala and Tamil New Year. According to a mathematical calculation of planetary motion linked with the Sinhala and Tamil New Year, the Sankranthi or the Nonagathaya (which is the transitional period of the sun’s movement from Pisces to Aries) is 12 hours and 48 minutes. It is at the end of this time period that the avurudu celebrations begin.

The Nonagathaya, which falls either on April 13 or 14, is considered an inauspicious period of time and, aside from religious activities such as visits to temples, all other activities such as cooking and cleaning of houses are discouraged. The dawning of the New Year is signified with the lighting of the oil lamp and crackers and the cleaning of houses. All other rituals take place afterwards, according to the definite auspicious times which are indicated by the litha.

The litha is a schedule of sorts that displays ceremonial rituals along with the auspicious times they need to take place. Image courtesy jyotisha.00it.com

According to historical sources, the Sinhala and Tamil New Year was originally celebrated as a harvest festival and a festival of the sun, because agriculture was the primary source of livelihood among the Lankans of the olden days, and nature, the elements, and the astrological bodies were much revered in our ancient culture. Over the centuries, however, Buddhist and Hindu customs and rituals have become assimilated to it, as the two religions became major influences on our culture and evolved into distinct communities of their own.

Today, it is a national festival, and can be said to symbolise the unity of two separate cultures and religions. In spite of the current temperamental weather that yields hot, humid mornings and (if we’re lucky) rainy evenings, the prospect of enjoying sweetmeats lovingly shared among family, friends, and neighbours is something which we Lankans can all look forward to.

Roar wishes its readers a happy and prosperous new year.