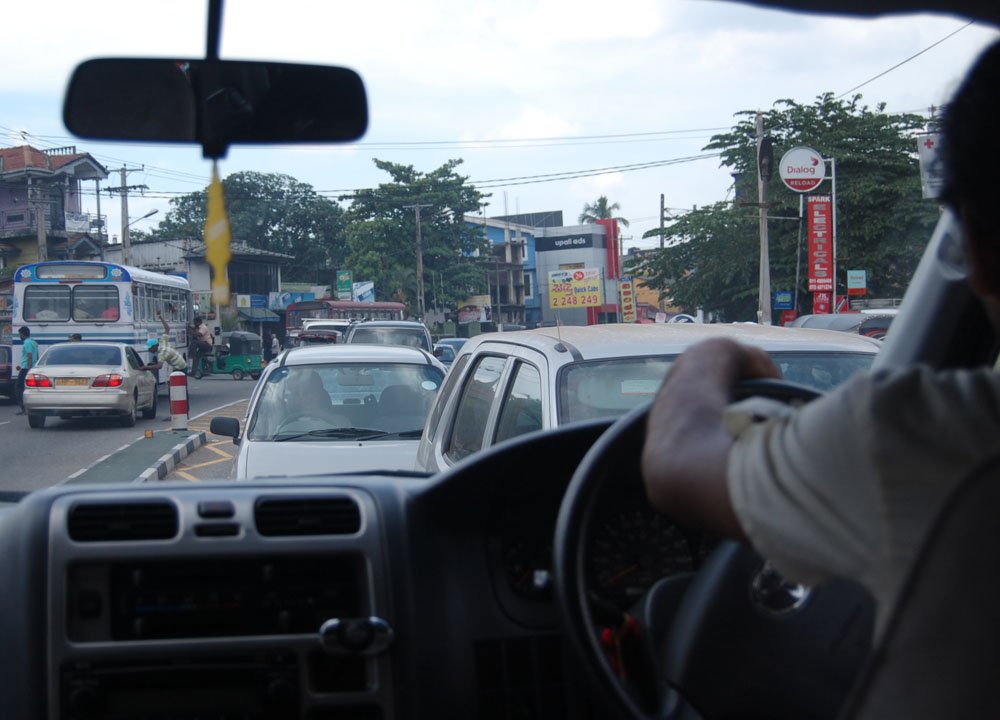 Driving in Sri Lanka is quite a hackneyed topic. Hackneyed because the subject isn’t as mundane as it is in most other countries, and why it is less mundane is apparent to everyone who has braved the immensely overcrowded roads of Sri Lanka (particularly Colombo).

Though hackneyed, it never loses its novelty, chiefly because almost every ‘licenced’ driver has obtained their so called licence through the distasteful process of ‘incentivisation’ (because ‘bribe’ is an ugly word). This makes room for many potential disasters as well as a few extraordinary situations as well; couple this with our inherent impatience and bad tempers and we have the recipe for a hilarious concoction.

The usual areas of discussion are about how only some may have heard of the myth of road rules or referred the vastly educational little booklet which allows one to pass their driving test (it has helpful tips like what you can and cannot do on the road) a piece of education almost every motorist in this country could dearly use.

It has been often said that if you can drive here you can drive anywhere else in the world, so in the following ramble (again because ‘rant’ sounds ugly) you’ll see some things that you are almost certain to identify with, and make you say “only in Sri Lanka.”

People have road rage all over the world. But just like any other country, Sri Lankans have developed their own vocabulary and clichés when berating errant road users or just when blowing off some steam when wedged in traffic after a stressful day. So if you find yourself angry and at a loss for words, you might want to try out some of these classics:

“ Adoh bappada licen(ce) dunne?” [Did your uncle give you your licence? – (the effect is better felt in Sinhalese)]

This is perhaps the most commonly used hack and spans to even those who do not have the greatest command of our mother tongue, purely because of its overuse. Let’s not forget the Lankan love for mixing a little bit of nepotism with everything.

2. To drivers who venture a little too close to their irate neighbours –

“Kannadi deka karang dennada?” (Shall I buy you some spectacles?)

This may warrant some clever comebacks of their own, so use it with caution and only if you are confident of holding your own.

“Inna barinang udingyanna” (if you can’t wait, then go over me)

The latter can be signified with a hand gesture which says ‘fly over me’. Feel free to be creative when imagining the hand gesture.

Again, this must now be used with caution as it may warrant a “I am not your nangi #streetharrasmenthurts board.” Ladies, there’s a host of responses to such flippant sayings which leave your verbal assailant at a complete loss for words.

Most road users like to mete out all kinds of verbal lashings on those who happen to get in the cross hairs or step on toes, but what we fail to realize is that we react to things which we often end up doing ourselves. It’s just not okay when someone else does it.

let’s see if we can turn two lanes into three

People tend to be more mindful of pedestrians when driving, chiefly because there are higher penalties for those who knock them. So that being the case, they tend to really run motorists emotions high when they act recklessly.

Losing the green light – There are those pedestrians that love waiting on the sidelines while the traffic light glows red only to ready themselves at amber and make a senseless dash across the road the moment the light turns green, bringing the driver to an abrupt halt and swearing with every colourful word in his/her vocabulary.

Curse as we may at these busy bodied pedestrians, we grin from ear to ear when making the dash ourselves and perhaps chuckle at the driver now emitting smoke from his ears.

Elusive yellow crossings – Sometimes the purpose of the yellow crossing is lost altogether, partly because drivers feel that they can race by before the hapless road crosser makes it through, and sometimes because pedestrians forget that they are supposed to use it.

We have undoubtedly on many occasions had livid explosions when dealing with pedestrians who run amuck, but none perhaps make our blood boil more than when they decide to cross the road, with the yellow crossing a few feet away. It’s almost as if those last few feet to actually get to the crossing is just too perilous a journey.

And then we ourselves pull a ‘road runner’ move quickly across the road with crossing not far away.

No article about travelling in Sri Lanka would be complete without the mention of ‘tuk tuks’- very much an integral part of the Lankan road scene and catalyst of many a heated squabble on the roads. These are by and large the biggest contributors to street entertainment as some adventurous tuk tuk drivers who are too aware that they are the smallest vehicle on the road and are under the impression that they can squeeze in almost anywhere.

Here’s where the double standard is; we would not hold back in making our discontent and annoyance known when they do happen to cut across or hit an impossible gap, leading to things like “Koheda Manussayo yanne?” (Where are you going men?) or some other less polite sayings that many drivers use which goes by the acronym ‘A.H.K.V.P’ – I’ll leave it your common sense and knowledge of Sinhala swear words to figure out what it stands for. However, if we happen to be in this adventurous tuk we will eagerly egg the driver on, praise his driving skills and be awe inspired by how he managed to cut the other drivers off and get to your destination in half the time.

And the list goes on, from driving with their horns (an unheard of phenomena in most other countries) to just being downright abrasive. Everything discussed in the above is just a minor taste of what we’re capable of and what exactly we must gear ourselves to be ready for on a normal day on the road.