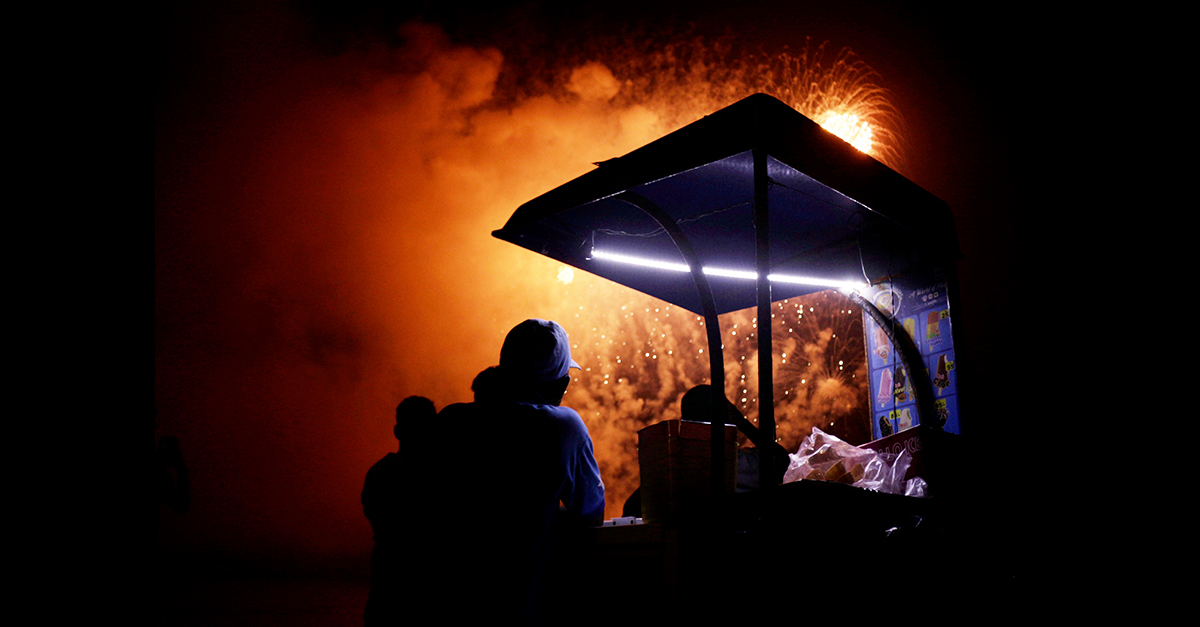 In December last year, we sent out a call for submissions.

We wanted photographers from all over the country—both amateur and professional—to participate in a specially curated online photography festival: we wanted you to share your vision, the vision that inspires, informs and awes you.

The challenge we placed before you, with Colours of Community, was to choose a colour that portrayed a particular individual, group or community, through which their stories can be told. The colours had to play a pivotal role in identifying the subject in the photograph.

The submissions for our online festival ended on 18 January, by which time we had received over 50 submissions and over 70 photographs to choose from.

A group of in-house creatives (photographers, writers and designers) came together to judge the submissions, from which we chose what we felt were the best.

And so, here are the top picks from the very first Roar Showtime. Translation: The silhouette of an ice cream vendor at the Galle Face Green, framed against the fireworks that were lit at the opening of the Colombo Port City.

Ekanayake’s image strikes a beautiful balance between light and darkness, the future and the past, security and insecurity— and encapsulates, in one image, much of Sri Lanka’s present status. The brilliance of the fireworks against the looming darkness, highlights the hopes and dreams of the Colombo Port City against the uncertainty of the ice cream vendor’s future in a rapidly developing world. Change is constant and the focus on oranges captures that suspended moment in time perfectly. Weerasekara’s image of a torchbearer is portrayed with the colour red, and described thus:

Translation: Red is bright and vibrantly cuts across  the dark background, conveying the destiny, conflict and survival of the torchbearer. Once a member of the middle caste in the Kandyan period, torchbearers served the King and venerated the Temple of Tooth. Their tradition and legacy with fire is also symbolised through the colour red. The burning showcases the struggle for survival  as a minority group in society . Praveen focuses on the colour orange, as seen at the annual Mandur Murugan Kovil Festival in the Eastern province. The festival celebrates one of the many Hindu deities, Murugan, who has a close relationship with the River Ganges in India, and the orange worn by the Hindu devotees contrasts beautifully with the teal sky. What we liked about Jayaweera’s photo was his ability to use muted brown and gold to represent the tranquility of the image. In his own words;

I’ve titled this photo ‘An Evening At The Teashop’, for it was taken at my favourite tea spot while sipping a delicious Nestomalt and munching on a crispy samosa. It is a boutique-styled place on the upper end of Bazaar Street, Kurunegala. I’ve always loved to have my evening tea around 4 PM, when the rays of the setting sun bounce off the giant canary yellow walls of the mosque in front, illuminating the entire tea shop with its other-wordly glow. Najeem’s image speaks for itself, representing through orange, an otherwise unseen and under-represented community in Sri Lanka—the street cleaners. Najeem details below his encounter with the subject.

Her name is Indika. She’s from Kataragama and she is 40 years old. She is the mother of an 18-year -old girl. She is struggling each and every day and yet, she smiles as she has everything in her life.

When she was 29, the gas cooker exploded due to a leak while she was cooking breakfast. The incident caused severe burns to her face and she was in treatment for over a year. During that time, her husband left her and their child on their own.

Although she may seem to be doing an ordinary job, she inspired me. She survives on her own and takes care of her child. Fishing nets of an azure blue so similar to the colours of deep ocean, is captured drying on the golden, heated sands by Pakkiayrajah. It is almost as though the fisherman in the foreground is walking on water.

Translation: The relationship between the fisherman, the sea and the colour blue is inseparable. It is a strong bond. It is only through their daily labour that we can taste the fish. Green dominates Yoganathan’s image of a farmer in the middle of a field of lush paddy. The field running into the horizon adds a beautiful depth to the photo. In Yoganathan’s words:

In lush, tropical Sri Lanka, paddy cultivation took deep root, transforming into the lifeblood of the islanders and setting the pace for a national culture embellished with elaborate rituals centred around the preparation of the fields and the harvesting of the grain. During the phase of this cultivation, lands will look like green carpets, further adding beauty to the Island. Rice is the staple food of the inhabitants of Sri Lanka, and paddy is cultivated as a wetland crop in all the districts. Bright yellow captures the gaiety of these children outside a kovil on the island of Nainativu, off the coast of the Jaffna peninsula—also referred to as Nagadeepa in Sinhala.

What name should we call this place? Nagadeepa or Nainativu? Regardless, it is a place where there is hope and happiness. Tennekoon captured this multicoloured images from inside a moving vehicle, late one evening in Nugegoda. Nooramith uses green to capture death and burial in the Muslim community.

It is just another Thursday night, considered a night of worship  in Islamic teachings. Inside the Dawatagaha Jumma Masjid, an old man sits in thoughtful prayer in front of a Ziyaram; the tomb of an Awliya (saint – friend of Allah).

Although the existence of a Ziyaram in the heart of cinnamon estate was first discovered in 1802, it is not certain when the saint actually arrived in Sri Lanka. Nonetheless, it is understood that he came to the island on the direction of Holy Prophet, sal Allahu alaihi wa sallam (peace be upon him).

A soft glow of light spills from inside the masjid, mixing with street lights and the neon pulse of the kottu shop next door. Conversation from beggars, vendors, devotees and passersby are carried lightly in the wind, in the shadow of the old mosque, plants and creepers climbing its faded exterior.

The moment you step into the Ziyaram, a calm washes over you, as if the air itself were different. The tomb is covered in a soft felt, shrouded in green fabric. The scent of attar, perfume, enters your nose as you press your face against it, kissing it, with your hand over your heart, greeting the saint within, As-salamu alaykum Ash Sheik Usman Volliyullah.

Despite destructive Wahhabi teachings, spread by countries such as Saudi Arabia which have seeped into this country’s soil, which ban the age-old custom present on the island and throughout the world of praying to the saints, large crowds of devotees of all ages come to ask for assistance with any plight or perhaps simply pray a yaseen or perform zikr in the presence of the saint. Practices flowing through the generations, the branches of a thousand family trees intertwined at the foot of a Ziyaram. Abeynaike’s image of the city by night is a confluence of colours, described best, perhaps, in the caption he sent in below;

What defines a community? Like the colours of the rainbow, our community is created from the vibrancy of timeless history. We are a mix of colours that redefine the meaning of the word “home”.  Standing on the top of the World Trade Centre, at lightning speed, 499 ft above the ground, these are the colours of our community! Madushanth uses the colour orange to represent the Buddhist order, and very simply titled this image ‘Searching For Wisdom’. We found the tranquility of the blue sky and comfort of the green vistas a perfect composition, allowing him a place in our mentions.

We had fun running our very first online photography competition, and we hope you enjoyed the results of it too.

Remember, Roar Showtime will return next month with a brand new theme!