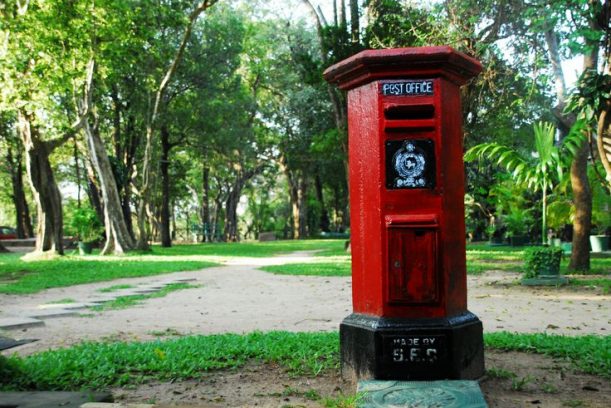 The image of neatly dressed postmen on bicycles seems to belong to the past, what with increasing dependence on modern conveniences like email, text messages and VOIP. Receiving a letter these days often means receiving a bill and that hardly counts as exciting. The Post, however, doesn’t consider itself an anachronism – particularly not in a country where internet penetration is mostly an urban phenomenon. Joining – or perhaps even leading – the fight to stay relevant is, oddly enough, Sri Lanka Post.

Is It Relevant, Really?

Out on delivery; will they soon become obsolete? Image credit: exploresrilanka.lk

If you live in the city, chances are your only interaction with the Post Office would be to refer to it as a landmark, or a place specially earmarked for traffic violation fines. Post office workers going on strike and other such incidents would strike you as amusing – what do you need the post office for, anyway? It’s not as if people actually send each other letters anymore, right?

The truth is a lot more complicated than that. While for most, epistolary greetings belong in a Jane Austen novel, the fact is that the volume of letters sent for individual purposes has remained roughly the same over the years. What has changed is the volume of business mail, which has seen a dramatic increase due to changing economic conditions. From between 2002 – 2003, 60 – 70% of all mail in Sri Lanka was for individual purposes, while 30 – 40% was for business purposes. As of 2016, there has been a reversal, with commercial mail amounting to as much as 80% and the balance 20% being sent for individual purposes. The number of individual letters has stayed roughly the same over the years, but the volume of business mail has increased exponentially in comparison.

For the urban population that seems to increasingly prefer going paperless, all this might not mean much. But that’s because we’re part of the 20% that seems to have replaced the need for postal services with alternative, technologically-driven services. The Post may not be of service for those of us used to paying their bills online or transferring money electronically, but the rest of the country has yet to catch up and that’s exactly where the Post Office comes in.

While the urban population may have limited interaction with Sri Lanka Post, 80% of the country’s population still continues to depend on it. Image credit Raiyyu Radzi

Sri Lanka Post has done its homework. According to Shervyn Senadheera, Additional Secretary to the Ministry of Posts, Postal Services & Muslim Religious Affairs, a survey conducted between 2013 and 2014 with a sample size of 1,122 participants found that only 15 – 18% of the population has the capability of getting their services online, through the internet, mobile phones and apps. The rest of the population faces immense hurdles in terms of language, computer literacy, access to hardware, and confidence with technology. Senadheera is of the opinion that whatever the technology introduced, basic problems like those mentioned above need to be addressed first. And there is truth to the statement: even a giant technological development drive will need to tackle computer literacy before the people can enjoy its benefits.

The Post has recognised this – they’ve recognised that 80% of the population has yet to reap the benefits of technology. They’ve also recognised that they have the best access to that 80%. The challenge they’ve risen up to, therefore, is bridging the gap between a swiftly changing world and those who are yet to change with it, for various socio-economic reasons. Their solution is rather simple, perhaps even elegant. As these changes aren’t likely to trickle down to them yet, they’ve started offering these services, acting very much like the bridge mentioned above. A classic example is the electronic money order service, which cuts down the hassle of documentation. While Senadheera himself agrees that this service is not perfect as yet – the ideal solution would be for the customers to never leave their houses at all – it allows for money to be transferred electronically, relatively seamlessly in comparison to the nothing-but-a-hassle manual money order service used before.

Electronic money orders are just the tip of the iceberg. Turns out, the Post Office offers insurance services, e-channelling and e-money, and has tied up with various financial institutions including HSBC to provide a variety of financial services. They even have a toll-free hotline, 1950, for some free troubleshooting, just in case. It doesn’t end there, however.

Did Someone Say E-commerce Delivery?

It’s hard to imagine a quaint building like this facilitating e-commerce delivery, but Sri Lanka Post is more than doing its part when it comes to keeping up with the times. Image credit: commons.wikimedia.org

Perhaps the biggest problems most e-commerce websites have are customer reach and delivery, especially outside Colombo. The Post seems to have realised this, too. Using their vast network, they’ve tied up with e-commerce websites like wow.lk to deliver catalogues of goods to households. The postman doubles up as a door-to-door waiter of sorts, taking down orders and entering them into a handheld device. The orders are then beamed up to the mothership and dispatched, making full use of the giant network of 652 Post Offices and 3,410 sub-post offices.

Essentially then, what the Post has become is a giant spider web. Rather than cowering under the pressure of technology and accepting defeat and redundancy, they’ve evolved by identifying some unique weaknesses in the system and by providing solutions to tackle them. They may not seem ideal to those of us used to more seamless services – the Post, after all, has to navigate through red tape and government bureaucracy, unlike most private companies. They are, however, offering people services they may otherwise not have had access to at all, while putting up a fierce fight to ensure that the lack of technological penetration doesn’t cripple a sizeable chunk of the country’s population.