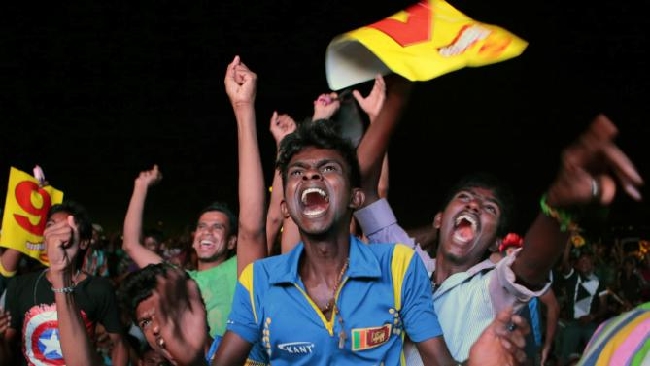 A month ago Twitter apparently educated people on stress, if the hashtags #StressAwarenessDay and #StressIn5Words that were trending on November 4 were any indication.

That got us thinking: what do we Sri Lankans have to stress out about? Nothing much, really, apart from politicians we voted to power who seem to have forgotten their promises, and the rising cost of living, and whether we’d ever win another cricket world cup now that Sanga and Mahela have retired and… oh wait.

Well anyway. The point we were getting to is this: we live on a really pretty little island in the sun. We’re (physically at least) removed from the rest of the world, left to our own little idyllic spaces of lush rain-forest, breath-taking mountainsides and amazing beaches. Hey, even a lot of foreigners who encounter real, live Lankans can’t seem to stop gushing on about how nice and friendly and laid back our people are.

But yes. We, too, have those times when we want to throw a tantrum, fling a plastic bottle across the room, or set something on fire. And not just those of us who are in Parliament. Sri Lankans do have genuine reasons to get stressed out, and in case you’re still in doubt, here’s a detailed list of seven things guaranteed to make any Sri Lankan hit the red zone on the average stress indicator, starting with the most obvious:

Once upon a time, the SLOGs (Sri Lankan Opinion Givers, i.e. aunties and uncles) tut-tutted in disapproval at the harrowing education systems in India, China, and the likes of which put so much pressure on their students to memorise entire textbooks, parrot out complex equations, and occasionally bag the Nobel Prize. Smug SLOGs would gravely nod and talk about how much better off we were, with our high literacy, free education AND relaxed lifestyles.

But today, who are we to talk, really? During exam season, it isn’t unusual for newspapers to inform us of at least one exam-pressure related suicide. If that’s not depressing enough, we needn’t look further than the long queues of parents desperate to get their child into a good school, or the high numbers of high school graduates desperate to ensure they secure a seat in university. And of course, in every situation, there’s almost always just one thing that will determine whether you move on, or (dare we say the F word?) fail; and that one thing is an exam. As a result, children are forced to spend more time at school and tuition classes than at home, and parents frantically cancel all extra-curricular activities and family events when exam season is two months away.

Also, around this time, anybody advertising anything seems to be capitalising on exam stress – from tuition teachers to Horlicks to Samaposha. Well, at least there are some groups of people who are free of this kind of stress. But don’t worry. There are other things they can fall victim to, like:

Or even just timings of any sort. Before you point out that this isn’t an exclusively Sri Lankan dilemma, let’s just go back a bit and reflect on that perception of how relatively chilled out Sri Lankans usually are.

It’s true; a lot of us do tend to take life easy, sometimes. Other times, we have to pull up our socks (or hitch up our sarongs/pin up our sarees) and actually show concern for things like punctuality, organisation, sticking to schedules and meeting deadlines. Which wouldn’t be too difficult, if it weren’t for the fact that while you may be at it, the rest of the country isn’t necessarily feeling the same pressure.

As a result, average deadline pressure turns into one-run-off-one-ball-to-win-against-India-level stress over simple things like Amma stopping you before you leave the house to ask you for the fourth time if you remembered to take a water bottle and/or go to the toilet; or the cheery cashier who’s taking forever to bill up your groceries; or your co-workers trying to engage you in an I-SAY-machang-did-you-SEE-that-amazing-century-Sanga-scored-last-night-against-West-Indies conversation (especially when the answer is so obviously “DUH, I watched the whole match, why else do you think I’m so behind on this project?!”); or even simply trying get to from point A to point B via the average Sri Lankan road…

…which brings us to:

Public transport in Sri Lanka is not exactly for the faint-hearted. Image credit: theshadesofsuccess.com

Actually, there’s way too much to say under this one sub-heading. We shall save that for another article, and instead move on to:

(Also known as hell in some local dialects.) We’ve all been there. (If you haven’t reached this stage in life yet, then please stop reading this and go enjoy your life while you can).

The average Sri Lankan life has a few interesting (and by that we mean stressful) twists:

Sri Lankan Uncles and Aunties can be nice sometimes. Other times, not so much. Image credit: Jehanr, Ask an Uncle, Ask an Aunty

We’re not referring to any aunty or uncle; we’re talking about the quintessential Sri Lankan aunty and uncle, identifiable by their a) nosiness b) constant desire to tell you what to do c) more nosiness

These specimens mostly prey on the young, and stressful encounters with them are of two kinds:

It’s all the more stressful when you have to answer questions of “SO what are you doing now, ah?” and “WHAT? No plans to settle down?!” in public.

If you’re not stressed out answering these questions (and dealing with the minor existential crisis you experience each time), then you’re stressing out about how best to avoid the dreaded aunty/uncle.

Here you’ll mostly have to do deal with the stress of stressed-out parents yelling at you to get the house in order and/or sacrifice your personal space for the aunty or uncle.

Either that, or you’re the stressed-out parent in this situation, in which case you get to yell at the kids until Aunty/Uncle shows up, after which point you plaster a smile on your face, welcome them into your lovely home, and be nice even if it kills you.

Best case scenarios: the aunty/uncle is a) someone you like, or b) coming from abroad, armed with chocolates for you

Worst case scenarios: the aunty/uncle a) stays for a month b) hates you c) keeps dropping not-so-subtle hints about “You know, Mrs. Perera has this nice son/daughter… such a smart boy/fair girl… shall I introduce you, darling?!” or d) all of the above.

Families are wonderful, but families are also stressful. Any Sri Lankan can attest to that. Family stress comes at you from everywhere, even when you least expect it, for instance when you are:

A Sri Lankan traveller’s nightmare looks something like this

It’s bad enough that you may be leaving loved ones behind; it’s worse when said loved ones are trying to insist you pack those 10 bottles of maasi sambol, 8 bottles of katta sambol, 30 boxes of Dilmah tea and 5 kilos of kaju – because how else will you survive away from home, ah?! And you absolutely MUST take some extra sambol jars for that nice aunty. And her nephew. And the nephew’s mother-in-law. They must be all missing Sri Lankan food, no?

Just try not to have a panic attack when you realise, 10 minutes before you leave for the airport, that your combined luggage is 11 kilos overweight.

Anyway, you don’t have to be a traveller to let Sri Lankan norms stress you out. Sometimes, even trying to chill out can be stressful. Don’t believe us? Think about what happens when…

Do you remember everything about that final match in the 2007 ICC cricket world cup, when Sri Lanka lost to Australia? If you don’t, it’s probably because we had a power-cut because some not-very-nice people flew their planes over Colombo in an attempt to scare everybody (which they succeeded in doing). Even if you don’t remember that incident in detail, chances are you remember feeling super frustrated about only being able to follow the match on a rickety old radio that the whole family and a couple of candles crowded around…

Sri Lankans DO NOT like being interrupted during, or being prevented from watching, their cricket matches. Hence, you can expect stress levels to peak if, at the time of a cricket match, one is also forced to deal with power-cuts, traffic, bomb-scares, an SLT internet connection, emergency work/Amma calls, maths homework, wailing infants, or a coconut falling on your head.