Ah, rush hour. That time of the day when tempers run high, traffic laws disintegrate, and hapless commuters are subjected to the agonising grind of our madcap Sri Lankan traffic.

Commuting in Sri Lanka is the stuff of nightmares. The exhaust fumes from Colombo alone can probably melt half the world’s polar ice caps. Rickety buses race each other like contenders in the Grand Prix. School vans obstruct traffic by stopping for pick-ups smack in the middle of the road, enterprising motorcyclists (some of whom frighteningly manage to fit in all three of their kids, complete with school bags and water bottles, on the same vehicle) annoy the hell out of everyone with their creeping and squeezing tactics, and three-wheelers live up to their well-cemented reputation by gaily breaking laws left and right. In spite of traffic lights, traffic plans, and traffic police, chaos reigns, and any semblance to law and order is thrown to the winds. You do not want to get caught in this traffic jam in Slave Island- and this is one of the milder hold-ups. Image courtesy: newsfirst.lk

With a total vehicle population that surpasses the 6 million mark (6,795,469 to be precise), nearly all the major cities in this small country suffer from a crippling traffic congestion problem. Being the commercial capital of the country, Colombo is probably worst hit by this crisis. Statistical data show more than 500,000 vehicles entering Colombo every day, carrying up to 1.8 million people. Add to these figures the already existing traffic from within the densely populated city itself, and we have got ourselves a veritable vehicle soup of exhaust fumes, high tempers, honking horns, screeching brakes, and revving engines.

So for the sake of letting off some steam, here is a rant on the insufferable things that drive our commuters up the wall. 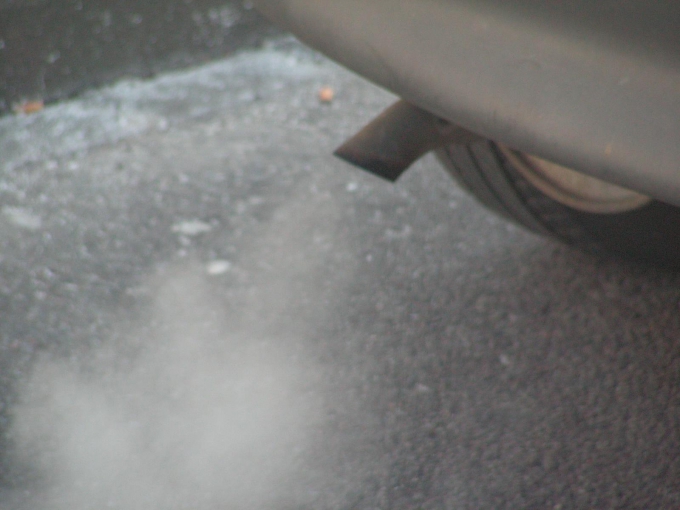 Out with the gas masks! Exhaust fumes from vehicles contain carbon monoxide, nitrogen oxide, sulfur dioxide and other gases detrimental to both health and environment. Image Courtesy: Wikipedia.com

You know how people say that walking to work is a healthy habit? That it can leave you feeling fresh and energised? Well, that doesn’t apply to Sri Lankans, not unless you live in a mountain, jungle, or village area anyway. All that smoke and exhaust gas produced by traffic are potent enough to knock out a herd of elephants, leave alone the hapless commuters who are forced to breathe in those vile fumes. Just five minutes of continuously inhaling this noxious, dust-filled air, is enough to make your head spin and your lungs shrivel up. Plus, all that smoke and dust will not be doing your appearance any favours, so you end up going to work or school looking like you’ve been through a war. All you vehicle owners who haven’t taken your gas emission tests: please take them before you kill us all. Out of our way! A typical Sri Lankan bus race. Image Courtesy: wehearit.com

Here’s a question which has often left us tearing our hair out: why do local bus drivers have this eternal urge to race each other? Unfortunately, we don’t really have the answer to that, and we don’t think we ever will. It’s a sort of deeply imbued mental complex unique to our local bus drivers ‒ if they see another bus, a reflex reaction is triggered. Adrenaline surges, feet find accelerators and an impromptu bus race is suddenly happening right in the middle of a traffic jam.

It’s a common enough sight on our roads ‒ two arthritic metal behemoths racing each other like bats out of hell, horns blaring, music booming, careening around corners and ploughing through traffic like there is no tomorrow, not caring who they kill on the way. With a total bus population of 104,104, there are a lot of mad competing monsters in this country, each having their own Grand Prix events in the middle of rush hour. Strangely, that underutilised concept known as “traffic law” doesn’t seem to apply to them at all. 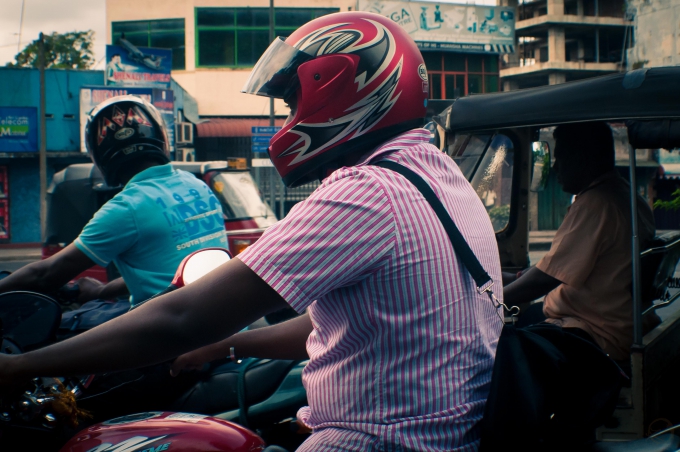 Motorbikes are small and pretty handy when it comes to navigating small spaces. However, small does not mean insubstantial, and motorcycles aren’t made of smoke. They are, in fact, pretty solid, and can crash just as solidly as a truck. Regrettably, most motorcyclists don’t seem to realise that. On the contrary, they appear to be labouring under the delusion that their vehicle can creep into every available 6 inch space with ease.

At present, Sri Lanka has a whopping 3.7 million motorcycles and 1.1 million motor tricycles. When it comes to the traffic problem, this, theoretically, should be a good thing. After all, motorcycles take up a lot less space than, say, cars or vans. However, it would be nice if motorcyclists remembered that their nifty little vehicles are not insubstantial, and that their eternal attempts to slide into microscopic spaces is the bane of every commuter in the vicinity. Getting on everyone’s nerves is what tuk-tuks do best. Image courtesy: informedinfrastructure.com

Tuk tuks are tuk-tuks, need we say more? Like buses, they too are above the law (or so they like to think anyway), and like motorcyclists, tuk tuk drivers too think that their vehicles are made of smoke. In fact, their madcap antics need neither mention nor description ‒ every Sri Lankan is far too familiar with them already. A single three-wheeler is capable of causing a 2 km long traffic jam or a massive vehicle pile-up (or both) in just a matter of a few seconds. 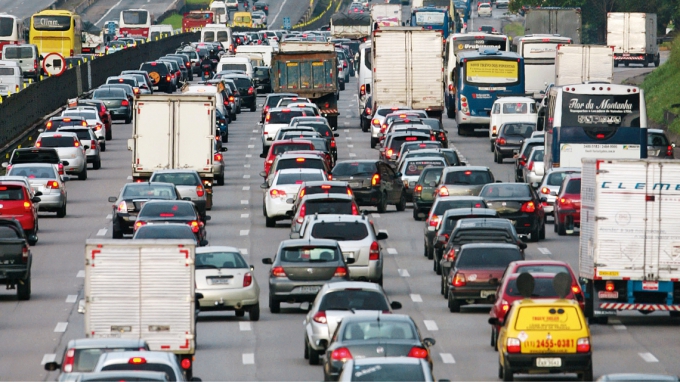 The number of cars on our roads are fast increasing, largely contributing to our escalating traffic problem. Image courtesy: basf.com

One of the biggest contributing factors to the country’s traffic problem is the large population of private vehicles on our roads. For example, out of the 500,000 vehicles that enter Colombo every day, a whopping 450, 000 of them are private transportation. The year 2016 itself saw 45,172 new motor car registrations; that’s a whole lot more than the 23,000 registrations recorded in 2010. Here lies the root of the problem ‒ there are way too many private vehicles on the roads, and far too few public ones. One of the calmer bus scenarios. Is that girl in orange fainting from all that body odour?. Image courtesy: fredricomerlonet.wordpress.com

This can very well be classified as one of the most grueling experiences on the planet. Taking the bus can have its perks ‒ it’s cheap, for one thing, and buses run pretty much everywhere in the country ‒ but other than that, the bus experience is something akin to torture. In addition to being packed like a sardine in a can (probably with someone’s umbrella in your eye, or hand-bag digging into your kidney), the typical Sri Lankan bus driver will keep you in a constant state of panic with his mad antics (refer Rush hour Grand Prix). If you are a female, there’s every chance that you could get flashed at, chatted up, groped, or even a dangerous combination of all three just between one stop and another. Then finally, there is the blaring music; we are not very sure what purpose it serves (it certainly can’t be entertainment, because we are yet to see anyone looking remotely entertained on a bus), but if you don’t have a headache when you get on the bus, then you will certainly have one when you get off. The proverbial sardines in the can have it better than these poor commuters. Our trains are so overcrowded that people are literally spilling out of their doors. Image courtesy: ft.lk

We do have a rail system, but our decrepit trains are older than our grandmothers, and the train commuting experience is generally no less enjoyable than the bus experience in terms of overcrowding, inconvenience, and discomfort. In fact, their dismal state of disrepair means that during rainy days like these, soggy commuters must even suffer through wet seats and leaking ceilings. Plus, the day a train actually arrives on schedule will be the day hell freezes over, as they don’t seem to have the foggiest notion of time whatsoever. The rail system is also under-utilised, under-staffed, and ancient, and is operating at a huge loss. The government should keep Gustavo Petro’s quote in mind and remember that a truly developed country is not a place where the poor have cars. It is one where the rich use public transportation.

The current commuting problem is more than just an annoyance to hapless citizens; it also pollutes our air and costs the country colossal economic losses ‒ around Rs. 500 million in fact. However, tempting as it is to let loose another tirade about the Government’s negligence towards the problem, we must admit that they haven’t remained completely bone-idle about it. Besides the new proposals for improvement that tend to briefly break the surface now and then (like the latest Rapid Transit System project), the Government has built flyovers, expanded roads, implemented various traffic plans (which are usually abandoned after a month or so, but heck, at least they tried) and slapped crazy tax rates on vehicle imports. However, these changes have hardly made a discernible dent in the situation.

For the sake of our sanity, the environment, and the massive economic losses incurred, the Government should look for ways to solve this commuting problem before it spirals out of control. Fast.