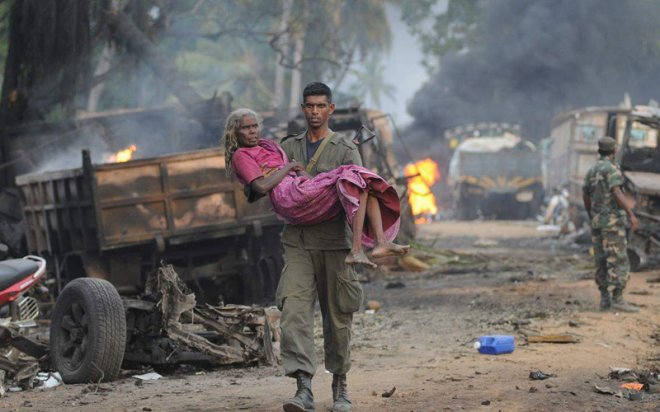 The Invisible Wounds Of War And Disaster – PTSD In Sri Lanka

Despite being an oasis of tropical tranquility, Sri Lanka is no stranger to strife. The country’s past has been plagued through the ages with more conflict than can be counted, the most recent being the civil war that spanned nearly three decades. The island has also been battered constantly and mercilessly by natural elements, from the 2004 tsunami to the recent floods, landslides, and drought. One of the greatest impacts of these events has been the human cost. Extending from 1982 to 2009, the civil war killed an estimated 80,000 to 100,000 people, including both combatants and thousands of civilians. The tsunami, which was the worst recorded natural disaster in the history of Sri Lanka, killed over 30,000 people and affected 800,000 more.

Both natural and anthropological disasters have wreaked havoc on the island, laying waste to hundreds of homes and infrastructure. However, some of the worst damage left behind by these catastrophes is the massive psychological toll on survivors, resulting in a spike in mental health disorders such as depression, anxiety, and post-traumatic stress disorder (PTSD). Initially these illnesses, particularly PTSD, went undiagnosed due to a lack of relevant awareness and information. More recently, because of an increase in awareness, studies have been done to map PTSD among those who survived the civil war and the tsunami, providing some insight into the extent of the psychological effect of traumatic events within the Sri Lankan population.

Post-traumatic stress disorder was known during the World Wars as “shell shock”, and was common among those who witnessed or took part in combat. It was first classified by the American Psychiatric Association in the Diagnostic and Statistical Manual of Mental Disorders as a standalone mental illness in 1980. It is a psychiatric disorder that can develop when one has experienced, witnessed or learned about a dangerous or traumatic event, like war, natural disaster, sexual assault, torture, violence, a traffic accident, death of a loved one, or any other life-threatening or distressing incident. While most people feel shock, fear, panic and distress during and immediately after a traumatic event, there are some who never recover from it and go on to experience lingering feelings of trauma for a prolonged period of time. These individuals are likely to be suffering from PTSD, and may feel distressed and anxious, even when they are in a safe environment and removed from any danger. According to the U.S. National Centre for PTSD, one in seven or eight people develop PTSD at some point in their lives, with women more prone to it than men. Given that such a large portion of the Sri Lankan population has experienced a natural disaster or armed conflict, it is no surprise that the diagnosis of PTSD in Sri Lanka has risen significantly.

The civil war in Sri Lanka left many wounds, but not all of them are physically evident. Image source: rufreeman.com

When a person experiences two or more of the following symptoms for at least a month after experiencing a traumatic event, provided it is not due to substance abuse, head injury or any other physical illness, he or she can be diagnosed with PTSD:

PTSD often manifests with depression and anxiety, and sufferers may be prone to substance abuse and self-harm. Some people may even attempt suicide. To be diagnosed with PTSD, the condition must have a significant negative influence on the sufferer’s work, social interactions, and personal life.

Children may display different symptoms of PTSD, which include sudden bed-wetting, losing the ability to talk, re-enacting the traumatic event while playing, and becoming unusually clingy or terrified of abandonment. Older children can start acting up, and display reckless, self-destructive, or disruptive behaviour.

Sometimes symptoms may not even appear till months or years after the event. Not everyone who has undergone a traumatic event develops PTSD, because everyone reacts differently to trauma and some people have better coping mechanisms. People who develop PTSD often already have one or more risk factors that make it more likely for them to develop the disorder, such as prolonged exposure to trauma, negative experiences earlier in life, lack of a strong support system, or a prior history of mental health illnesses like anxiety and depression.

PTSD can be screened via a psychological evaluation by a health professional, based on a standard set of symptoms of the disorder. Speaking to Roar Media about the treatment options currently available in Sri Lanka, counselling psychologist, Nivendra Uduman said, “[Psychotherapeutic treatments for PTSD] include trauma-focused cognitive behavioural therapy, narrative exposure therapy, as well as eye movement desensitization and reprocessing therapy, which are administered by qualified psychologists. However, this is only in the metropolis. There aren’t many treatment options available in other regions around the country. Pharmacological interventions are also used in the treatment of PTSD, along with psychotherapy.”

With proper treatment and support, some sufferers recover within six months. However, others take longer to improve. People with PTSD can greatly benefit by exercise and physical activity. As in any other mental illness, it is important for the affected individual to have a supportive and nonjudgmental environment.

25% of the children living in the northeast of Sri Lanka were reported to have PTSD, as a result of the civil war. Image source: channel4.com

A number of studies have been carried out in Sri Lanka to assess the mental health of those who were affected by the civil war and the tsunami. A large number of people living along the coastal regions of the island lost their family members, homes, and livelihoods in the Boxing Day tsunami. Similarly, tens of thousands of people, including combatants, civilians, and families of combatants, were left wounded, disabled, bereaved, or internally displaced by the war. Dozens of women reported that they had experienced sexual assault at the hands of soldiers during the conflict.

A survey carried out from 2002 to 2006 at the Military Hospital Colombo during the sectarian conflict evaluated the incidence of PTSD among 824 soldiers who were on active duty. The results showed that 6.7% of the study group were suffering from PTSD. Another study done in 2010 estimated that 10.5% of soldiers in the Sri Lankan Army were suffering from PTSD. In addition, a research published in 2011 found that 7% of the people living in 1,517 households and two refugee camps across the Jaffna District had PTSD, while 22.2% of them had depression and 32.6% had anxiety as a result of the war. In the same year, another study evaluated the mental health of 135 married females in the North, who had lost their homes in the conflict. The study found that 57% of the participants were suffering from PTSD, due to poor living conditions, economic hardship, and loss of a loved one, among other reasons. It was also indicated in a 2009 dissertation that 25% of the children in the Northeast met the criteria for PTSD.

Similar studies done after the tsunami also show an increase in the prevalence of PTSD, anxiety and depression among those affected by the disaster. An assessment conducted 20-21 months after the tsunami showed that 21% of the adult respondents to the survey had PTSD. A 2008 study carried out with adolescents living in tsunami impacted areas revealed that 25% met the criteria for PTSD. While an assortment of psychosocial interventions were carried out by local and international welfare groups immediately after the tsunami, many of these failed because of a poor understanding of the cultural beliefs of the locals by those administering the programmes.

The Boxing Day tsunami left widespread destruction and death in its wake, resulting in a spike in the prevalence of PTSD. Image source: socialmediagidsbz.nl

It is assumed that the prevalence of disaster-related PTSD is not as high as could be expected in a disaster-prone country like Sri Lanka because of strong community ties, as well as the tendency of locals to help others foremost in a crisis, rather than on focusing inwards. However, this may also be because the disorder tends to go unremarked and under-reported, either because of a lack of awareness or social stigma. PTSD can manifest as alcoholism, an abusive personality, or depression, making it harder to diagnose. Many men, especially ex-combatants, with the disorder tend to avoid vocalising how they feel and instead, resort to violent, erratic or addictive behaviour to express their frustration.

“PTSD is quite prevalent in military personnel who have been exposed to the war,” Uduman told Roar Media, “Yet, its diagnosis and treatment is often neglected, as there is a shortage of mental health professionals in the military.” The psychologist from Samutthana, who organized a mental health awareness walk across the country last August, further explained, “I met military personnel who displayed symptoms of post-traumatic stress disorder when I stopped at military camps during [my walk]. However, most of them were not seeking treatment and a small percentage of them were not complying to treatment. The lifestyle inside military camps may also be a contributory factor to the exacerbation of symptoms.”

It is not only the military who go undiagnosed. The constant and repeated exposure of the country to sectarian conflict and natural disasters increases the likelihood of a further increase in PTSD among the Sri Lankan population. However, the psychosocial state of disaster victims tends to go unnoticed in the hurry to resolve the more practical issues of rescue work, administration of medical aid, distribution of basic essentials, and rehoming of those displaced. Faced with the more tangible problems of loss, poverty, and homelessness, PTSD sufferers internalise their deteriorating mental state and try to appear outwardly stoic, while adopting unhealthy coping mechanisms. Thus, PTSD becomes an invisible problem that remains undiagnosed and untreated for years, causing untold agony and suffering to trauma victims and their loved ones.