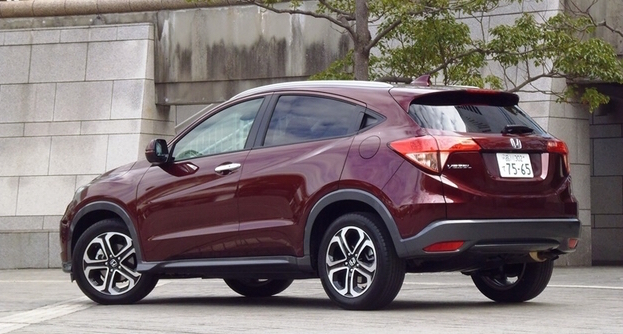 There was a time in Colombo when during rush hour all you would see were Toyota’s Allion; a comfortable, fuel efficient and good looking car that came at a reasonable price. Also, being a Toyota, it automatically registers with the Sri Lankan mentality of being reliable. With the post-war euphoria and the economic boom, the roads of Colombo only got better looking with the BMW X1 and the BMW 5 series crowding the streets, but still not as popular as the Allion or its newer cousin the Axio. Since then, there has been no other vehicle that has taken the island or the country by storm…until now.

In Late 2013, Honda revealed the Vezel to the world at the Paris showcase. It was beautiful, with a smooth, well-toned body that was slightly lifted off the ground giving her a meaner, confident look. Fitted with a hybrid engine she was kind to mother earth as well as the average Joe’s wallet. Being fuel efficient in Sri Lanka is a priority with the fluctuant prices, a good looking car won’t hurt and the pride of owning a Honda (considered to be a more expensive Japanese car) made the Vezel very popular, very fast. The fact that the Vezel is a subcompact crossover and part of Honda’s “Urban SUV Concept” gives it an appeal that makes it favourable over other hybrids on the market.

The Vezel hit the shores of Colombo with a price tag of 5.7 million Rupees. The fact that it wasn’t a Prius, which for some reason gets a lot of lash for being a green car, was an added advantage. The entry of the Vezel forced a lot of other hybrid cars to reduce their prices. The Toyota Aqua dropped 4.5 million (brand new) to almost 4 million. The Prius dropped even further. The Honda Fit was also affected as many opted to purchase its cousin the Vezel for a higher price. At the time of writing certain models of the Vezel can be found for as low as 4.9 million.

In September 2014, Honda Japan recalled over 175,000 Vezel and Fit cars that had software errors that caused the engine to continuously accelerate. Honda Sri Lanka encourages Vezel owners to bring the vehicles in for a check-up that will cost only 5,000 Rupees. With this they will be updated to the latest, problem free software. This process has been made efficient and easy and kudos to Honda Sri Lanka for ironing out this kink and ensuring that the Vezel continues its journey in Sri Lanka.

The Vezel’s popularity is mirrored by factors such as price, look and fuel efficiency. To the Sri Lankan who is looking for their next ride, a Vezel is a great choice. Next time you’re commuting, count the number of Vezels on the road. The number will Vezel you.