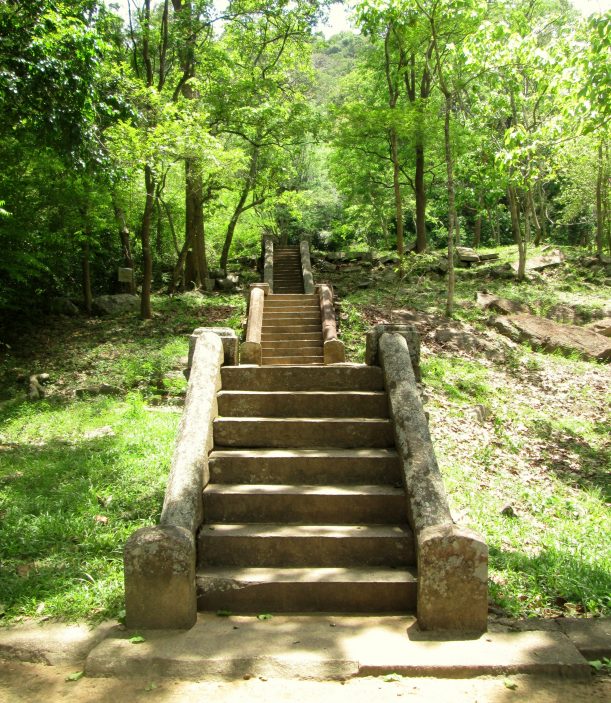 Trying to get away from the humdrum of daily life, but don’t want to go to the beach or up-country? How about a long walk in a quiet forest monastery instead?

Located 24 kilometres away from the Kurunegala town, along the Kubukwewa-Madalanda road, Arankale is a forest monastery now in ruins: an ideal place  for architecture and archaeology enthusiasts. Though frequented by the local villagers, few outsiders seem to know of its existence. One can simply walk in and explore the monastery, or speak to the monks of the Maliyadeva Aranya to learn more about the monastery and the stories it holds.

Bathed in the silence of the forest and nestled among the age-old trees, this is a place where monks for generations have sought to attain nirvana. The Arankale monastery is completely separated from the busy commercial world of today: one is taken back to a simpler age, and transported to a state of meditation among the ruins of a great forest monastery.

A ‘Pansakulika’ monastery, the name Arankale may have been derived from the Arahan, meaning enlightened pupil of the Buddha, after the Arahan Maliyadeva who is believed to have lived here, and after whom the monastery was established. Aranya and Kale both mean forest.

Pansakulika monks follow extreme austerity and take a vow of piety. They live on the bare necessities of life in small, unadorned structures called kuti (the dwelling place of monks), located deep within the jungle. Although 1,200 monks were supposed to have resided within the monastery’s premises during its prime, only 43 remain today.

Scattered across a few acres of forest land, the most striking feature is the two-kilometre meditation walking path that runs the length of the premises. This structure is slightly elevated off the surrounding forest bed, in some areas up to 5 feet in height, with stone walls and a soft sand paving.

One may enter through the modern monastery and walk through a jungle path to the Maliyadeva cave. Named after its first resident, this consists of three beautiful chambers with slit windows and stone blocks for seating. Monks meditate within these cave-like chambers even today.

Stairways leading to Pathanagara on the right side of the path. Image courtesy writer.

A right turn from the Maliyadeva cave will bring you to the beginning of the said walking path, which thereafter runs across the premises. On to the left of the walking path are the Pathanagaras (or meditation chambers)of the monks. There are supposed to be 20 caves and Pathanagaras within Arankale, of which some have now been overrun by vines.

The main monastery buildings lie to the right of the path. A Pathanagaraya is found in a clearing adjoining a roundabout in the path. Constructed on a rock boulder is the ordination hall. Surrounded by a small moat, the water helped cool the interiors during the day.

The double platform buildings are a principal feature of such pirivenas. Two raised stone platforms surrounded by water are linked together by a stone bridge leading to the center of each platform, with a flight of steps on the other side.

Overrun by reeds and lotus, is a beautiful rectangular bathing pond with stone steps leading down to the water from all directions. Though filled with mud and unsafe to bathe in now, it would at one time have been a stunning location, providing a relaxing dip, with the mountains and trees serving as a backdrop.

The monks strived to remove themselves from all worldly interests and adopt the most austere religious practices and severest simplicity.

A natural pond, one of many in the area. Image credits: Damith Peramuna

The Arankale aranya is located at the foot of the ‘Dolukanda’ mountain. This mountain is profusely rich in medicinal plants, similar to Ritigala and Dolukanda. For that matter, Arankale is one of the few such remaining locations within the country with such valuable and rare medicinal plants. There is said to have even been a hospital of sorts for Ayurvedic treatment.

Kurunegala is more of a pilgrimage destination, home also to Athagala, Ridi Viharaya, and the Samadhi Buddha statue (interestingly, the world’s tallest granite Samadhi Buddha statue), so if you want to get away from the bustle of modern civilisation, but don’t want to travel as far as Anuradhapura, heading towards Kurunegala might be your best bet.

Note: Wearing white is not mandatory when visiting the monastery, although relatively conservative clothing is advised.