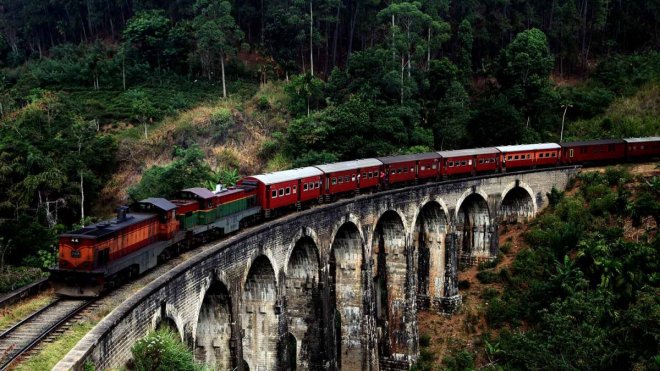 Ella was once a quiet village in the Uva Province. In recent times however, the town has transformed into one of the island’s upcountry hotspots. The influx of tourism has seen Ella morph into a backpacker hub, effectively positioning itself as the “Hikka of the Hills”. Travellers flock here for the cool climes, stunning views, and adventurous hikes, but many may not be familiar with the stories along its railway line.

Undoubtedly, the most scenic route to Ella is by train. After Nawalapitiya, the train begins its ascent into the central highlands, snaking through tea plantations as it reaches Pattipola, the highest broad gauge railway station in the world. Onwards, the line begins an acute descent into the Uva Province, terminating at Badulla. Ella is the last major stop before Badulla, but just beyond, lay two historic marvels of railway engineering.

Now a popular Instagram location, the 20th century Nine Arches Bridge sits between the Ella and Demodara stations. Commissioned in 1921, the bridge is built at an altitude of 3,100 feet above sea level and stands almost 100 feet tall. In Sinhala, the structure is referred to as the Ahas Namaye Palama, or “Nine Skies Bridge” because of the nine skies one sees through the arches beneath the tracks.

The magnificence of the structure lies in the fact that it was built entirely out of rocks, bricks and cement. A common origin story recounts the unavailability of steel, because the assigned consignment was used for World War 1 at the time. The story continues, where a local villager by the name of P.K. Appuhami befriended a British official after unintentionally scaring him in a devil costume near the Ohiya railway station. The friendship eventually won Appuhami a contract to build the bridge that the British were unable to start.

Appuhami, having never built a bridge previously, is said to have put together a team of labourers who first carried rocks to fill up a problematic quagmire at the base, then upon it, built the large brick columns that we see today. The British, on the other hand, were concerned about the integrity of the bridge because there was no steel reinforcement that secured the columns into the ground. The lower cost of construction did not help, either.

But Appuhami thought otherwise. He confidently declared that he would lay under the bridge when the first train passed over, to prove that it was safe for travel onwards to Demodara. The rest is history.

Once the British reached Demodara, however, they faced another challenge. At the time, the Ceylon Government Railway allowed a maximum inclination of 1:44 (1 foot per 44 feet), and the elevation around Demodara’s hills were too steep for the tracks to be laid.

The solution is credited to the father of hydro-electrical power in Sri Lanka, Devapura Jayasena Wimalasurendra. Said to be inspired by a local farmer who suggested building the tracks the way his turban was tied, Wimalasurendra went on to design a railway loop that winds around the mountain, and through a tunnel that inclines to match the elevation on both ends. A model of the loop can be examined at the Demodara station.

If you are travelling from Ella, the Nine Arches Bridge can be reached by a short tuk-tuk ride from the town, or an adventurous two-kilometre hike through tunnels along the railway tracks. Several vantage points can be found around the bridge for photo opportunities, including a small eatery.

From the bridge, you can hop back in your tuk-tuk or continue trekking for 4 kilometres to the Demodara station to walk the loop. The Demodara Loop is also said to be the only railway loop in the world that features a tunnel directly below the station, which can be seen from the station grounds. If you’ve arrived by car, tuk-tuk, or train, a short downhill walk from the platform will lead you to the tracks. Be sure to check the train schedule before your visit to both locations to plan photo opportunities and also for your safety, as there is only one track, but several tunnels.

Built nearly 100 years ago, both of these railway feats have since been hailed as civil engineering marvels in Sri Lanka, as seen in commemorative stamps released in 2014. Definitely worth a visit on your next trip to Ella!