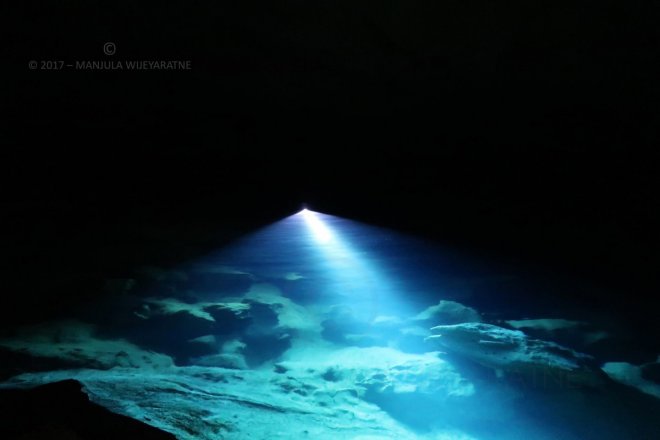 You would be hard-pressed to find anyone disputing the allure of Ella — a misty, windswept, and picturesque region of caves and waterfalls, approximately eight hours away from Colombo. Ella is also home to an intriguing set of ‘secret’ waterfalls, caves, and underwater ponds that are off the tourist trail and also difficult to access.

Most of the pools and caves in the area are frequently tied to legends of King Ravana and his rendezvous with the abducted Princess Sita. Apart from the well-known Ravana Caves, a more recent discovery in the area are Ravana’s Underwater Caves, also known as Nil Diya Pokuna or blue water ponds. The name is quite self-explanatory, owing to the startling, vibrant blue of the waters.

The eponymous nil diya pokuna, which leads to a couple of underwater tunnels.

Initially, there was just one mode of entry known to explorers: through a cave in Karandagolla. A second entryway was discovered recently. Definitely, for the more adventurous, this involved dropping (or climbing) vertically down a hole in the ground—an abyss that has been called hulan kapolla for a while, because of the gusts of wind blowing out of it.

The entrance through the hulan kapolla was discovered by Meththananda, a well-known guide in the area. With 17 years of experience in leading people down tunnels and caves, Meththananda was the one who accompanied Dive Sri Lanka on their expedition to map the underwater caves.

“It’s only been around three years since we discovered the second entrance,” he told Roar Media. “When I initially went down, I didn’t use ropes or anything. We’re used to the area, so I just climbed down. However, a lot of people find it very difficult so we use aids for safety measures,” he said. He added that now there are ropes strung up within the tunnel complex itself, to make it easier and less intimidating for people.

The equipment used for the expedition. Photo courtesy, Youtube.com

According to accounts from travellers, the hole leads to an enormous, pitch dark cave which is over 20 feet high and wide, which in turn leads to a labyrinth of other caves of differing sizes. The walls are of a rough and rocky texture, causing bruises easily. The caves are also full of little insects. Attracted to light, they converge on the torches and headlamps, necessitating dim lights and facemasks.

The eponymous pond can be found after scrambling through crevices and sometimes even crawling on all fours.

Discoveries And Challenges Down Under

A few months ago, a group of people including well-known shipwreck explorer and recreational diver, Dharshana Jayawardena, attempted to map the caves. The team conducted two dives, one for each tunnel branching off the bottom of the pond. The first dive lasted 44 minutes, whilst the second was 22 minutes long.

An artist’s representation of the path leading to it, and their subsequent discovery

Moving through years of previously undisturbed waters proved difficult. The only source of light to cut through the darkness was what their torches were able to produce, and even this was obstructed due to silting. Jayawardena pointed out the existence of halocline—a cloud of sediment in the water—that obstructed vision. Having spoken to a geologist about it, he learnt that this was an indication that the water within the underground complex came from an outside source, and could be connected to a water table. This speculation was reaffirmed by the fact that the water and the air were both fresh. “If there’s a closed system, there’d generally be a pungent smell. The freshness of the water and air implies that there’s an outflow somewhere,” he said.

Another unexpected challenge was the water temperature. The divers were prepared for 26° C at the most, but water temperature at the bottom of the cave turned out to be 23° C—and Jayawardena was in the wrong diving gear for it.

The team managed to measure the cave’s depth up to 70 feet and found that it seemed endless and continued deeper. Based on similar dives in other countries, he speculates that this cave would probably be between 100 – 160 metres deep.

“There were no life forms in the parts of the caves that were explored. The first 30 metres or so from the entrance of the rabbit-hole had a few bats, grasshoppers and other insects, but nothing beyond that,” he added.

Despite hardcore trekkers and backpackers making their way to the pond, we don’t have any additional information or resources about the caves underlying the hills of Ella. When we contacted the Geological Survey and Mines Bureau, we were informed that there was no information available on either the nil diya pokuna, or the existence of any other underwater tunnel system in Sri Lanka, and that very limited geological surveys had been done.

The excursion by Jayawardena and his crew is the first-known attempt at mapping it out, and even so, its extent is still a mystery. The trek is arduous, and definitely not for the uninitiated. Diving there isn’t recommended, unless one is a certified cave diver—Jayawardena pointed out that being a scuba diver and cave diver requires two completely different skillsets. Given that there’s barely any information about the caves, he and his team hope to dive in and map out more next time.