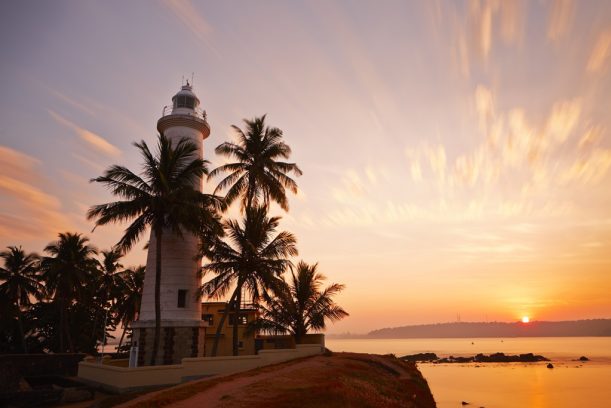 Five Sri Lankan Lighthouses That You Must Visit

The tall majestic structures around the island’s coasts were built to serve as an aid for navigation, and to warn marines of hazardous coastlines. They often stand in isolation doing their job, but the towers are not mere sources of light; lighthouses can also be great pieces of art. Although relatively unknown, many of Sri Lanka’s lighthouses hold a rather special place in the country’s history.

Globally, lighthouses make great tourist attractions as they provide panoramic views of scenic locations, mostly on the coastline. As a result, many countries have carried out initiatives to promote lighthouses as tourist destinations and are enhancing facilities for tourists.

Sri Lanka, being an island that attracted a great many visitors to its shores, saw the need for lighthouses for smooth navigation at an extremely early point in history, and many were built over the course of time. The island boasts around 25 lighthouses, although people aren’t always aware of them.

These towering houses of light aren’t usually a part of the average travel itinerary, but some of them are definitely worth a visit.

Sri Lanka’s tallest lighthouse is situated at the island’s Southern-most tip, in the Matara District: the Dondra Lighthouse stands 54 metres (161 feet) tall, adding a sense of grace and majesty to this beautiful tourist destination. It’s also one of the tallest lighthouses in South East Asia. Its characteristic is a white flash every five seconds, with a range of 28 nautical miles. It was commissioned in March 1890 and designed by renowned English civil engineer, Sir James Nicholas Douglass, and constructed by his brother, William Douglass of the Imperial Lighthouse Service. The granite stones used to build the striking white octagonal tower were brought all the way from the quarries of Scotland and Cornwall, a legacy left by the colonisers for the admirers of architectural wonders.

The lighthouse is open for public viewing but permission has to be obtained from the Ports Authority. The vision from atop the lighthouse is itself definitely worth the trip down south: a magnificent 360 degree view of the indigo seas, dotted lines of ships and boats, the glistening beach, and perfect rows of coconut trees, all amid roaring winds threatening to sweep you off your feet.  It’s one of the five internationally known lighthouses in Sri Lanka. Apart from sunbathing and taking dips in the crystal waters of the idyllic location of Dondra, this beauty will most certainly add colour to your trip.

Located on Barberyn Island on the southwest coast of Sri Lanka, a ten minute boat ride will take you to this lighthouse, away from the bustle of the mainland. The grand yellow tower stands at the edge of a cliff battered by waves and wind. The small island, covered with a thick growth of coconut and various other trees, is itself a paradise of sorts. From a distance you will see the small white steeple jutting through the trees. Few light keepers are entrusted with the maintenance of this graceful structure, which remains in excellent condition.

Built by the British, the structure is 110 feet tall with round, yellow embossed stones gracing the peripheral looks. Till 1972 it was maintained by the British until the Imperial Lighthouse Service ceased its operations. The glass at the tower is the original glass installed by the British in 1928, which pays a grand homage to British engineering and architecture.

Next to the tower is a small stone house built during the British era, and some of the equipment used by the British are still to be found in good condition.

For somebody who’s interested in beautiful structures and a bit of history, it’s not a tiresome journey to make: a 45 minute drive from Colombo to visit the island and check out the lighthouse will definitely be worth it.

Located on a reef 13 km off the coast of the Yala National Park (near Kirinde), the two reef lighthouses are only a very short distance apart. Both offshore lighthouses stand on two rocks, and were designed by Sir James Douglass and constructed by William Douglass.

Great Basses was commissioned in 1873 and Small Basses was completed five years later. Both are located in great diving spots of the Southern seas of Sri Lanka, where the beauty of the reef – described as the ‘Garden of Eden’ – can be found underwater. Sinking beneath the waves, the paradise comes alive with beautiful coral reefs, sea creatures, sandy plains, and many other lost treasures. Several ship wrecks and formations of sandstone rocks can be found near Great and Little Basses.

The two towers are still in operation, and survived the 2004 tsunami with modest damages to the bases.

The lighthouse at Galle Fort is believed to be the oldest in Sri Lanka. Image courtesy freefortourists.com

Galle lighthouse, also known as Pointe de Galle Light, is an onshore structure often flocked to by tourists throughout the year. Located inside the Old Dutch Fort, it is believed to be the oldest lighthouse in Sri Lanka, and was built in 1848. Unfortunately, a fire destroyed the original structure in 1936 and the current tower was built in 1940. The British Library has the only surviving photo of the original lighthouse.

The iconic landmark is the most visited lighthouse in Sri Lanka and offers a magnificent view of ships and boats entering the Galle harbour.

Although these are the five internationally known lighthouses in Sri Lanka, the island’s shores are dotted with more lighthouses just waiting to be explored. Some are sadly already in ruins, like the Old Mannar Island Light, but they are still beautiful in their own way, standing testament to the bits and pieces of history they were a part of. If you wish to escape to a place of calm, these tall giants will guarantee you some peace and quiet, save for the sounds of the sea.