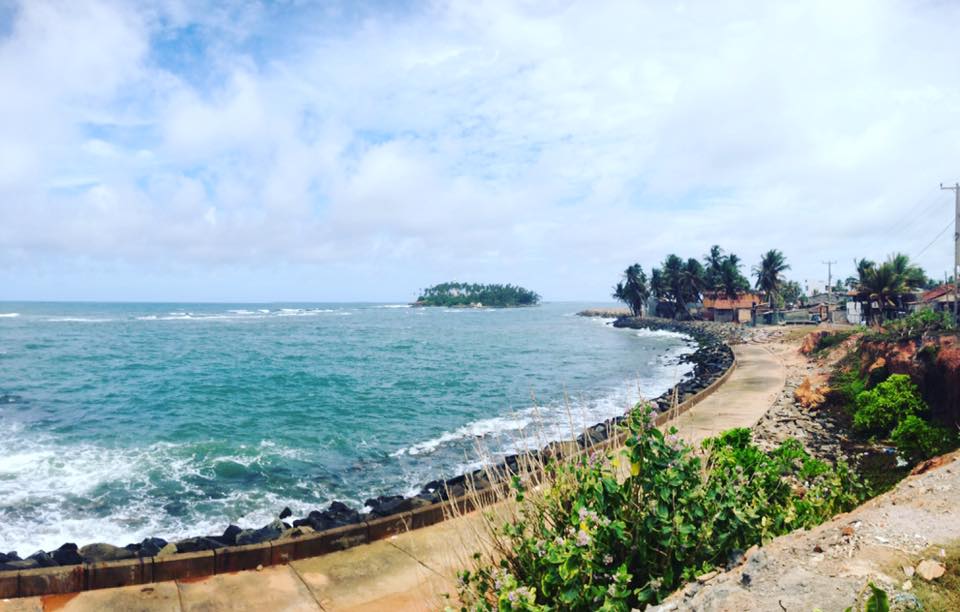 Any time there is a long weekend, the denizens of Colombo tend to migrate south like a bunch of fun-starved storks. It’s the shortest distance to decent-ish beaches, plenty of good hotels, and a nightlife that, if not happening, has at least happened. The stretch of coast from Bentota onwards has plenty of nice places to relax by the sea, but if you are tired of sipping cocktails on the beach, there are a few things you can do around the area that does not include getting sand in your Speedos.

Just north of Bentota, off the coast of Beruwala, is a small speck of land called Barberyn Island. Not Barbarian Island, which is what it sounds like if you ask for directions. Once in Beruwala, you need to stick to the western most road, which is called Maradana Road. We just drove along till we saw the island and the lighthouse right opposite. The area is actually a small fishing village, and there is no real boat service as such to get you to the island, but when we spoke to the fishermen there, they offered to take us. They do this regularly for visitors coming to see the island. It seemed a bit dodgy because there were no set prices or any way for us to compare rates. But there were older Muslim gentlemen there who seemed to own the boats, and who organised everything for us, so the process was not terrible. The boats usually cost Rs. 5,000 for a group of people, but since the ride is really short and it was just two of us, we got the price down to a fifth. The boat dropped us off on the island and left us with instructions to call them when we were ready to leave. The island is pretty small, about 8 acres with a few buildings right in the middle around the lighthouse. The lighthouse is a 112 feet of granite, and was built in 1889. The caretaker waxed lyrical about the rotating beam apparatus that was added to the lighthouse, showed us around the buildings, gave us a bit of history, and then left us to our own devices. There was one aggressive chap from the village who kept trying to be our guide, but we just did our own thing and he left for more lucrative opportunities, a.k.a., whiter skin.

There’s not much more to do at the island, so we called the boat back to pick us up. The older gentlemen back at the boats told us it was better to come earlier in the morning, which is when most people visit the island. We were also invited to the evening fish market and to a gem shop nearby. We passed on those.

In the opposite direction is another fun place to visit. Madu Ganga is a shallow body of water about 19 km south of Bentota. You drive down the main road till you hit Balapitya, and then take a left towards Madu Ganga. It’s a bit mainstream, with a lot of people taking tours around the lake daily, but the experience is worth it. There are plenty of boat services offering tours around the lake, and each is pretty much like the other so you can take your pick. It’s easier to approach one of the services that are right up against the lake, however.

You could rent out a boat just for your group, or share with others to reduce costs. The boat might cost you Rs. 2,500 for the tour. The boat takes you around several islands on the lake itself. One of the islands is full of cinnamon trees, and has a small industry going, with a few of the ladies doing demonstrations for the visitors arriving on the island. The lady who sat down in front of us with a branch in one hand and a knife in the other looked particularly piqued with the world, sort of like Democrats post election day. She stripped the bark off the cinnamon branch with a few easy strokes and dumped it on a side. She then used the point of the knife to peel the next layer, which came off like a sheath. These are then hung to dry on twine strung under the roof of the hut. It was fascinating. The discarded first layer of bark is usually reused as fertiliser while the rest of the branch is made into toothpicks. She showed us a tray of cinnamon oils, sticks, and powder which we could buy if we wanted to. We did buy the powder ‒ it was really good stuff and cheap  ‒ at which point her glacial attitude towards us thawed, sort of like the polar ice caps for global warming. The boat then took us past five cent (satha paha) island, which is a tiny island three paces across with a small structure on it.

Our next stop was the Kothduwa temple, located on another island on the lake. The temple is believed to have once sheltered the sacred relic of the tooth of the Buddha. It was a beautiful temple, and had many pilgrims arriving in boats for services while we were there. They seemed very tolerant of visitors, which was nice. At the very centre of the lake is the largest island called Madhuwa. The island is big enough to have several hundred people living on it, its own post office, and grama seva. It’s connected to the mainland by a long narrow bridge that’s just about wide enough for a motorbike to pass. Anything larger has to get to the island by boat.

Our favourite part of the tour was the visit to the fish farm. A series of enclosed spaces in the river held dozens of ornamental fish of the pond variety. They varied in size from the length of a finger to longer than a forearm. For Rs. 100 you get to dip your feet in the water and have the fish nibble on them. It was the most squeal-inducing thing ever. The money mostly goes towards the fish food which they toss at your feet to bait (heh) the fish into attacking your toes. They were pretty aggressive, so we skipped the bigger ones. No point losing a toe just for an Instagram photo op.

There’s plenty of stuff in the south that doesn’t involve beaches if you do a bit of searching. But the lighthouse and Madu Ganga are fun just for the novel experience of it. Both places are very much part of local culture, with life going on as usual around the tourists passing by, so there’s none of the disconnect you’d normally experience around the bigger tourist spots. They also don’t take up too much of your time, and so are good for a quick detour from your usual plans.