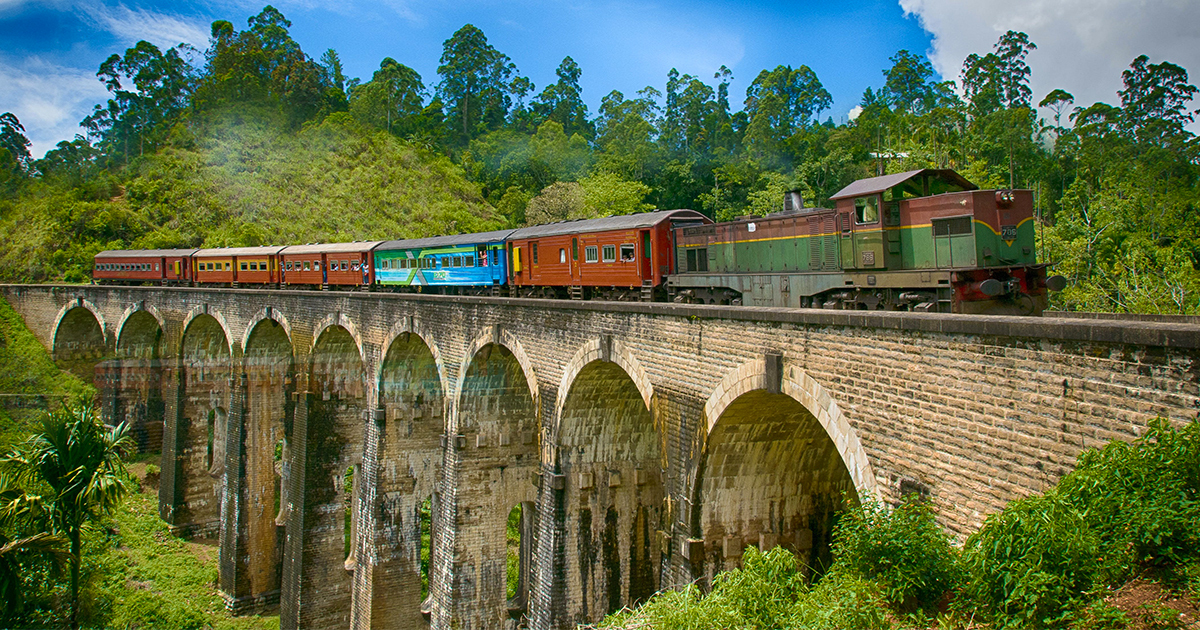 Sri Lanka’s impressive railway network spans over 1,500 kilometres, across which more than 1,180 bridges are distributed. Originally established by the British to transport produce from the hill country, the railways are now a popular way to see the island’s diverse landscapes, with the Main Line from Colombo to Badulla considered one of the most scenic railway lines in the world.

It took well over 70 years for the British to complete the ‘Main Line’, as they called the mountain railway,  each stage of the line presenting enormous challenges in engineering and construction. Records speak of a few thousand workers brought in from India to form the original workforce, later supplemented by Sri Lankans as the line made its way to hinterlands. Death and disease took a heavy toll on the workers, who had to toil in an extremely challenging landscape, armed only with hand tools and winches. “Every sleeper laid in Maha Oya cost a life,” states one record in David Hyatt’s Railways of Sri Lanka, referring to the diseases that plagued those working on the railway line along the plains to Polgahawela.

While the ingenious efforts of the workers led by innovative British engineering made the Main Line a reality well over a century ago, it is the equally challenging ongoing efforts by Sri Lanka Railways that keep the line safe. ‘Linesmen’ patrol every inch of the line in the mountains, inspecting every detail, particularly the bridges and tunnels — a crucial task in the extremely treacherous terrain.

The Main Line is serviced by different types of bridge architecture, namely the iron bridges belonging to open deck, semi-truss, and truss categories. The majority of bridges along the Main Line are open deck bridges, according to Dr P. B. Ranjith Dissanayake, an authority on riveted iron bridges. Truss bridges, which are covered from all sides with steel frames, were used in the bridges that span the rivers Kelani, Maha Oya and Mahaweli, while “semi-truss bridges are seen only in a few locations,”, such as the ‘60-foot bridge’ in Kotagala. “The most common type is the open deck bridge, which helps the line to make the curve, even on the deck of the bridge, along with the task of keeping to a gradient,” he explained.

Dr Dissanayake, a senior professor at the Faculty of Engineering, University of Peradeniya, has conducted extensive research into the aspect of fatigue encountered by Sri Lanka’s old, riveted railway bridges.” Along with other researchers, he has developed a structural health monitoring formula for measuring the fatigue-induced challenges on iron bridges of the Sri Lanka Railways. His research has contributed immensely to the timely maintenance and retrofits of riveted bridges by dedicated work teams keeping constant watch on the century-old bridges along the Main Line. “With due maintenance, these iconic bridges could continue to function without the need for complete replacement at huge cost,” he said. “With proper care, virtually all of these iron bridges can be kept in optimum conditions for decades to come.

In addition, Sri Lanka Railways has its own protocols to ensure the safety of its iron bridges in the mountains; Senior retired driver Jayampathi Madigasekera, who has decades of experience in railroading along the Main Line, explained that it is standard practice to use two locomotives in front of the train to bring the Night Mail train down to Badulla from the heights of Pattipola because the steep descent of 1 foot per every 45 feet down to Badulla requires substantial load bearing and traction at the head of the train, which has 13 cabins – one of the longest trains that run in Sri Lanka. Railway regulations prevent more than two locomotives running together, attached simultaneously on the same line, to prevent excessive loads on the bridges. Besides, every bridge is fixed with ‘check rails’ that are attached to the deck to minimise damage in case of derailment and trains are expected to maintain speeds of around 20 kmph over the bridges between Nawalapitiya and Badulla. All these measures ensure the safety of the iron bridges on the mountains.

When journeying by train along the Main Line, the scenic twin bridge at Maha Oya is one that must not be missed. Set in the beautiful curve of the flowing river and surrounded by the small, evergreen rainforest of Koskale Reservation, the twin truss bridge spanning 380 feet of the river is a treat to see, with the tropical surroundings adding to the experience. The Maha Oya bridge stands about 500 metres beyond Yattalgoda station, which is located at the end of a long reverse curve of the line amid the scenic countryside.

Next, beyond Nawalapitiya, once the train has passed the little Inguru Oya station towards Hatton, there stands a magical little bridge over a steep gorge sandwiched between two tunnels. Unless travellers stay alert to the rapid change of scenery, they are certain to miss out on many of the stunning sights, so the trick is to be on the lookout, eyes downward on the right side as soon as the train reaches the first tunnel. One is treated to the sight of a similar bridge over a gorge immediately before reaching the twin tunnels as well. In the narrow span of a minute and a half, one of the most beautiful experiences in the entire journey simply flashes past one’s eyes. These wrought iron bridges, built back in 1885, had been retrofitted with mild steel in 1950 as the records state, possibly due to heavy mist and ever present water vapor from the gushing waters of the gorges, particularly during the monsoon months.

As the train meanders up the sides of the Great Western mountain range beyond Talawakele station, and before it reaches the famous Soda Bottle Curve, one will witness an exquisitely constructed bridge among the sprawling gardens of tea. This is one of the most scenic bridges in the tea country setting between Watawala and Hatton.

Moving along the line, just before it reaches Nanuoya station, the train passes over the popular ‘Waterfall  Bridges’— three of them, spanning one beautiful fall after the other. As the train curves over these three bridges, the viewer is treated to a series of sights giving possibly the best of ‘train-over-waterfall’ experiences in Sri Lanka. The stretch of waterfall bridges may include three more during the rainy season, when the steel bridges closer to Radella station too are endowed with gushing waters beneath them.

Two forest bridges deep inside the Horton Plains are hidden treasures. As the train ascends through the montane forest, about three kilometres before Ambewela station, with the Elgin falls visible in the distance on the left,  a long, dark bridge can be seen, surrounded by thick foliage. “This could arguably be the highest bridge in Sri Lanka, in terms of altitude, which would be above 6,000 feet at this point,” Adil Reeza, an avid collector of railway literature told Roar Media. “The other bridge is even more spectacular, set high above the forested ravine, located about three kilometres after the bridge passes the famous Tunnel 18 — the first tunnel after summit level at Pattipola,” he said.

Meanwhile, Kital Ella Bridge, with its spectacular view of the countryside, is one worth a visit on foot. An essential part of the itinerary for a visitor to Ella, this bridge is constructed way above the impressive waterfall that turns into a roaring cascade during the rainy season. The bridge itself is something of a wonder, curving towards the deep valley below, with the waterfall hidden from view.

There’s little need to go into detail about the Demodara Bridge (viaduct, in fact), which has long since been recognised as amongst the most famous of landmarks in Sri Lanka. This one rushes into view as the train emerges from the first tunnel after Ella station. At the time of its construction in 1913, it was considered the longest viaduct in the east. Built under the supervision of Harold Cuthbert Marwood, the engineer in charge of the construction, the workforce had to make do with one concrete mixer, a crane, and two derricks in their effort to complete the work that took less than two years.

Immediately after the famed Demodara loop, as the train descends into the mountain chain along which it weaves its way to Badulla, lies the famed Black Bridge, with its highly elegant design blending beautifully into the secluded location where it connects the two mountain ranges. Of the deck bridges that span countless ravines in the mountains, the Black Bridge is arguably the finest in design, due to its aesthetically pleasing appearance.

Uduwara Bridge that meets the eye a little after the train passes the station is the last of the iconic bridges along the line to Badulla. Built above the valley, about nine stories high from the valley floor, this majestic structure that spans a length of over 330 feet may have been the tallest structure in iron and stone in Sri Lanka at the time of construction, according to Reeza.

Mountain railway bridges along Sri Lanka’s Main Line are spectacular in their own right, due in part to the vantage they provide to view the majestic natural beauty visible from high above the ravines. The treasured moments, though fleeting, where the traveller is suspended between the gushing stream below and the sky above is the gift one is rewarded with for any travails endured during the long journey to and from the mountains.