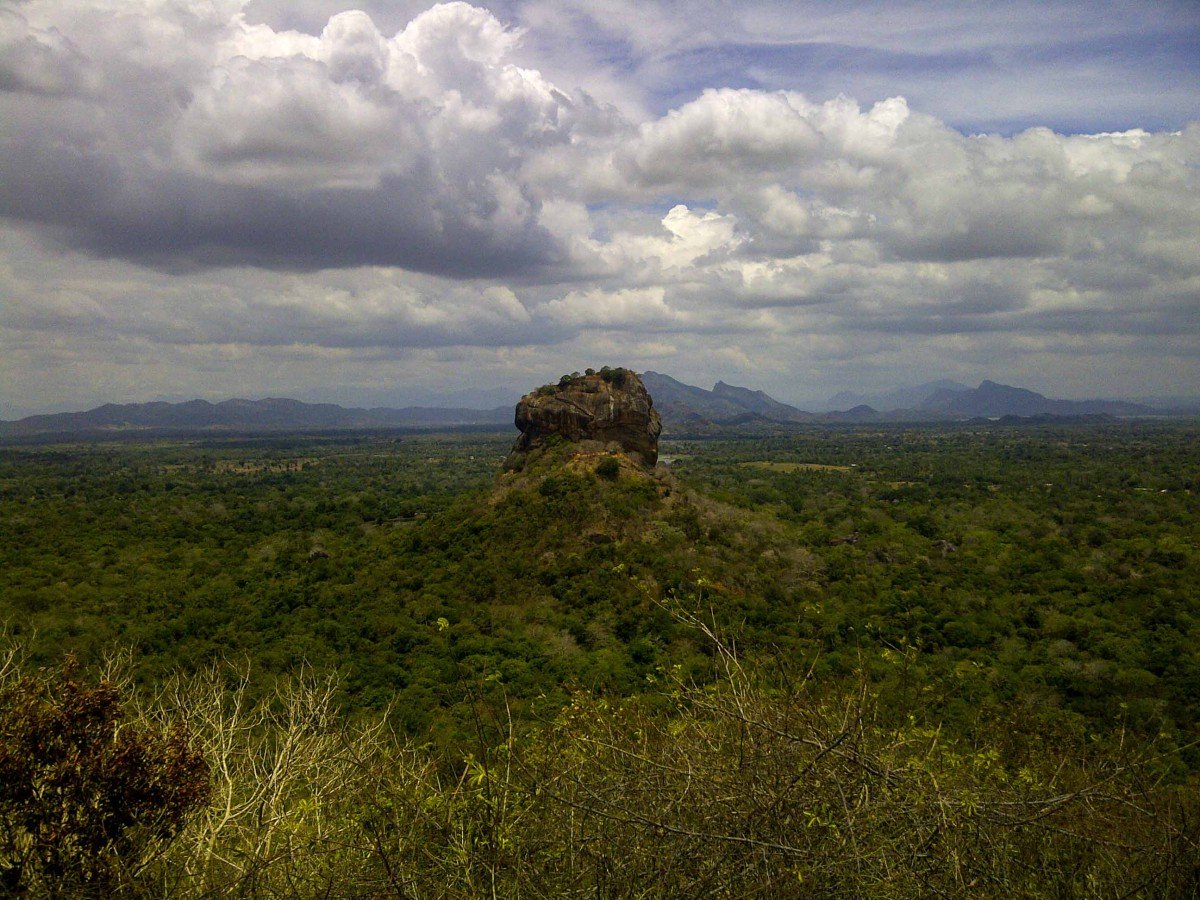 When it comes to promoting Sri Lanka, there are a few predictable photos that always make the cut. Tea pluckers in the plantations. A coconut tree stretching over a beach. A cloud encircling Adam’s Peak. But perhaps most famously, an aerial view of Sigiriya emerging out of the surrounding greenery. It comes as no wonder then, that this ancient fortress is Sri Lanka’s most visited tourist destination. And yet, despite its popularity, most travellers forget the fantastic view of the rock that brought them there in the first place.

In an age where drones are heavily regulated, domestic flights are not widely affordable, and Instagram photos reign supreme, catching a cloud encircling Adam’s Peak may be a stretch. But a semi-aerial view of Sigiriya is not out of reach—thanks to the neighbour that lives in its shadow: Pidurangala. As Sri Lanka’s most popular tourist attraction, Sigiriya is naturally crowded and travellers often submit to a slow-moving horde on their ascent. In 2016 alone, the ancient fortress drew over 500,000 visitors—ahead of destinations such as Pinnawala, Yala, and Polonnaruwa. One of the bottlenecks includes the narrow staircase to the summit. At this landing, most cameras are pointed towards the Lion’s Paws. Without realising it, travellers miss out on a majestic view of Pidurangala rising up behind them. Located a mere 2 kilometres away, Pidurangala is the slightly shorter, and much less crowded neighbour of Sigiriya. A short walk or tuk-tuk ride takes travellers along a road that features an ancient brick stupa, among various other ancient ruins that were once part of the larger monastic complex of Pidurangala. Before the ruins, a cave temple constructed in the 1930s sits at the foot of the rock that rises 342 metres above sea level. The climb begins on sets of stone steps, giving any visitor the impression that Pidurangala is an easy mountain to scale. And that rings true until the larger boulders closer to the summit demand some clambering. No formal entrance fee seems to be imposed on Sri Lankan travellers, however, foreign tourists are expected to pay Rs. 500—a bargain when compared to the $30 for Sigiriya. An alternative route from the cave temple leads to a mezzanine level of sorts, where a recently built Buddha statue sits upon a tranquil landing with a view over the immediate landscape. As with the several caves found upon Pidurangala, this area is likely used by monks to meditate—a practice dating back to the arrival of King Kasyapa at Sigiriya in the 5th Century AD. Prior to constructing his palace at Sigiriya, Kasyapa relocated its resident monks to Pidurangala where he built a quiet mountain monastery amidst a dense forest. Here, the stairs begin to disappear and irregular footholds are used for the ascent. Noting that the famed frescoes of Sigiriya all face north, Sri Lanka’s first Archaeological Commissioner, H.C.P. Bell is also said to have suggested that this may have portrayed a procession towards the monastery at Pidurangala. Although virtually empty in comparison to Sigiriya, Pidurangala does not escape the notorious issue of littering that comes with any level of visitation. Various waste items can be seen thrown into the surrounding forests, where they have been neglected despite the emergence of Pidurangala as a tourist destination. Exiting the forest, a landing conveniently emerges for visitors to catch their breath before the final approach to the summit. Foliage that obstructs a view of the greenery below provides shade for meditating spaces, divided by vandalised brickwork beneath an outcrop of the mountain. The landing also hosts a small algae-filled pond, and a 7th-century rock inscription guarded by a metal fence. According to the incumbent monks, the ancient script indicates a donation of fields and gold, from which Pidurangala derives its name through the Sinhala words of ‘pidu’ (offering), ‘ran’ (gold) and ‘goda’ (heap). In one of three spaces divided by the brickwork lies a large reclining Buddha statue that measures nearly 50 feet long. Said to have once been Asia’s largest Buddha statue constructed in brick, clay and limestone, it was later defaced by treasure hunters in the 20th century. The upper portion of this landmark at Pidurangala has since been restored. The final approach to the top of Pidurangala is the hardest part of the climb. Demanding the use of all fours at certain points, a short clamber from the landing leads to large boulders and uneven surfaces before a final squeeze through a snug opening to the summit. After climbing for roughly 20 to 30 minutes, the lower (and more popular) portion of the summit extends out of the rock as a ledge and gives travellers not only the same view from Sigiriya, but a stunning view with Sigiriya in it. This view of the fortress is second only to one from the sky, and also arguably one of the best views Sri Lanka has to offer. With the growing popularity of Pidurangala, comes the growing popularity of the ledge facing Sigiriya as an Instagram location. In recent times, numerous users seem to have settled on a standard ‘Pidurangala aesthetic’, which features their backs to the camera and their faces towards the Lion’s Paws. A quick scramble from the ledge, however, leads to the true summit of Pidurangala, and a wide, empty expanse with unobstructed vistas of the Central and North Central Provinces. Unlike its fortified neighbour, the rocky surface atop Pidurangala is mostly at a single elevation. This allows climbers to relish open views of the landscape from all sides, without any extra movement to avoid structural hindrances. In sight are panoramas of the surrounding jungles, lakes, fields and mountain ranges. On a clear day, the Central Highlands may also be visible. Small patches of vegetation are the only spots that colour the otherwise empty surface of Pidurangala’s summit. A few years ago, groups of travellers would find shade for a picnic break between the cacti and thistles. Now, this area is roped off, and serves only as an indicator of the wind strength at this height.

No doubt, Sigiriya is a must-do for any traveller in Sri Lanka. But fewer crowds, cheaper entry fees, and a shorter climb for a similar (if not, better) view, makes Pidurangala a truly exciting alternative for visitors to this area. Plus, the sight of Sigiriya from Pidurangala’s infamous ledge bears a striking resemblance to the view that draws travellers to Sigiriya in the first place.

Pidurangala is located approximately 180km from Colombo, and can be easily accessed from the nearby towns of Dambulla, Habarana, and Sigiriya. On public transport, the fastest option is to take any bus from Colombo that passes through Dambulla or Habarana (e.g. No. 15 to Anuradhapura, No. 48 to Kaduruwela, or No. 49 to Trincomalee), and then hop into a tuk-tuk to Pidurangala from there.

A tuk-tuk can also be hailed from the foot of Sigiriya. But if the heat isn’t an issue, the 2-kilometre journey makes for a lovely walk through the outskirts of an ancient kingdom. The best time to visit is early morning or late afternoon, reaching the summit for a magical view by sunrise or sunset. It is also generally possible to scale both Sigiriya and Pidurangala in a single day. Depending on fitness levels, a comfortable hike up and down the latter rock should take just over an hour.