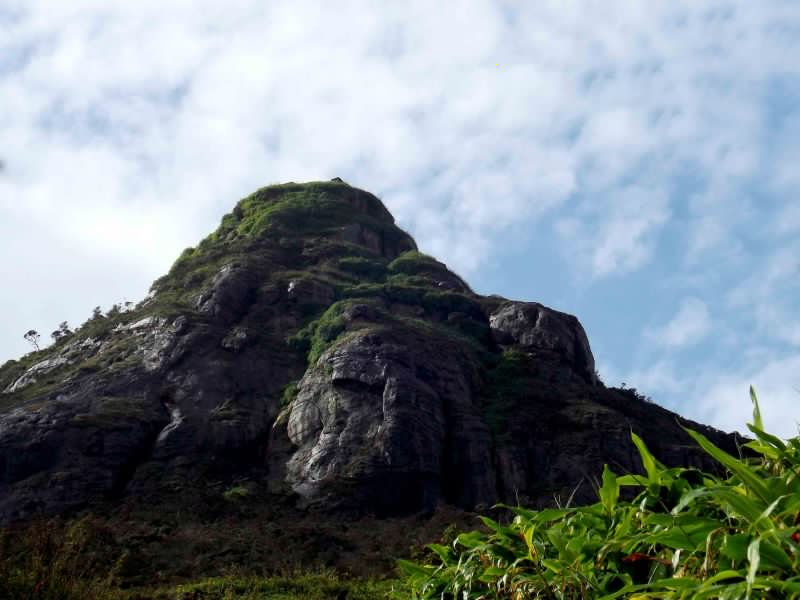 Adam’s Peak, or Sri Pada, is undoubtedly one of the most famous mountains in Sri Lanka. Through the ages, it has commanded the respect and devotion of people of different faiths and racial groups. It is the belief among the four major religions in the country that the famed footprint at the peak of the mountain is that of Lord Buddha, Lord Shiva, and the first man Adam.

The mountain also features in popular historical texts and legends. According to folklore, Adam’s Peak is where King Ravana hid Queen Sita after he had abducted her from India. Even visitors such as the merchant Sulaiman from Arabia, the Moroccan explorer Ibn Batuta, and the Chinese monk Fa-Hien have visited and made mention of this revered mountain in their writings.

While the famed footprint and the shrine around it are the main reasons to visit the mountain, it certainly aren’t the only attractions.  Apart from being home to flora and fauna, there are several other places of interest which can be found along the mountain, such as the Japanese Peace Pagoda, the Bhagava cave, the ruins of the Pathiraja Pirivena, and the stone steps of Dharmaraja gala, which do not always receive the notice and attention of tourists and pilgrims.

The four paths to Sri Pada The pilgrims usually visit Adam’s Peak between the months of December and May. Image courtesy npaulis.blogspot.com

Throughout history, pilgrims have made their way to the holy mountain of Adam’s Peak  via four different routes: the Hatton-Talanthiya road, the Kuruwita-Erattha road, the Ratnapura-Palabaddala road, and the Deraniyagala-Maliboda road.

Only the Hatton and Ratnapura roads, however, lead right up to the peak of the mountain. Both the Kuruwita and Deraniyagala route connect with the aforementioned roads at specific places. Out of all these roads, the Hatton road is most preferred by tourists and pilgrims alike, due to its shorter distance. The Ratnapura Road, however, despite being 3kms longer, has more scenic views to offer. This makara thorana was built to commemorate the first time the mountain was illuminated with electric lights. Image courtesy 2bp.blogspot.com

While trekking up Adam’s Peak via the Hatton-Talanthiya road, a splendid archway known as Makara Thorana in Sinhalese, can be witnessed at the foot of the mountain.

This archway is actually a memorial. It was built in to commemorate the day when Adam’s Peak was first illuminated (March 4, 1950) with electricity generated by the Laxapana power station, the first hydroelectric power station in Sri Lanka.

The peace pagoda of Gangula thenna This Peace Pagoda is one of five that were built in Sri Lanka with the help of Japanese funds. Image courtesy rentacar-srilanka.com

After passing the makara thorana, one will come across the Japanese sama dagaba (peace pagoda) and accompanying viharaya  known as Gangulathenna. It was built by the famous Japanese Buddhist monk Ven Nichi Fuji in 1976 and is one of the one of the  peace pagodas built with Japanese aid. The area of Gangula thenna also has a large ambalama, a structure which offered shelter in the days of yore to weary pilgrims. Seetha Gangula is a small waterfall of extremely cold water that flows from the top of Adam’s Peak. Image courtesy panoramio.com

Seetha Gangula (icy waterfall) is the next stop after  Gangulathenna, , aptly named because of the icy cold water which flows from the top of Adam’s peak. Pilgrims and visitors stop here to refresh themselves, in preparation for the rest of the strenuous climb up the mountain. Lord Buddha, while journeying up the slopes of Adam’s Peak, is said to have paused at Geththam paana to attend to a tear on his robes.Image courtesy npaulis.blogspot.com

Also known as Indikatu Paana, this place is located close to the steep face of rock called Mahagiri Dhambaya, which makes up the last leg of the climb to the summit of Adam’s Peak. According to legend, Geththam Paana is the place where Lord Buddha is said to have paused on his journey up the slopes of Adam’s Peak, to attend to a tear on his robes. It is a tradition for pilgrims to stick needles with thread onto a tree or post near this area, in remembrance of the Lord Buddha. Mahagiri Dhambaya is the steepest area of the mountain, which makes it a tricky climb. Image courtesy i.stacks.imagur.com

The climb up the Mahagiri Dhambaya is rather arduous because of the steep incline. Fortunately, Adam’s Peak now has steps carved along this dangerous area of rock. Visitors in olden days were not so lucky. To summit Adam’s Peak, they had to use ropes to climb across the Mahagiri Dhambaya. Some people even fell to their deaths while climbing over this steep face of rock. 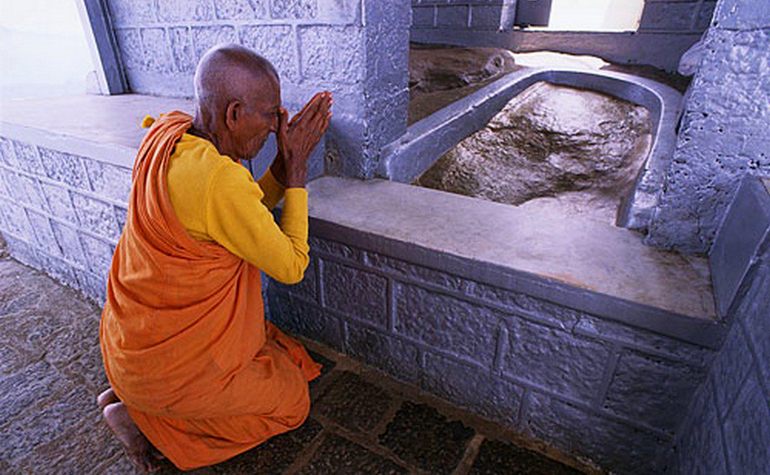 It is said that Lord Buddha may have rested in this cave while on his way to the summit. Image courtesy amazinglanka.com

The Bhagava cave, too, is located close to the summit of the mountain, roughly about 100 feet below it. This man-made cave was once hidden by vegetation, but was later cleared and restored for tourist purposes. There are two inscriptions here in the Bhagava cave: one is an Arabic inscription and the other is in Sanskrit, which speaks about King Keerthi Sri Nissanka’s visit to Adam’s Peak in the 12th century.

Adam’s Peak via the City of Gems 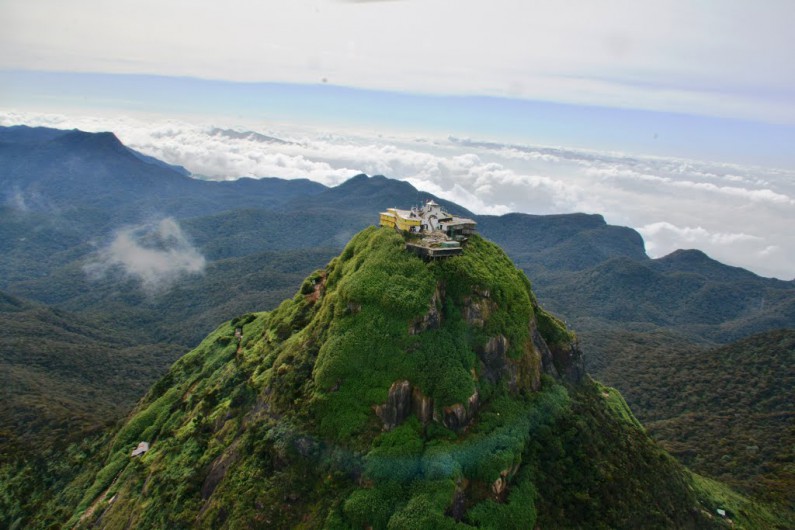 The shrine perched on top of the summit. Image courtesy  threegems.org

The distance to Adam’s Peak from Ratnapura, the esteemed city of gems, is 23kms. One can travel from Ratnapura to Palabaddala by vehicle, and from Palabaddala onwards pilgrims usually travel by foot. According to folklore, the village of Palabaddala was initially given the name Palabuthdola because villagers provided King Sri Rajasinghe with a meal of green leaves (pala) with rice (buth) while he was on journeying to Adam’s Peak. As time went on, the name of this village changed from Palabuthdola to Palabaddala.

This route, despite its length, is quite picturesque, with the path going through a mountainous area dotted with villages. The starting point of the Kalu ganga can also be spotted along this route. View of Adam’s Peak from the village of Palabaddala. Image courtesy panoramio.com

At the start of this pathway lies the Keerthi Sri Rajasinghe Viharaya. It is believed that King Keerthi Sri Rajasinghe visited this temple on his way to the peak, hence the name. The steps which lead the top of the mountain begin right past the temple. On the right, at the foot of these steps, was where the Prathiraja Pirivena once stood. This temple was not only a place of worship during the era of the Dambadeniya Kingdom, but was also a prestigious educational institution. 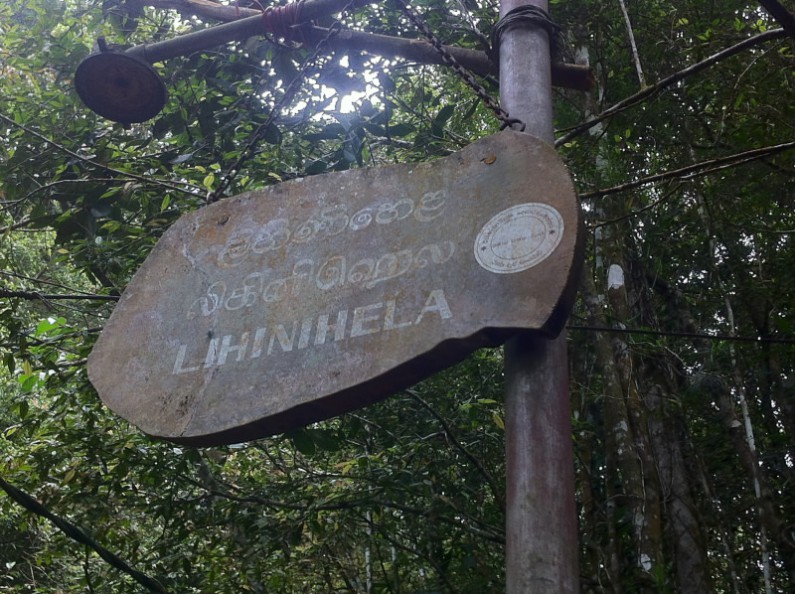 Lihini hela is a steep rock wall on the peak of the mountain.  Image courtesy hikershavensl.wordpress.com

After passing breathtaking waterfalls, one will come across the Lihini hela ambalama which is built on a small plateau on the mountain. From the ambalama, a steep wall of rock can be spotted in the distance. This is the Lihini hela, and many travellers engage in the playful custom of shouting the name ‘Lihini akke’ in order to hear the echo of their voice. According to folklore, Lihini akka was a young woman who tragically threw herself off the mountain to her death. 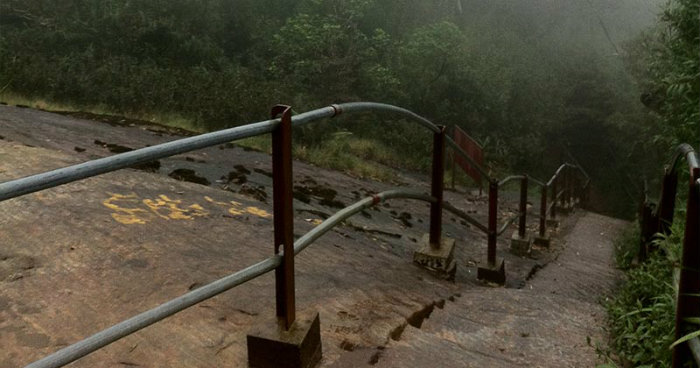 This area of the mountain is rocky, which proved difficult for travellers and pilgrims. Ancient stone masons solved this problem by carving a hundred steps into the stone. According to a stone inscription dating back to the Kotte era, a hermit by the named Bamunugama Dharmaraja commissioned the steps to be hewn, hence the name Dharmaraja Gala.

According to legend, Lord Buddha was presented with a haramitiya (wooden walking stick) at this location, which was afterwards called Haramitipaana. It is here that the Erattha-Kuruwita route meets the Ratnapura-Palabaddala road. Here, too, a large ambalama has been built for the weary traveller to rest. This spot also offers a clear view of the mountain. The Ahala kanuwa is a small stone pillar that used to stand on the side of the Ratnapura-Palabaddala road. Image courtesy sirilakasarisara.blogspot.com

The Ahala kanuwa is a stone pillar, about two-feet tall, located on the side of the pathway, which is now broken in two. Why the pillar is named Ahala kanuwa is a mystery. The Mahagiri dhambaya begins from the Ratnapura side near this pillar. The remains of the ropes which were used by pilgrims in the olden days to climb up this steep face of rock can be spotted from here.

These lesser known places of interest add their own appeal to Adam’s Peak, contributing to  the rich history of the island. How many have you visited?