While Colombo is in the midst of creating a new port city (under the auspices of the Sri Lankan Ports Authority and China), Trincomalee is way ahead by centuries. At about a seven hour ride from Colombo, Trinco is widely recognised as one of the world’s best natural harbours—the Ports Authority claims it to be the second best in the world.

The town is popular for its clear seas, remote beaches, and stunning sunrise views; with new resorts and hotels rapidly mushrooming up along the seafront to accommodate tourists now.

Here, we’ve listed a few places you can visit within a day, with a lengthy lunch break in between. Exploring during noon isn’t advisable given the heat, so we recommend checking the hot water wells in the morning, and then heading to the city centre where there are museums, forts, and historic places of worship in the evening.

Fun fact:  there are a lot of deer wandering around, some of them quite tame. Poaching is illegal, and residents of the area believe that killing deer brings bad luck—so you find them wandering all around the town centre, with herds even occupying the central bus station. While this seems quaint, it has created a few problems: there’s not enough drinking water, and they scavenge through bins, often eating through polythene. There are signboards requesting people to dispose garbage and polythene properly, and in a way where the deer would not get to it. Feeding them are discouraged as well—however tempting it may seem.

Wildlife aside, there are quite a few other things of interest in the area. 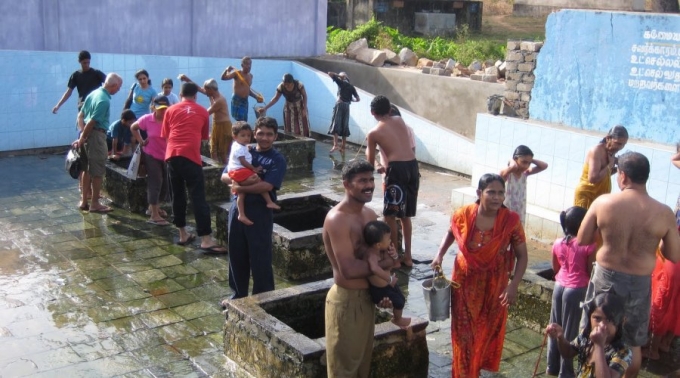 Like many places in the country that is of either immense beauty or awe, the origins of the hot water springs here are also linked to King Ravana. According to the government’s signboard close by, the king struck the ground with his sword several times—and the hot water which gushed forth from there is what we are blessed with even today.

The complex is about a half hour’s drive away from the Trincomalee town, with plenty of signboards giving directions along the way.

Maintained by the Trincomalee Pradeshiya Sabha, the wells are often crowded with visitors who believe the hot water has healing properties. The temperature of the seven springs vary slightly from each other; with the wells themselves being quite shallow—about four feet deep at the most.

While people are allowed to use the water to wash their feet or even bathe, soap is not allowed within the premises. So you basically get a hot (or warm) water bath from a (sometimes) bubbly spring. Don’t be fooled by the exterior—it’s home to a lot of interesting artefacts. Image credit wikipedia.org

Opened to the public in 2014, this museum used to be the official residence of Dutch Naval Commissioners. Featuring highlights of Sri Lanka’s maritime history, the museum includes torpedos, cannons, and other weapons used during the Second World War, and submarines and improvised mines used by the LTTE in more recent history.

The museum sits in the Dutch Bay, and is a short walk away from the Koneswaram beach. The entrance is deceptively narrow, and is a squeeze for larger vehicles to get through. Image credit wikipedia.org

What sets Fort Frederick apart from the Jaffna, Colombo, and Galle Forts?

The deer.Built in the 1600s by Sri Lanka’s first colonial invaders, the Portuguese called it the Fort of Triquillimale. A few years later, it was reconstructed by the Dutch, and then taken over by the British. When the British captured the fort, King George III rechristened it to Fort Frederick—and the name stuck.

The fort sits on Swami Rock, which is where the Koneswaram temple was before the Portuguese destroyed it and built the fort around it. The land is a miniscule peninsula of sorts with stunning views of both the land and sea visible from almost all angles.

As far as sunsets from the east coast goes, this is probably the most scenic place to watch it from. Many shrines and statues have been erected in the temple premises over the last decade alone. Image credit Aisha Nazim.

According to legend, the kovil was once a massive temple complex akin to those found in South India and was known as the Temple of a Thousand Pillars. Literary references in devotional hymns date back to 7 century AD, with the temple being patronised by the Chola and Pandyan kings as well.

When the Portuguese demolished the structure, its devotees did what they could to preserve the idols and other valuables—including burying them in both land and sea. Ruins of the temple were found underwater only in 1956, when Sir Arthur C. Clarke and photographer Mike Wilson discovered them while scuba diving. Restoration work at the temple was completed by 1963; but there have been newer and smaller shrines added around the complex over the last decade.

As of the last few years, devotees have taken to tying frames of tiny wooden cradles on trees and fences around the kovil as part of their prayers—it is believed that doing so would grant fertility and healthy children.

To the right of the temple complex, where the rocky cliffs end abruptly, is Ravana’s Abyss. This is also known as the Ravana Cut, and was apparently made by the king’s sword. Urban legend has it that it is a popular spot used by people to end their lives, hence the high safety railings attached to the rock now.

Getting to Trincomalee is straightforward: follow the A6 from Colombo-Kurunegala-Dambulla-Kantale-Trinco. Trains and buses from Colombo Fort are also available.