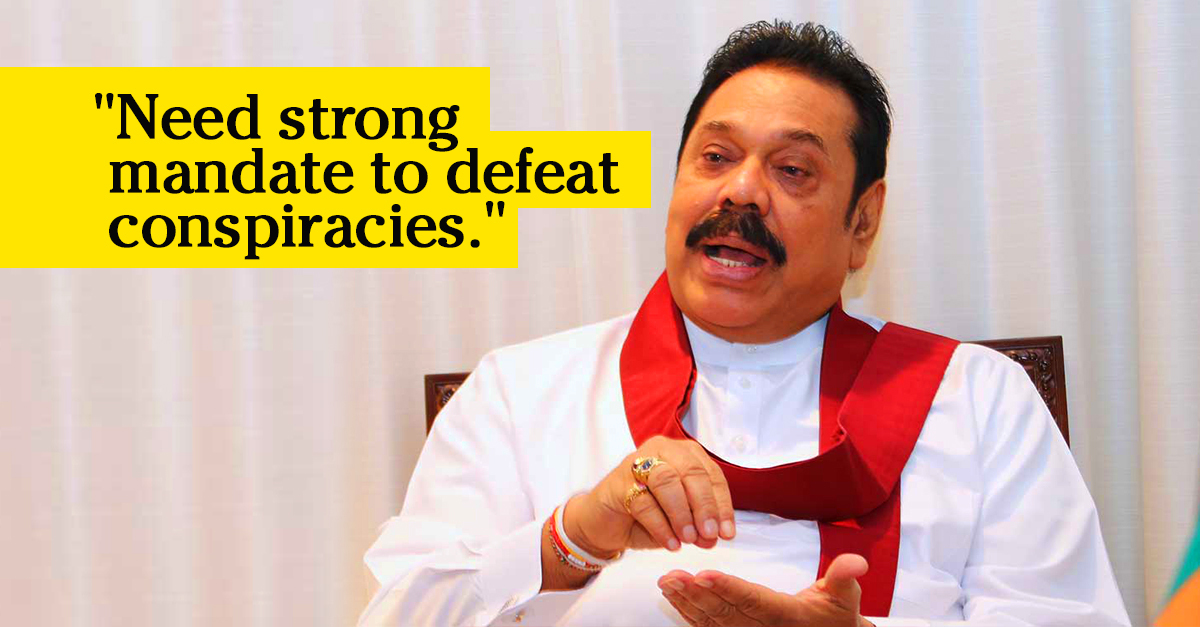 In a special statement issued yesterday (28), Prime Minister Mahinda Rajapaksa said local and foreign conspirators had not given up trying to divide the country.

“A socialist government assumed power in this country in 1970, but nobody said that it had been brought into power through Russian or Chinese intervention,” the Prime Minister said.

“Likewise, a capitalist government assumed power in 1977, but we never said that it had been brought into power through American or British intervention.”

He asserted, however, that foreign interference reached an extent never experienced before in this country at the 2015 presidential election.

“The situation that prevailed in this country following the assumption of power by the Yahapalana government in 2015 was akin to having been taken over by a hostile foreign invading force,” the Prime Minister said in his statement, listing out how the previous government had acted in a manner detrimental to the country.

The Prime Minister said all of this had been done to divide the country and introduce a new Constitution. “What they could not achieve through war, they tried to achieve through political manoeuvres,” he accused, saying that the conspirators had ultimately been unsuccessful only because the Presidential election was won by Gotabaya Rajapaksa.

“However domestic and foreign conspirators have not yet given up,” he said. “Everyone saw the drama that was orchestrated within days of the new President assuming office, alleging that a local employee of a Western embassy had been abducted and questioned.”

The Prime Minister also highlighted the great length to which the previous administration had gone to vilify the armed forces:

The former President alleged the intent behind all this was to persecute, demoralise and render ineffective the armed forces of Sri Lanka. “We need a very strong mandate at this election to conclusively defeat these conspiracies,” he said. “Even though the conspirators lost the presidential election, they have not given up their quest.”