Organisers of Sri Lanka’s first Asian Business Angel Forum (ABAF) recently held a preview event ahead of the main conference due to be held on October 11-12, 2017. Entitled “Tête-à-Tête With Startups In Sri Lanka”, the event took place on September 15, at the Kingsbury hotel, where a number of speakers addressed the pressing issues of an audience made up of mostly of young entrepreneurs.

The event featured e-commerce experts Mekin Maheshwari, Amit Banda and Ramesh Shah who spoke to over 50 startup founders in the interactive session. 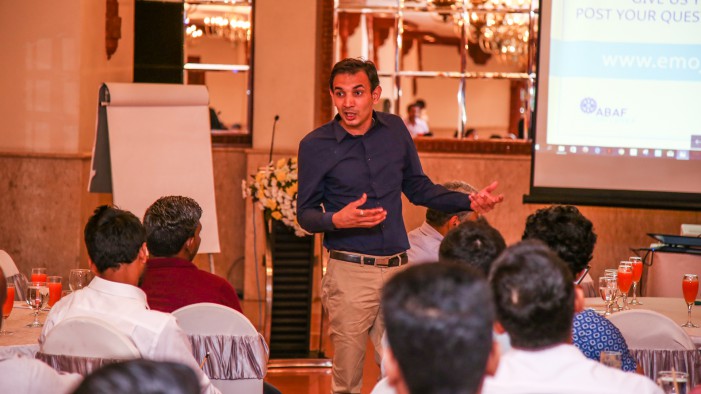 There was plenty of advice given at the workshop on areas as diverse as growing across borders, when and how to scale up companies, valuation and funding options, as well as tips on hiring staff, maintaining finances, the most advantageous transport and marketing alternatives, and fixing common mistakes that startups make.

Mr. Maheshwari, an early employee at Indian e-commerce giant Flipkart who climbed the ranks to become the company’s Chief People Officer before leaving the company in 2015, indicated that e-commerce companies were not always focused on creating assets, as was the case with more traditional companies. Rather their main goal was to grow customer volumes, with the company’s valuation and profitability only becoming a concern later on.

Mr. Banda, a former senior executive at both Reliance Communications and The Future Group, revealed that when Amazon was developing its Kindle online book reader, the team in charge of book sales at the company was worried that it could kill the market for paperbacks. But they eventually decided to go ahead, because otherwise, someone else would have beat them to market. This created a wholly new revenue stream for Amazon. Today, the reverse was coming into effect, where even though many people now bought books online, some e-commerce companies had identified omnichannel strategies to differentiate themselves and opened up brick and mortar stores to adapt to different channels and their customers’ behaviors.

Mr. Shah, the Founder of the RK Group, a US$ 450 million-in-revenues textiles and e-commerce firm, commented that no matter what strategy one took for entry into India, the role of China plays a big part. This was because China had fine-tuned shipping to a great degree, so much so that delivery of any small package from China to any part of India cost only INR 100 (approximately LKR 238.40). This meant that whoever wanted to compete in India had to always factor in this low shipping cost. Kicking off on October 11 at the Cinnamon Lakeside hotel, ABAF this year will also encompass the sixth edition of Venture Engine, Sri Lanka’s program for entrepreneurship acceleration and empowerment. As a result, Venture Engine participants, both past, and present, will have the once-in-a-lifetime opportunity to directly access, via ABAF, investments, expertise, and mentoring offered by well-respected individuals in the field of global finance.