Is social media broken? Blogger and Yamu Founder Indi Samarajiva seems to think so. Facebook maintains a monopoly on turning consumers into products, believes Indi, though he is hopeful that younger generations can fix these problems. These and other interesting ideas were shared at the fifth instalment of Dialog Axiata’s #ngage tech and social media meetup, held on Thursday (May 25) at Dialog HQ, Colombo, attended by a full house despite heavy rains that threatened to bring the roof down.

How Social Media is Broken 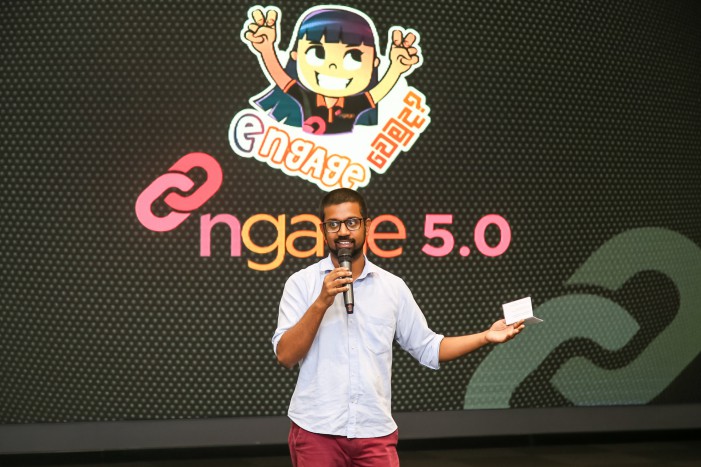 “Does the time you spend on social media make you happy?” was the question posed by Indi to the audience when he began his presentation. Answering his own question, Indi said that he stopped using social media altogether because it just didn’t make him happy. Worse still, Facebook was actually making him angry.

“I still have the account, but since I’ve stopped using it, I feel happier and I feel more connected to people,” he said.

One of the reasons social media is broken, according to Indi, is its overemphasis on engagement.

“The system as they developed it—which is built on a premise of quantity over quality—is one reason it’s broken. So if you have more likes, that was good. Even if it was a video of you killing yourself. If you get in a fight with someone, that drives a lot of attention on social media. Even in the early blogging days, it was good for business,” he said.

It’s not the kind of interaction that makes your life better, he added.

Humans are not wired to be in groups of more than 130. In hunter-gatherer societies, a group would split once it reached 130 or so members, because once that point was reached, it was socially unsustainable. On Facebook, where we have thousands of “friends,” we struggle to maintain relations with more people than we are actually capable of.

“We’re just not wired that way,” he said.

According to Indi, social media has also made it very easy to ruin one’s own life.

“With your phone, you can instantly ruin your life. By posting a naked picture, for example. Celebrities do make money over controversy, but they have professionals that help them manage that. But if you’re a regular person, that can give you a lot of pressure,” he said.

If the product is not getting money from you, you have to wonder if the owner of that product is in the business of selling you, the user, to other people.

Twitter and Facebook also profit off the regular social media antics of Donald Trump, what with his racist, sexist remarks often resulting in conversations that generate tweets and comments by the thousands. On a personal website, said Indi, a troll like Trump would just get banned. Twitter won’t ban @realDonaldTrump because his headline-grabbing presence is good for business.

“There’s a saying that if you’re not paying for a product, you are the product. That may not be what you want to be,” said Indi.

Another worrying aspect of social media is that, in most cases, users don’t own their data. Companies like Facebook, says Indi, love your data.

“These businesses also become monopolies. Ninety percent of social media is Facebook. Facebook doesn’t pay you for the good content you make. Facebook makes money, but they’re not going to pay you anything. Why would they? They have the monopoly.”

When Facebook first rolled around, Indi was a staunch advocate for it, asking everyone he knew to join it because, at the time, he believed it would be a good thing to connect to everyone you know.

“We didn’t ask questions at the beginning. At the start, we assumed that if everyone was connected, it would be better,” he said.

It’s not all bad, however, and there is still hope. Indi believes there are possibilities for young people to change things for the better.

“There are opportunities for young people to fix the problems on social media. I do think SM is messed up right now. I’m too old to fix it. But you guys can. And then it will be broken again, and the generation after you can fix those problems,” he said. Co-founder of Enable Lanka, Krystle Reid, is unsure whether social media is broken. For her, Facebook and Twitter have been useful tools when expanding her organisation that seeks to create a more inclusive society for disabled people.

Founded in 2014 with co-founder Janitha Rukmal, a visually impaired genius, Enable Lanka was founded with a vision that was common to both: Janitha, in his disability, and Krystle, due to her ethnicity—both strive for inclusivity.

“Inclusion was common for both of us. We both knew what it meant to be socially excluded. This is how Enable Lanka foundation came about,” said Krystle.

Enable Lanka has 12 core members—all of whom are self-described professionals so as to communicate their seriousness about making inclusion happen in every field.

“It’s just like women’s rights. It has to be included in everything we do,” said Krystle.

So does she believe social media is broken? She’s not entirely sure. But what she does know is that Facebook and Twitter helped her get the word out without having to spend any money.

“Social media is a necessary evil,” said Krystle, adding that she’s grateful to the different platforms because of the opportunities they have opened up for her organisation. 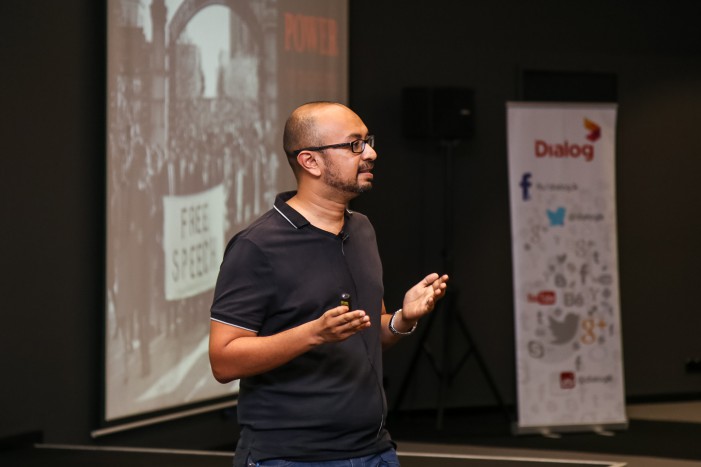 The last speaker at #ngage 5.0 was Executive Creative Director at Ashraff Associates, Aman Ashraff, who shared some wisdom on conducting oneself on social media with a keen awareness of one’s responsibility to the community.

“Always check your emotions before you post anything on social media,” said Aman, highlighting the importance of constructive engagement on platforms like Facebook, where a seemingly trivial faux pas can come back to haunt you when you least expect it. Screenshots, needless to say, are forever.

“You can’t undo what you posted, because even though you deleted it, someone took a screenshot,” said Aman.

According to Aman, digital is not a medium, but rather an infrastructure, and though technology fuels creativity, it will never replace it.

Touching on the somewhat controversial topic of social media influence, Aman said that relevance is key.

“Create relevance. Not awareness. And you will influence the world,” he said, adding that advertising is not about attention, suggesting that those in the profession do something worth their while with the influence of the brand.

What must also be noted, he said, is the value of context, when engaging in social media.

“Although content is king, context is emperor,” he said.

This month’s edition of #ngage was attended by a full house, with audience members taking to Twitter to live-tweet their thoughts on the speakers and the event overall. Follow the hashtag #ngage for more.

Dialog is Sri Lanka’s No.1 Brand on Facebook (1.9 million Fans), Twitter (290K followers) and Viber Public Chat (280K followers) making it the largest and most popular brand online. Dialog was awarded the Most Connected Brand by LMD, in a digital study conducted by TNS Lanka.