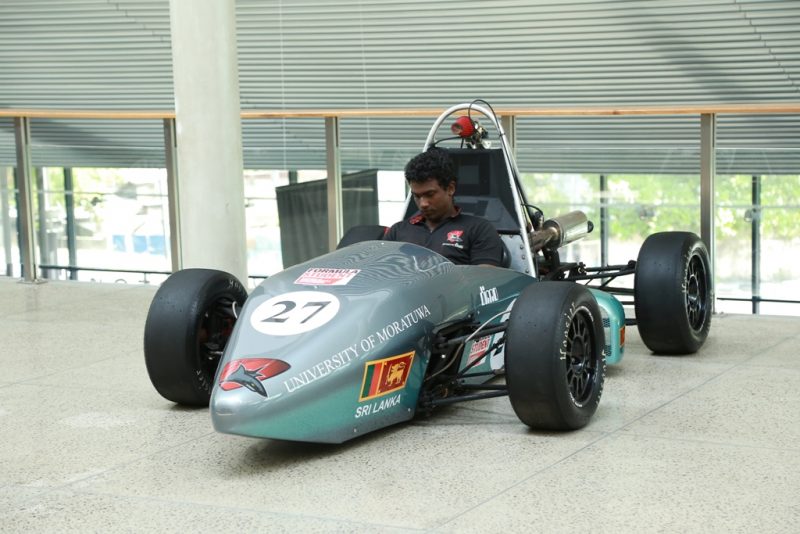 A car is pretty complex piece of machinery if you think about it, despite the fact that we are surrounded by them on a daily basis. A racing car gets even more complicated, and a Formula one doubly so. You’d need an ultra-lightweight chassis that’s also strong enough to handle the stress of a race, an engine powerful enough to push the car upwards of 300 kmph, materials that can withstand the high horsepower, seamless shift transmissions, aerodynamics, specialised tires, brakes, and custom fuel mixtures. Formula One cars are usually constructed by the racing teams themselves, who have access to the large amount of resources needed to construct such a specialised machine. Constructors like Ferrari, McLaren, and Red Bull have the necessary specialists, equipment, and money to build world-class Formula One racing car, which would cost upwards of 7 million dollars. Building a Formula car is not really the sort of project you can take on for a science fair.

This July, a group of undergraduates and staff advisors from the Department of Mechanical Engineering at the University of Moratuwa built a working Formula car and entered it in the Formula Student 2016 challenge held by the Institution of Mechanical Engineers at the Silverstone Circuit in the United Kingdom. While a Formula car does not have the same level of complexity as a Formula One car, it still requires a great deal of expertise and talent to build. 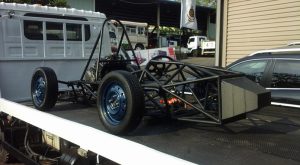 Not your average engineering project: students from the University of Moratuwa went all out and built a working Formula car – AND made it to an international competition. Image courtesy: teamsharkracing.lk/

This is quite a bit bigger than a science fair project, but the team (Team SHARK as they call themselves) managed to bag a few accolades, including “Dedication to Formula Student 2016”, ”Best Newcomer – Class 1” and “Best Individual Driver 2016”. The team placed 75th overall out of 107 placements, beating universities such as the University of Cambridge, University College London, Chitkara University Punjab, and the Warsaw University of Technology. The team also placed 36th at the Design Event, which means that not only did they build the car, they built a pretty good-looking one, too.

The challenge is a pretty rigorous one and the competition is stiff. There were over 130 universities from 30 countries who took part in it, which included over 3,000 students and 5,000 attendees. The competition was conducted in two categories: class 2 two focused on design, presentation, and costing, while the more difficult class 1 required the team to actually build a Formula car in addition to all the rest. This was the class that the University of Moratuwa students competed in. The car was judged on its cost, design, acceleration, skid pad, sprint times, endurance, and efficiency in the dynamic events. It is a pretty impressive feat to build a machine that passed all the testing stages the challenge had ‒ such as the scrutineering, tilt, brake, and noise tests. The team also had to go through the static events including design, cost and sustainability, and business presentations. 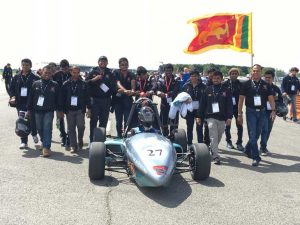 Of course, building a racing car is not cheap. The team started their project in 2014 with the intention of entering the competition, and initially funded it by selling tickets to lecturers and alumni. Beat that, Tesla! Later on, the 2008 batch of the University made a donation, which the team used to fabricate the chassis at an engineering workshop in Delkanda. The turning point came when DIMO came on as the sole sponsor, providing financial and technical assistance to the team, and promising to do so for the next five years. The sponsorship gave Team SHARK the boost it needed to reach the Formula Student 2016 challenge. They were able to import a 600cc CBR engine and a differential, and then build, assemble, and test the car.

Getting this far despite some pretty stiff competition is a pretty big achievement. The University of Moratuwa students were the new kids on the block, but they had the engineering chops to hold their own and even race (see what I did there?) ahead. This just goes to show how much talent Sri Lanka has.

Amith Mudugamuwa, the Marketing Director of the team, had this to say about the whole experience:

“It was a massive opportunity for us to experience advanced technologies in automobile engineering. We learnt how other teams have optimised their cars step by step. And we were lucky to talk with experienced engineers who are currently in Formula 1 technical teams.”

And Team SHARK is not done yet. With what they learned from this year’s challenge, they are already working on the design for their second car, which they plan to submit for next year’s challenge.

We’re looking forward to seeing what they come up with!