On the July 12, Cheryl Edison gave the keynote address at Disrupt Asia 2017, a startup conference in Sri Lanka. Edison came to Sri Lanka as part of the US Embassy’s Speakers programme—a programme that connects US experts with audiences around the world through workshops, lectures, and seminars. During her time here, Edison has been meeting with teachers and students at the University of Jaffna and the University of Sri Jayewardenepura, meeting with founders, and working with entrepreneurs who are part of the ICTA Spiralation programme.

When we met with Edison, she was in the middle of settling her Spiralation group down and organising refreshments. They are brilliant people, she says, with great business plans, but what she realised after meeting them in person was that they didn’t know how to stand in front of somebody, look them in the eye, and shake hands in a way that gives the other person confidence in them. She said this while looking us straight in the eye, making us regret the limpness of our wrist when we shook her hand earlier.

Edison exudes control. She is in control of herself, of her environment, and everyone around her. You get the impression that it’s not so much that you interview her, but rather that she’s going to give you important information in spite of your vague questions.

A Space For Making Atul Keshap, the US Ambassador to Sri Lanka, Cheryl Edison, and Muhunthan Canagey at the makerspace at the Colombo American Centre in 2016. Image credit: US Embassy

Edison believes in creating a space where people can launch businesses by “playing” and “tinkering” with things. In 2012, she launched The Gate 510, a million-square-foot ‘makerspace’ built on 24 acres of Silicon Valley property. She tells us that one of the key outputs of makerspaces are how it allows people to use their knowledge to engage empathetically with the world. Education in Sri Lanka, she says, is based on taking in lots and lots of information and putting it back out exactly as it was, with no mistakes. But in order to create innovative startups and in order to be successful, she stresses, a person has to take that knowledge and engage with the world.

She spoke of her meeting with Hasith Yaggahavita, the founder of Igniter Space, a makerspace for kids. Hasith wanted his children to engage with the world and build things, but with kits and toys like Lego, all they were doing was recreating the things they saw on the boxes. To enhance their creativity, he started giving them things to do that were not pre-made. He saw that this made them more engaged, so he created a makerspace where other kids could come and build things. After learning about how makerspaces functioned in the US, he went ahead and opened several more spaces, and started packaging the kits and selling them to parents.

Sri Lanka Vs. The World

Edison has worked in 47 industries on five continents, and she says empathy is very important in every one of them. Empathy drives engagement, and the best businesses in the world, she says, are successful because they engage with people. When asked if Sri Lanka has a lack of empathy and engagement, she hesitates to be specific. Each country, she said, is in a “certain moment in relation to empathetic engagement.” So it is not possible, she says, to define a country or a region a particular way.

She is absolutely certain, however, that Sri Lanka can compete with the rest of the world. She points to the basis, or the roots, of problems and problem solving. All our needs are, in essence, the same, she says. Addressing those needs via actual products and services is the work of the entrepreneur. The distinct specifics do not matter.

She illustrated her point.

In Jaffna, she says, was a young man who was trying to solve a problem. The Jaffna diaspora want to send gifts to people back home, but they have no easy way of doing so. The young man wanted to start a website where people outside of the city can make a purchase using the website and then he can make the delivery of the goods using his bike. The concept, Edison says, is that someone in one country wants to send a gift to a person in another country, and then someone in that local market will deliver it by bike. This is not all that different from eBay or Amazon, Edison says. But as soon as the entrepreneur makes the model function in Jaffna, he can extend it across other countries. He can scale and be the next eBay. Whether a company is local or global, the pieces are the same, says Edison. The rest is just a matter of scale. Edison at the American Centre in Jaffna in 2017. Image source: US Embassy

You do not have to be original, Edison states, when asked if clone companies are a bad business model. The most important thing for Sri Lanka now, she stresses, is to create density. The difference between Sri Lanka and other countries with thriving entrepreneurial ecosystems is startup density. The more startups there are, the better the ecosystem. 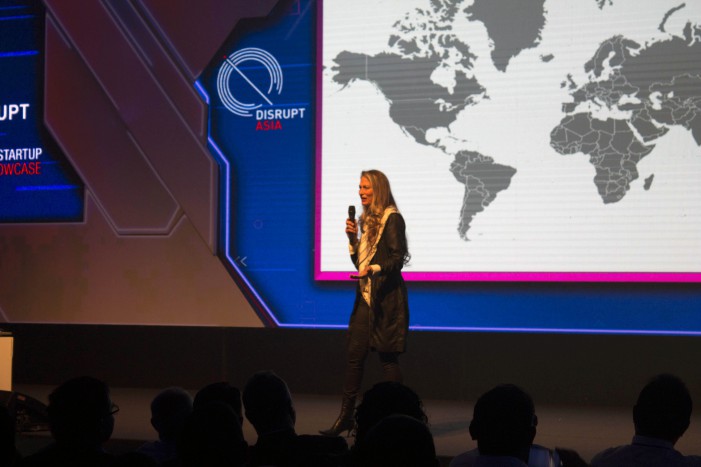 Sri Lanka’s infrastructure, however, is not the most conducive for startups, and Edison agrees that infrastructure is very important. The biggest gripe she’s found in her conversations with entrepreneurs is the lack of a payment system. Why is there still no Paypal, she asks, perhaps rhetorically. The banks block the easy exchange of funds, and until that is fixed, she says, the economy can’t grow. Entrepreneurs here cannot compete in the world market because they cannot get paid. The way to get money to Sri Lanka is through the banks, which is a slow and cumbersome process. The internet here is great, she says, and utilities like electricity are also very good. But not having a system like Paypal is a huge obstacle.

On the question of investors, Edison takes a different approach. There is a notion among entrepreneurs, she says, where they think they have a business plan but all they are missing is funding to be successful. She emphatically states that the majority of businesses she helped launch never had funding in the beginning. They first built a product or a service, and then they began to sell it. Once you sell, and have validation that the market wants it, she says, then you ask for funding. Don’t ask for funding until you’ve proven your concept.

Edison is convinced that there is nothing that is missing in Sri Lanka. She feels the country has all the talent and all the resources it needs. Sri Lanka already is a market leader in many things, she says, it’s just that no one knows it. She told us that Sri Lanka makes some of the best clothing in the world, and some of the best IT products, but that they are all white-labeled. She strongly advises that we brand the products and services we have as our own, not give it away as work for hire.

Make the product, she says, build the brand, and hold the value in the country while taking the brand global. According to Cheryl Edison, we are already doing good things; we just need to make the world aware of it.