Over the last week, mobile phone owners in Sri Lanka have been sent into a tizzy by a slew of phone calls from locations outside of the country. Typically, the call would last just long enough for one ring and then cut off, leaving the recipient in an agony of curiosity, unless you are one of those people who never pick up calls anyway. Isolated incidents would have largely passed unnoticed, but over a period of a few days, a significant number of people received these calls. Rumours have been floating around about the dangers of these scam calls.

Unsurprisingly, various rumours have been floating around with regards to these calls. Some of them suggest that these calls are from ISIS. Others state that returning these calls will allow scammers to download your contacts and your financial information. These, and a lot of other conspiracy theories, are largely untrue.

One Ring To Scam Them All

What is true is that these calls are coming from scammers. Using robocall devices, scammers send out calls to large blocks of phone numbers. Out of curiosity, some of these recipients might call these numbers back, leaving them vulnerable to scammers. The theory is that when calling back, the victims are routed to a premium-rate phone number, that charges them very high rates per minute. The longer the scammers can keep the caller on the line, the higher the charges that can be billed. Some of the theories state that these premium-rate lines are adult entertainment services. So if you hear heavy breathing or a sultry voice, hang up fast.

This is called the “One Ring” scam, though in our opinion it would be better called the “Carly Rae Jepsen” scam, for its rates of success. Here’s my number. Call me maybe.

The damages that these calls can inflict are also largely exaggerated. Should you be charged an exorbitant amount, you should be able to get this reversed by contacting your operator. Stories of thousands of dollars being charged to accounts are, again, exaggerated.

When Roar spoke to the Telecommunications Regulatory Commission of Sri Lanka,  Deputy Director and spokesperson, Menaka Pathirana, informed us that this sort of thing wasn’t new at all. And in fact, it isn’t. The scam has been around for a while, and the FCC even has a guide on it.

The TRC and the telcos have independently launched separate investigations into this scam. 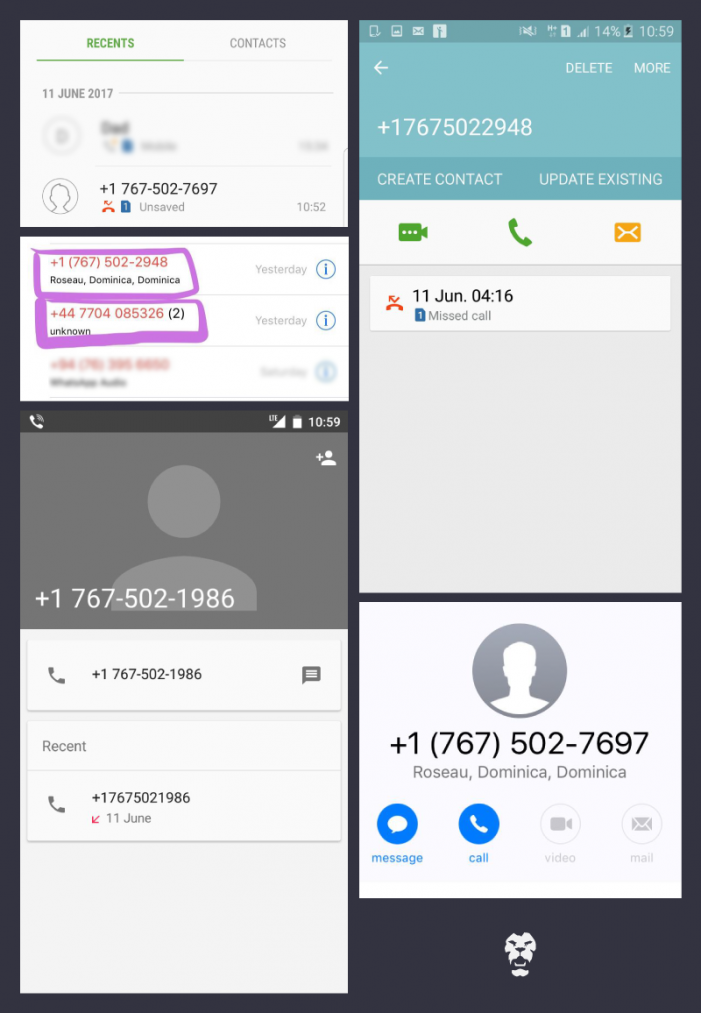 Users have been receiving scam calls from a variety of numbers.

The majority of calls appear to originate from Roseau, the capital of Dominica. But calls have been coming in from other locations as well.

What’s Been Done About It

Basically what the TRC advises us to do is to not call back IDD numbers that we are not familiar with. They have also published an official statement (in Sinhalese) on their website where they explain what is happening and advise people not to call back.

Roar spoke to Dialog, too, about the increase in scam calls. Dialog informs us that they’ve been on top of the situation since it began. Their team is constantly identifying the numbers being used to commit the fraud, and on June 11, took steps to block these numbers at the international switch. So if a user does try to call the number back, their call will automatically be dropped and they will not be charged.

According to the TRC, Mobitel has also blocked these numbers, and the other networks have not received any complaints so far.

Put A Ring On It

By now, the number of scam calls would have dropped drastically as networks identify and block the sources. The possible danger these scams could have posed are largely exaggerated, except for a mild social media frenzy, things came back to normal pretty quickly.

In any case, it is highly unlikely that anyone’s going to call back an IDD number if they can help it. The scammers probably lost more than they gained, targeting Sri Lanka.