Sri Lanka’s budget for 2017 is leaning heavily on the telecommunications sector. The levy on internet services is going up to 25%, the annual spectrum fee is going up by the same amount, all operators will be forced to provide 3G coverage, and each new sim card will have an additional levy of Rs. 200. That’s a pretty sneaky move. Force telecom providers to give everyone better internet just so they could tax it.

This begs the question: how well is the telecom industry doing, that draws the Government to it like Samson to Delilah? The Telecommunications Regulatory Commission of Sri Lanka keeps a close eye on the numbers, and they are pretty revealing. The most recent available set of statistics from the TRC are for June.

There are three operators licensed to provide fixed lines in Sri Lanka:

Of the three, SLT is the only one with a current license. As of June of this year, both Dialog and Lanka Bell’s licenses are still in the process of renewal and have been for a while (nearly a year, for Dialog). It looks like the authorities are playing hard to get.

There are 2,597,297 fixed line subscriptions in Sri Lanka, this year. As the graph shows, landlines are going out of style in a big way. They are so 2011. Fixed line subscriptions have been falling over the last few years

Strangely enough, there are still 5,416 pay phone booths, the majority of them in the Western province.

There are five operators licensed to offer cellular services in Sri Lanka:

Between them, they have 24,695,535 cellular subscriptions. That’s more than one cellular line per every man, woman, and child in Sri Lanka. Numbers have been increasing evenly over the years and show no signs of flagging. 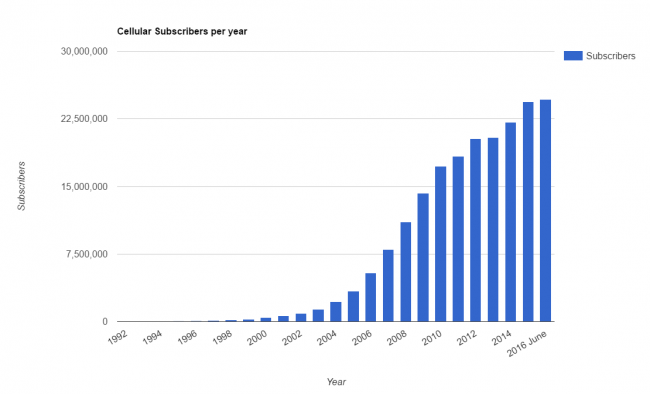 Cellular connections have been growing rapidly

Despite the smartphone penetration in the country, and the increased dependence of VOIP, traditional cellular voice calls are still quite popular. The second quarter of 2016 saw nearly 11 billion minutes worth of incoming calls over the networks, locally. Outgoing calls saw approximately the same number. That’s like a conversation that lasts nearly 21,000 years without a break. There was also over 280 million minutes worth of international incoming calls, and less than half that number of outgoing international calls. That makes sense since Sri Lanka has a large number of expatriate workers, who are the largest source of foreign exchange income to the country. There’s no huge variation in the amount of call minutes over the last few years.

There are 771,247 fixed lines connections as of this June, which is mainly broadband, but includes a small number of narrowband connections (2,475) as well. There is, however, a staggering number of mobile broadband subscriptions ‒ 3,461,044.

These numbers are divided between nine service providers.

Growth of mobile broadband has significantly outpaced that of fixed lines over the last few years. Given the difficulty of building ICT infrastructure in the country, mobile broadband makes a lot more sense to people, though proper coverage can be an issue. 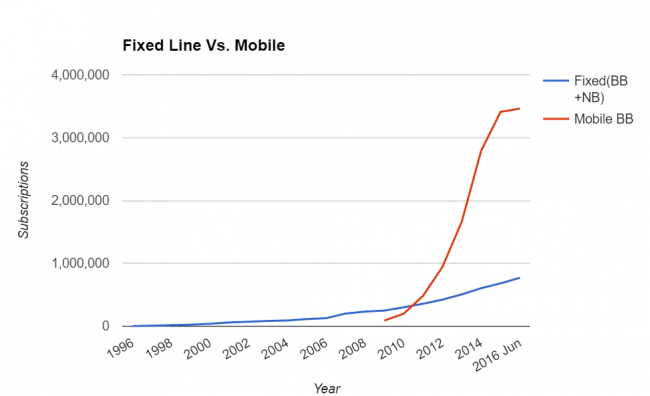 Mobile broadband has a significant lead over fixed line and shows nearly exponential growth over the last few years.

There are several companies involved in satellite and TV broadcasting as well. The licensed direct-to-home (DTH) service operators are:

There is also a satellite service based in Sri Lanka ‒ Supreme Sat (Pvt.) Ltd. Launches take place in China though.

Sri Lanka does have a pretty big telecommunications industry. The numbers for cellular connections and mobile broadband are growing incredibly fast, and that is where the future is. Sri Lankans need their connectivity, and it’s a shame that the new taxes are making access all the more difficult.