High spatial resolution images captured by drones are bettering those generated by satellites, and enabling researchers in Sri Lanka to study crop health and irrigation in greater detail.

A team of the International Water Management Institute (IWMI) has been testing the Swiss-manufactured eBee, or Electronic Bee in the skies above the Anuradhapura district, this month (September). “Usually, the clear sky window doesn’t coincide with a satellite pass,” says Salman Siddiqui, head of the organisation’s geographic information systems.

“With a near infrared sensor on board, the eBee can help us or farmers identify stress in a crop 10 days before it actually shows up physically,” says Siddiqui. Multiple images taken by a drone can be stitched together to produce a digital surface or elevation model in virtual 3D. These can, for example, help identify areas vulnerable to flooding. 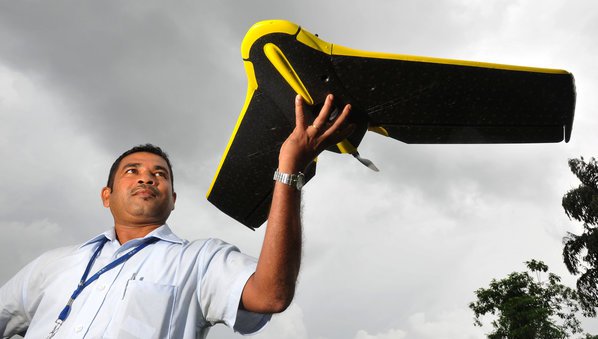 The 16 megapixel camera on-board the eBee boasts a spatial resolution of up to three centimetres which is significantly more detailed than images generated, for instance, by Google Earth which clocks in at five metres.

The drone also allows scientists to determine the frequency with which images are updated. In contrast, satellites data is usually refreshed only every 15 days or so. “Of course another major factor is the cost of satellite images, particularly when the area has to be covered several times,” says Siddiqui.

The eBee can spend up to 45 minutes in the air on a single charge of its batteries. Its sensors keep it stable through shifting winds and allow it to avoid other objects that might be sharing its airspace. On completion of mission, the eBee lands automatically, guided by its artificial intelligence module and the global positioning system.

P.M.P. Udayakantha, Sri Lanka’s surveyor general, expects that the eBee will come in useful in developing a national cadastre and doing strip surveys along road traces, canals and highways. “We are planning to do a survey of Badulla town with the UAV — this can expedite most of the work,” he tells SciDev.Net.

Siddiqui says that because drones fly below the clouds they have a clear view of the terrain even in bad weather. “It is an important advantage in emergencies — heavy rain and cloud cover can make it almost impossible to use a (satellite-based) earth observing system, to assess the flood extent or damage.”