The Drone Scene of Sri Lanka

Okay, not really, but almost every high profile event in Colombo these days, from concerts to beach parties to political rallies, seems to be literally buzzing with the unmistakable sound of radio controlled flying machines hovering ominously above the crowds. These machines often come with a GoPro (or similar) camera mounted at the front, for a bird’s eye view of the proceedings that the event organisers proudly and prominently display on their Facebook page, post-haste. But just how safe are these contraptions, and how exactly does one go about flying one without getting arrested?

To find out, we met with drone enthusiast Wimukthi Bandara who likes to get his hands dirty building and tinkering with these magnificent beasts, both professionally and as a hobby. He owns a first-person-view (FPV) racing quadcopter that he built himself and is currently in the process of building another for aerobatics and training. All in a day’s work for this self-confessed electronics junkie!

“For me, it’s purely a hobby, and more than the flying, I love the process of building these machines. It’s all the electronics and programming that goes into it that excites me the most,” he says.

Is it a plane? Is it a bird? Is it a radio controlled multi copter? The word ‘drone,’ popularised by mainstream media in relation to autonomous predator drones used in warfare, has made its way to everyday lexicon to [sometimes inaccurately] describe any type of unmanned aerial vehicle (UAV). Wimukthi specialises in multi-rotor aircraft, or multi copters as they’re known among hobbyists, a very specific type of UAV.

“They share the same basic principal of helicopters. I personally refer to them by the number of rotors used. For example, if three rotors are used, it’s a tri-copter; quad copters use four rotors and hexa-copters use six, and so on,” he explains.

Radio controlled UAVs have been around for decades, so what is up with our sudden obsession with drones?

It’s all in the flight controller, says Wimukthi.

“In the past, there wasn’t enough computational power to put a flight controller in such a small space. The computers just weren’t fast enough. A multi-copter is inherently aerodynamically unstable, unlike an RC plane that can glide.  This would just fall off. The computer keeps it stable. About 2000 times a second it’ll check its sensors, change the speed of the motors, etc. to keep it stable,” he elaborates. 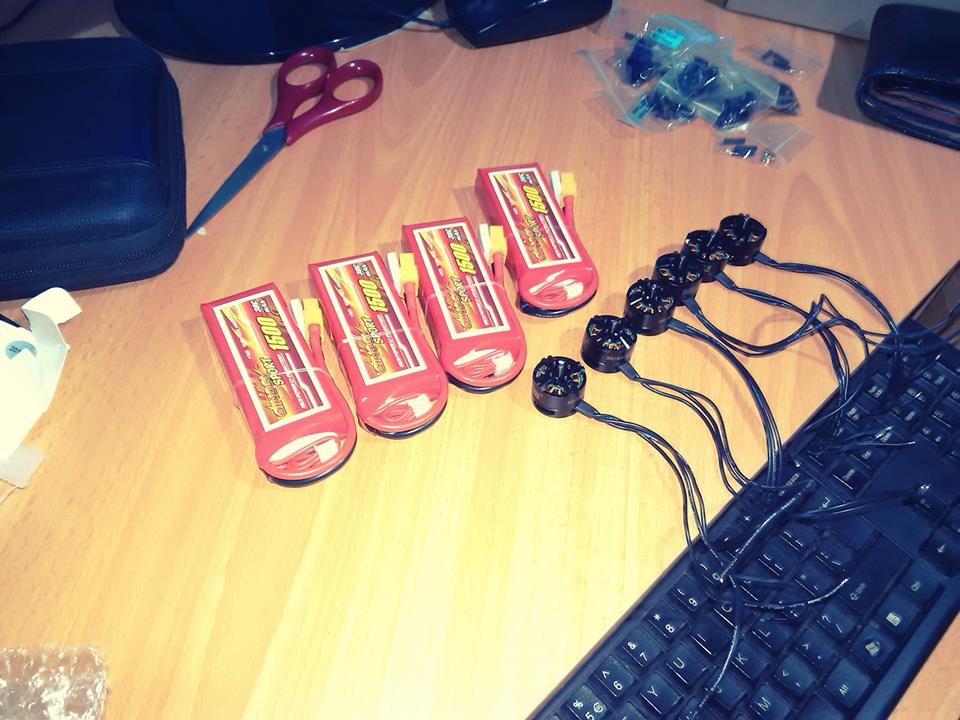 Wimukthi was kind enough to let this writer take one of his very expensive toys for a quick spin at his workplace, and rest assured, it was an immensely exhilarating experience, as short-lived as it was.  The FPV quadcopter was surprisingly loud for something that ran on electricity and the thrust generated by the four rotors and the resultant wind was literally and figuratively hair-raising.

FPV quadcopters, explains Wimukthi, are generally used to see things from the machine’s perspective and can give you something very close to the sensation of actually flying through the air.

“To achieve this, FPV copters use a combination of an onboard video camera, a video transmitter and video goggles that you wear while flying. One advantage of FPV flying is that you don’t have to worry about orientation of the aircraft, for example when you’re flying line of sight (LOS), you always have to reorient when you turn the aircraft, if you turn it in a way that its front is facing you then all the controls are reversed. Since FPV allows you to see what the aircraft sees, you always have perfect orientation,” he says.

Aerobatics is a different and unique way of flying multi-rotor copters, where you do high-speed maneuvers and flips in rapid succession. Needless to say, this requires a tremendous amount of practice, and the aircraft itself has to be specially built to be very fast, light and responsive.

Watch out for falling drones

Flying multi-copters is not something that should be taken lightly, warns Wimukthi, as they can be quite dangerous in untrained hands. At its maximum speed of 120 km/h, even relatively light copters like his 400 gram FPV quad could cause serious injury if it were to fall on or collide with an unsuspecting passerby.  There is also a real and ever-present danger of the battery dying midflight; but thankfully,  Wimukthi’s radio control comes with a built-in warning mechanism that gives him enough time to land his drone safely should this ever occur. 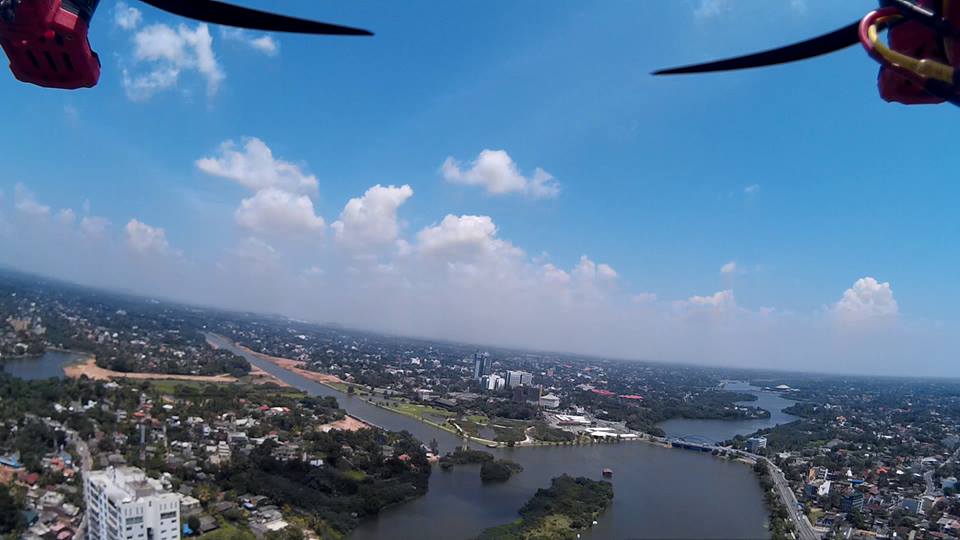 “At full throttle, if your hand accidentally makes contact with the rotors, there’s a chance your fingers will get chopped off. It usually depends on the propellers you use, but you can still get cut. Someone else was flying my quad once and they lost control of it and I had to catch it with my hand,” says Wimukthi.

He even has the scars to prove it; there are cuts all over Wimukthi’s fingers from more than one accident involving his racing quad.

Wimkuthi advises all drone pilots to avoid using the autopilot feature and to learn to fly manually. The autopilot uses an array of sensors to do its job, making it prone to accidents, whereas the pure manual mode only uses one sensor which reduces its points of failure significantly.

This sensor, known as a gyroscope, informs the flight controller of the angle of the craft and, says Wimukthi, a pilot skilled in manual piloting has a much better chance of recovering a failing craft than a novice who’s only used to assisted piloting.

Are these things even legal?

Flying and owning multi-copters is perfectly legal in Sri Lanka, according to Wimukthi, as long as your equipment meets government regulations and you don’t fly them in restricted areas.

“You only need approval from the Air Force/Defence Ministry only if you’re flying it public places in urban areas or restricted areas. It’s totally fine to fly them in your backyard if you like,” he says.

The company that Wimukthi works for had to obtain Air Force permission to use their gigantic hexa-copter at the recently held Bradby game in Colombo.

The Telecommunications Regulatory Commission (TRC) has issued regulations with regard to transmissions, and it is mandatory that your equipment meets them.

“There is a power limit for amplifiers. Anything below 200 milliwatts is legal. All of these copters have less than 200mW transmitters. The quad uses a 2.8GHz frequency, for the control. The video links usually use 5.8GHz. Those are the bands that the TRC regulates,” says Wimukthi.

It goes without saying that this equipment doesn’t come cheap, and flying and maintaining drones is something of a long term investment.

“It’s an expensive hobby, especially the initial investment. You need to know what you’re doing or you will get scammed by snake oil vendors just like with any other hobby. And you have to invest in them continuously since it’s inevitable that they crash at some point – sometimes multiple times a day when it comes to racing multi-rotors. You need to spend money on repairs and propellers (lots and lots of damaged propellers),” says Wimukthi.

If you just wish to get a taste of multi-copters you can buy a cheap quadcopter like the very popular Hubsan X4 for around $50 and then decide if you want to get into building them yourself. However, buying a readymade copter can be two to three times more expensive than building one yourself, says Wimukthi, although, sometimes, it could be the other way around, as most enthusiasts tend to upgrade.

The hexa-copter that Wimukthi built for his employer is an imposing piece of hardware that has seen such serious upgrades and can be spotted at various events that the company provides media coverage to.

“It’s purely made as a video platform, to be stable and with the ability to carry a large payload. It features camera stabilization to reduce camera shake as to give you the smoothest possible video output. We use it to create highlight videos for special events, but the possibilities are endless,” says Wimukthi.

With the advent of peace, notwithstanding the recent media frenzy over a fallen Phantom, any negative connotations previously associated with radio controlled aircrafts are slowly but surely disappearing from the public conscience, and it looks as though drones are here to stay. The day that multi copters with compact cameras become just as ubiquitous (and irritating) as selfie-sticks may not be far off.

Maximum thrust takeoff test.Total weight of the airframe is 2.5Kg, maximum thrust 8Kg, reached an altitude of around 300m when I brought it back down.Note of caution: High altitude flying with multirotor aircraft is extremely risky. Risk factors include high wind that can carry away the copter (Which you can see on this video itself, where I had to do an extreme correction over the water area), loss of visibility, and loss of radio contact, all of which can lead to your precious copter being destroyed from a free fall.