Uber has been around for about six years and launched in Sri Lanka a couple of weeks ago. There has been a lot of buzz around how the service works in a Sri Lankan context and questions around how Uber would adapt to the challenges of the Sri Lankan ecosystem. A big part of how Uber would adapt to Sri Lanka lies in their proprietary technologies. Roar decided to provide our readers with a high level understanding of how the technology works and what it means to the end user. With regards to the algorithms they use for scheduling and connecting customers and drivers, Uber has been beset by criticism from governments, legacy taxi cab companies and in some instances, its own customers since its inception in 2009. Some of the criticism has been centered around the “surge pricing” that Uber reverts to during periods of high demand. This dynamic pricing algorithm is a key component of its intellectual property portfolio.

It’s difficult to talk about Uber’s technologies without discussing its valuation. Uber doesn’t really own any physical infrastructure. Unlike legacy cab companies, they do not own fleets of cars, garage spaces and service centers.

Given these reasons, Uber’s current valuation which stands at $50 billion can be shocking to most. The process of valuation is fairly imprecise, so take this valuation with a grain of salt. What is clear is that Uber has tried to set itself apart from other “ride sharing” type companies like Lyft by aggressively focusing on intellectual property (IP). Uber has filed 11 patents to date, some of which are published (but not granted) in the US, as well as other regions. Arguments for and against software and algorithm patenting notwithstanding, if these patents are granted, Uber would enjoy a rather comfortable technical monopoly. This in turn has the potential to increase its valuation further. While the publishing of a patent does not guarantee a grant, we can be fairly confident that technology and IP play, and will continue to play, a significant role in Uber’s strategy and valuation, especially if Uber decides to go public. 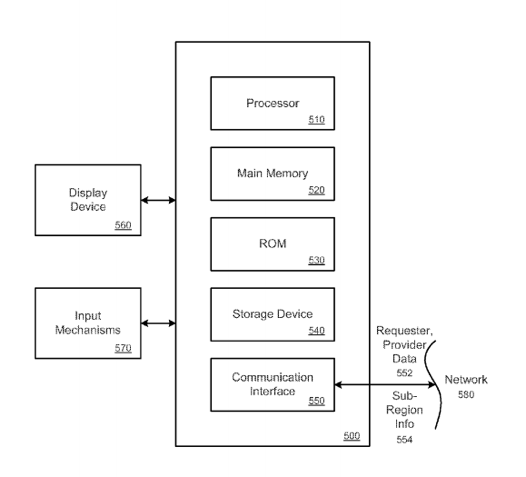 The patent titled, System And Method For Providing Dynamic Supply Positioning For On-Demand Services seems to be one of the core pieces of technology that Uber has decided to protect in US markets. This patent describes a system for drivers to (automatically) determine the demand for rides in a given geographic area, along with the number of drivers currently servicing the area.

Based on Uber’s newsroom posts, tweets and a very interesting post where Uber’s Data Evangelist Bradley Voytek was interviewed, we can safely assume that Uber uses learning based algorithms. Thus it is safe to assume that all of the algorithms mentioned above have some form of machine learning and predictive component built into them. The predictive nature of the algorithm is also explained in Uber’s patent application for its dynamic supply positioning system.

What’s unclear is that if Uber has filed for any patents in Sri Lanka. Given the size and value of the market in Colombo it seems unlikely that Uber would file any IP in Sri Lanka. In our opinion this may even be an opportunity for local competitors like PickMe to gain a technical monopoly in the Sri Lankan market by filing their own IP locally prior to Uber. @Afzy_T During this testing phase, our ETAs are slightly off, but improve over time as our system is self-learning. More accurate ETAs soon.

The Technology & Its Implications for Sri Lanka

From a math and technology point of view, our tech editors are big fans of the Uber algorithm. In one part of the algorithm known as the “destination model,” the Uber data team uses what’s known as a Bayesian approach to modelling, which in layman’s terms means that they use a tried and tested, yet extremely sexy, way to predict things like addresses and locations. This is the same approach that Uber data geek (no pun intended), Nate Silver uses to model and predict elections as well as sports statistics.

However, many have argued that Uber’s algorithms are not what they seem and tend to be misleading. The value proposition for the driver and the customer is fairly clear. What’s not so clear is if Uber’s algorithm is as fair as they portray it to be or whether there’s more to the supposed information brokering model that they and many others such as AirBnB follow. Wired Magazine, had the following to say about CEO Travis Kalanick’s vision for the company:

Kalanick describes the goal of Uber as relentless reliability: to manage the marketplace math so that supply and demand match as perfectly as possible in the face of ever-shifting, highly unpredictable circumstances. And if that means charging $175 for an SUV ride in the snow — seven times the normal market rate — that’s not greed. He says that’s just Uber working like it’s supposed to.

So is the Uber algorithm is an accurate representation of the taxi cab market? Or is Uber exploiting and manipulating the market for their own benefit? Part of the problem is that it’s extremely difficult to come up with a generic mathematical model for the taxi cab market.

The standard line about the Uber technology and algorithms go like this,

The app connects drivers with riders, with a fluctuating price that seems to correlate with demand. You rate the performance of the driver as you would an independent seller on Amazon or eBay.

Drivers are shown a map of “surge zones,” which reflect the demand for rides in different parts of the city at a given time.

So why does Uber’s fluctuating pricing exist? The answer lies in understanding that Uber is fundamentally a marketplace. Uber implemented its “dynamic pricing” algorithm to address a problem in supply and demand. When demand is materially outstripping supply, the “surge” pricing kicks in. This is to ensure that there would not be any “unfulfilled requests.” When supply goes down, one would only have two options, either increase supply in the short term (increase the number of cars) or the more practical, reduce demand option by introducing a surge price. Uber users both of these mechanisms to ensure that reliability is maintained (a key value proposition for Uber) and a sizable number of rides are completed with no “unfulfilled requests”.

Jared McKiernan has an excellent piece at Above The Crowd where he uses basic economics to analyze and breakdown Uber’s dynamic pricing algorithm. Do we have full visibility into Uber’s algorithm? No we don’t, but at least we can infer some portions of it as Jared has done.

Uber’s algorithmic approach to pricing and defining the taxi cab market is not without its vocal critics. Data & Society has an excellent bit of research conducted by Alex Rosenblat and Luke Stark which argues that consumers are not getting the full picture and that the supply of drivers is mobilized to meet predicted passenger demand as opposed to real demand through the use of surge pricing. Alex, who studied how Uber drivers interact with the Uber app, with her colleague Luke Stark, notes that:

Drivers, and users more broadly, lack an understanding of how algorithmically-curated information flows are filtered and manipulated for easier (and sometimes, misleading) consumption.

Uber’s access to real-time information, about where passengers and drivers are, has helped make it one of the most efficient and useful apps produced by Silicon Valley in recent years. But if you open the app assuming you’ll get the same insight, think again: drivers and passengers are only getting part of the picture.

It’s clear the both drivers and customers do not have a clear understanding of how the positioning, as well as pricing algorithm, works and in particular how Uber may be curating and manipulating information for consumption. Is this wrong on Uber’s part? The simple answer is that we don’t know. As we spend more time with these kinds of systems and as we start comparing it to other similar, as well as dissimilar, services the landscape would get a lot clearer. Jared McKiernan’s analysis of the algorithm is slightly optimistic. He argues that dynamic pricing has been tried and tested before and notes that this was the basic premise behind Ebay’s original business model. He notes further that as such a business evolves these “kinks” do get ironed out. He notes that Uber has no intentions of modifying dynamic pricing precisely because they feel that it is in the best interest of the consumer.

What can Sri Lanka take away from this debate? To start off, expect things to be a bit bumpy until the learning algorithms are optimized for local road conditions and demand. Your waiting times may be off the mark, especially during periods of supply scarcity. Keep in mind that this our hypothesis, and Uber Sri Lanka could very well have ironed out some these algorithmic kinks by the time this post is published. In the long term, Sri Lankans need to invest some effort in understanding how the Uber business model, as well as the algorithm adapts to our local markets in order to ensure that Uber follows best practices and complies with regulations that are designed to protect everybody –  and not just big business.

Check UBER out for yourself! Use the promo code ROARLK to receive LKR 500 off your first trip! Valid till End of 2015.