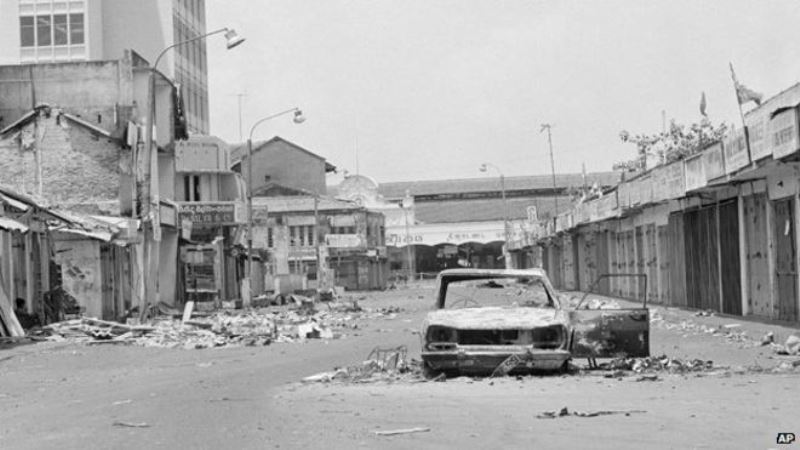 Today marks the 33rd anniversary of Black July, a massacre that triggered the most violent period in Sri Lanka’s modern history.

Black July, or කළු ජූලිය, refers to a series of widespread anti-Tamil riots aimed at the massacre and persecution of Sri Lanka’s Tamil community. The riots are classified as ‘pogroms’ as it is believed they were intended to ‘cleanse’ the country of the Tamil ethnicity.

The riots began as a ‘response’ from enraged Sinhalese groups who reacted to a deadly attack by the Liberation Tigers of Tamil Eelam (LTTE) that killed 13 Sri Lankan Army soldiers. The pogrom lasted seven long days and fueled the hatred and paranoia among communities that would last decades.

Beginning in Colombo on the night of 24 July 1983, the riots spread to other parts of the country. Over the course of the next seven days, mobs targeting Tamils burned, looted, and killed.

Estimates of the death toll range between 400 and 3,000 people. Nearly 8,000 homes and 5,000 shops were destroyed, and 150,000 people were made homeless. The economic cost of the riots was estimated at $300 million. The statistics often vary depending on the source.

In the ensuing years, many Sri Lankan Tamils fled to other countries such as Canada and the United Kingdom, and many thousands of Tamils youth joined militant groups.

The Spark That Ignited The Fire

Tamil homes and businesses were the targets of deadly violence during a month which came to be known as ‘Black July’. Image courtesy thesundayleader.lk

It is certainly a sad fact that 68 years of our freedom has been largely spent engaged in war and conflict over land and recognition of self, state, and ethnicity. Among those horrifying historical footnotes, Black July is generally seen as the start of a full-scale Sri Lankan civil war between the Tamil militants and the government of Sri Lanka.

July has become a time of remembrance for the Sri Lankan Tamil diaspora community around the world and Sri Lankans in the country alike.

A group of LTTE rebels ambushed the Four Four Bravo military patrol in Tirunelveli near Jaffna in northern Sri Lanka.

One officer and twelve soldiers were killed immediately, while two more were fatally wounded, bringing the final death toll to 15. The attack was reportedly carried out by a regional colonel of the LTTE known as Sathasivam Krishnakumar aka Kittu.

Going against the standard procedure of producing the bodies of slain soldiers to their respective families, the government took steps to hold a funeral ceremony at the Borella Cemetery with full military honours. The decision was taken despite the families requesting the bodies of the soldiers in order to be buried according to tradition.

A large crowd of people, agitated by the news of the thirteen deaths, gathered to attend the funeral ceremony at the cemetery. The crowd demanded that the bodies be returned to the families, growing tense every passing minute.

Police officials, suspecting a backlash from the crowd, ordered the immediate dispersing of the crowd. The riot squad was ordered to fire tear gas and baton charge the agitated crowd to get them to disperse. The crowd responded by clashing with the police.

President J. R. Jayewardene, upon hearing of the situation, agreed to cancel the army funeral and hand over the bodies to the families. The army announced this decision to the gathering, who left the area only to start looting and burning Tamil-owned properties.

The riots that started in Borella spread to Colombo by the following morning. President Jayewardene implemented citywide curfew after reviewing the situation with the Security Council.

Subsequently, the riots spread towards Colpetty, Wellawatte, Dehiwala, Ratmalana, Nugegoda, and Kotte. Reports state that by noon, many parts of the city were on fire.

The curfew ordered by the president from 6:00 p.m. onwards, was brought forward to 2:00 p.m. and was extended to the Gampaha and Kalutara districts. Violence was also reported in Galle, Kegalle, Trincomalee, and Vavuniya.The police were unwilling, or unable, to enforce the curfew. The army was then called in to help the police while eyewitness accounts state that several army officers supported the rioters and looters in the burning and pillaging.

The mobs were in possession of voter registration lists, which helped them easily identify Tamil residences. This also led many to believe that these were organised attacks, with support at government levels.

Many Tamil families sought refuge at churches or at their neighbours’ homes.

A prison riot broke out at the Welikada Prison and 37 Tamil prisoners who were detained under the Prevention of Terrorism Act were murdered by the inmates.

Riots and looting by mobs were reported in Kandy and Gampola, while fires still burned in Wellawatte and Dehiwala.

The curfew was extended nationwide as a precautionary measure, as there were more outbreaks of violence against Tamils in areas where various ethnic groups lived together.

The soldiers killed in the Tirunelveli ambush were quietly buried during the night curfew.

Mob activity was reported as isolated events within the Central Province.

At Fort Railway Station, a train heading for Jaffna was stopped as it was pulling out of the platform, and Sinhalese passengers started attacking Tamil passengers, killing twelve. A second riot at the Welikada prison riot was reported, where inmates killed 15 Tamil prisoners after overpowering the prison guards.

Two Tamil prisoners were killed during a riot at Jaffna prison on the same day.

Former president Jayewardene has been criticised for his delay in imposing curfew, and failure to sufficiently condemn the mob violence. Image courtesy sundayobserver.lk

Following an emergency cabinet meeting, President Jayawardene made a primetime televised address in which he appealed for an end to the violence.

Jayewardene blamed the violence on “the deep ill-feeling and suspicion that has grown between the Sinhalese and the Tamil people” caused by the calls for an independent Tamil state which began in 1976.

Jayewardene vowed that the “Sinhalese people will never agree to the division of a country which has been a united nation for 2,500 years” and announced that the government would “accede to the clamour of the Sinhalese people” and ban any party which sought to divide the nation.

Violence continued in Colombo, as false information spread that the army had engaged the LTTE who had allegedly entered the city.

Mobs gathered in the streets of the city with various armaments, ready to fight the anticipated onslaught, but faced nothing.

More individuals were murdered and property was burned and destroyed.

Incidents of violence were reported in Nuwara Eliya, Kandapola, Hawa Eliya and Matale. The rest of the country was quiet.

Tamils were targeted in a manner that was not just violent, but systematic and organised. This phot shows a row of shops that had been set on fire. Image courtesy AP

Roar spoke to two eye-witnesses of the anti-Tamil pogrom that took place in Colombo. Both of them were living in areas where the pogrom spread its fire; Colpetty and Nugegoda.

One of them is June Beiling, a retired school teacher in her late seventies.Thirty-three years since the riots, her experiences are still fresh in her mind.

“In 1983, I was teaching at Anula Vidyalaya in Nugegoda. The previous night, [July 25] we got a call saying there was an incident in Borella. On the following morning, however, there was nothing on the news and we all thought it was an isolated incident and I went to school. During the first period, we had barely started our day, the office clerk came running in saying that all the shops in the Nugegoda Junction had been set on fire. And when we looked out, we could see the whole sky absolutely black. I’ve never seen the sky so black,” she recalled.

“We immediately herded the children into the school hall. Immediately after that parents started pouring in to get the children out. There were parents at the gates and the teachers were  trying to reason with them because they could not just hand over the children to anyone. It was absolute pandemonium at that time,” she said.

“There were many men coming in who demanded that the children be quickly sent home because they wanted to set fire to the Hindu shrine next to the school. They were stopping cars in the middle of the road and were getting petrol. Because of this, there was a huge traffic jam just outside the school.”

On her way home that evening, Beiling and her family passed through an unrecognisable city.

“When we (my husband, myself, and my children) were returning home, we saw shops on fire, clothes and what not thrown about into the road. We saw army vehicles and army soldiers sort of egging the people on, saying words of encouragement to the rioters,” she said.

She also does recall, however, that “There were many Sinhalese who gave other people refuge and saved them from the rioters. This was just the mob mentality of the people and I don’t think many of them knew why they were doing this. It was obvious that this was very organised. I don’t know who was responsible for it, regardless of the many opinions. All I know is that the mob was aroused and the mob themselves didn’t know what they were doing most of the time.”

Suseeli Rajaratnam, a resident of Nugegoda, was a direct victim of pogrom.

“The night before they set fire to Colombo, one my close friends called me and told me not to send my children to school the following day. He said that something had happened at the cemetery. But my husband and I thought if something happened, the children would be safer at school and we went to work after dropping off the children,” she said.

“On my way to work, I saw the streets filled with chaos; crowds running here and there, setting fire to shops. They stopped vehicles and buses, collecting petrol. Later on, I heard that the mob had set fire to people inside vehicles as well. I was rather alarmed.”

Rajaratnam and her family had to seek refuge at their parish church.

“There, the pastor and several others got together to help those who were affected by the riots. They smuggled people to the church and brought food and provisions to people who had no way of leaving their homes. We stayed at the church for close to two weeks,” she said.

Lessons Learnt (Or Have We?)

A scene from Borella, where the violence started off from. Image courtesy thuppahi.wordpress.com/Victor Ivan

Thirty-three years after our history’s bloodiest massacre, and seven years since the end of the conflict it triggered, after many discussions and attempts at reconciliation, Sri Lanka is yet to reach a satisfactory level of understanding between ethnic communities.

Isolated acts of racism and hatred are still being reported throughout the country, the most recent being the Jaffna University clash, the Aluthgama incident, and the Sinha-le trend.

Although the unrest created by every incident dies down eventually (or at least seems to), each time such an incident occurs, we wonder, have we not learnt our lessons yet?

The incidents of Black July have left a negative imprint on our nation, one that we often want to forget, or distance ourselves from. As important as it is that we look to the future and seek to move on, we also need to look back, as much as it hurts, and keep in mind that the darkest periods of our country’s history should be a reminder, a deterrent against venturing down paths of violence.