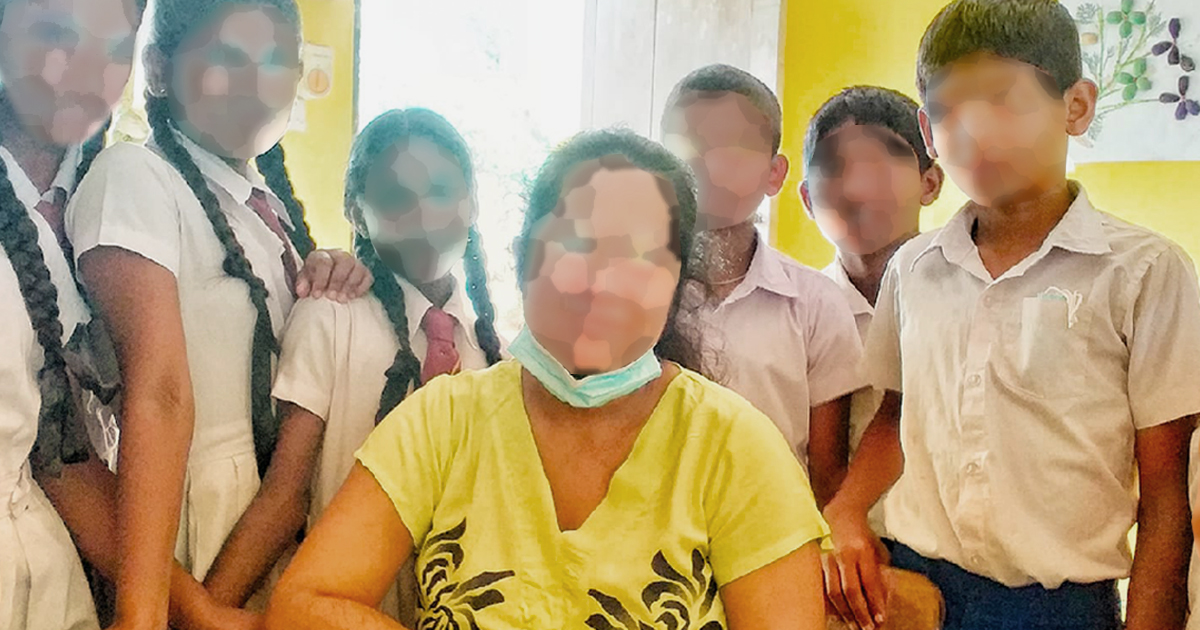 On 21 November, Iresha* (33) and roughly a hundred other public school teachers from around the country wore smart casual clothing to school in protest of the state forcing female teachers to wear sarees to work.

The anti-saree movement was the result of school teachers being exempted from a recent circular that allowed all public sector workers to come to work in casual clothes, considering the rising cost of living and inflation in the country. However, when Iresha came to school in a black high-neck kurta and white jeans, she was asked to go get special permission.

“‘Come in a saree, or not at all,’ the principal told me,” Iresha said. “He told me if I wanted to come to school in casual clothes, I’d have to go to the zonal education ministry office in the district and get special permission to do so. The principal is a good man. He is very supportive of the things we do in school. But when it came down to us wearing what we wanted, he was against it.”

Iresha was not the only teacher who was challenged for defying the saree-only dress code. The saree and the osariya [the Kandyan saree] have been the oldest form of women’s clothing in Sri Lanka, and are believed to date back 5,000 years, made common and popular during the British colonial period after it was introduced through the influence of Nayakkar kings of the Kandy kingdom. Today it is a standard outfit for all female public workers, including school teachers. While various other dress codes have evolved, this has remained immune to any change.

In the days that followed the protest, two public schools called for disciplinary committees to conduct investigations into the teachers wanting to wear casual clothes. In one rural school, parents staged a protest against the teachers’ choice of not wearing a saree to school. In another, teachers were harassed — as a ‘proactive measure’, the teachers alleged — by zonal education ministry officials after they wore casual clothes and posted photos on social media. One teacher was threatened by her principal; she recorded it on her phone, only to have the phone confiscated and the footage forcibly deleted.

All of the above occurred because some teachers chose to wear what they wanted, instead of adhering to an outdated dress code.

“It’s very difficult to teach the Grade 1 students while wearing a saree,” Iresha explained. “We have to dance and sing – being a teacher is an active job. And on top of that, going on the bus on a daily basis while wearing the saree is difficult. When you’re in a crowded bus, the pallu (saree pota or the tail end of the saree) gets caught in random places. If you’re on the footboard of the bus, it’ll keep flying in the wind. It can be dangerous. Wearing something casual, in comparison, is much easier.”

“We work with children. We cannot stay like statues when teaching, it requires us to be active,” Thilini Shalwyn (35), another teacher who did not wear a saree on 21 November, told Roar Media. “The saree or the osariya are constricting outfits.”

In September, the Ministry of Public Administration, Home Affairs, Provincial Councils and Local Government issued a circular permitting public sector employees to report to work in suitable attire, as opposed to the previous, stricter dress codes. The decision was made considering the rapid increase in prices of sarees and other clothing worn by state sector workers, the Public Administration Secretary P K Mayadunne said. The circular allowed public sector employees to wear any appropriate attire in addition to what is recommended for public service — which, up until this point, were sarees and osariyas for women and shirts/trousers or the national dress for men.

School teachers, being public servants, should logically be allowed to wear comfortable attire as well. That was not the case.

Despite the Ceylon Teachers’ Union’s request to the Education Ministry regarding the dress code of female teachers, Minister Susil Premajayantha said that there will be no changes made to it. “The saree and osariya are part of our culture. It is a part of our school system. We cannot and will not change this system,” he said in Parliament on 08 November.

“Nowhere in the law does it say that the sari is a uniform or that it is mandatory for teachers,” Shalwyn responded. “It’s been our [teachers’] choice; we buy it with our money, without any government help. We cannot accept the Education Minister’s statement; his word is not the law.”

Shalwyn, a prominent voice against the forced saree dress code since 2018 and a teacher of Grades 6-11 from the Central Province, claims that the debate has resurfaced due to the rising cost of living following the economic collapse of this year. “Even [back]then, we received the same criticism; people who claimed that the saree is better, that it is culturally appropriate, and is an example of discipline and civility. But it has come to a point where our cost of living is too extreme.”

The teachers justify the move to wear comfortable clothing through the provisions of the Companies Act, No 07 of 2007, the primary legislation that governs teachers as state employees. “So we decided to wear smart casual clothing that is appropriate for a school environment starting from 21 November, and to continue to do so,” Shalwyn said.

It started off as a WhatsApp group, Shalwyn said, with like-minded individuals who were against the strictly prescribed dress code for female teachers. Gradually, more members joined after the debate picked up momentum on social media, going as far as to create a group named ‘End The Sari Curse.’ “This was when the movement truly began, when the ideology spread across the internet, with people with similar ideas beginning to support the matter,” she said.

Government school teachers are paid considerably lower salaries than private school teachers; salaries can range from LKR 45,000 to 150,000 per month, depending on the qualifications and experience of a teacher. With almost eight years of experience, Shalwyn earns roughly LKR 55,000 a month. Iresha, with six years of experience, earns LKR 52,000 a month – of which, she said, LKR 7,800 is spent monthly to travel some 19 kilometres between her home and the school she teaches at.

“I used to buy a good saree for LKR 2,500-5,000,” Shalwyn said. “Now, of course, those prices have doubled. Saris also have to be altered depending on the body measurements, the jackets have to be resized — all of which costs extra. So spending LKR 15,000-20,000 for clothes from our salaries is an unnecessary expense for us. It’s money that could be used to buy groceries.”

While the Education Ministry is yet to respond to the teachers’ breakaway from tradition — various parties claim that the Ministry is set to take legal action and/or conduct disciplinary action against the teachers — the movement against the forced saree-only dress code seems well-prepared to fight for their right to choose.

“The clothes we want to wear is our fundamental right,” Shalwyn said. “If anyone were to challenge that, we are ready to fight it in a court of law as it violates our human rights. I believe they will do whatever they can to intimidate and threaten us, but we will continue to wear casual clothes.”

After 21 November, Iresha returned to school in a saree, fearing the reprimanding she received the previous day. She said, “I was told to come for a meeting at the zonal office next week. Until then, I will wear the saree, but I have hope that I will win this fight.”