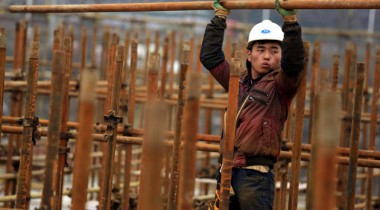 China’s ambitious moves to become a major player on the world stage has escaped no one’s attention. The giant nation’s political and economic heft is felt worldwide every time it throws its weight around. We in Sri Lanka feel it more than most people, with billions in debt looming over the economy and Chinese-funded infrastructure appearing as if out of nowhere in the last few years. You know this isn’t ad-hoc investment. What is the grand plan? A delegation from Sri Lanka consisting of Prime Minister Ranil Wickremesinghe, Ministers Rauff Hakeem, Sarath Amunugama, Malik Samarawickrema and various government officials left for Beijing on the 13th to attend a summit where the Chinese government would lay out this plan: The One Belt One Road Initiative.

Prime Minister Ranil Wickremesinghe arriving in Beijing to take part in the ‘One Belt, One Road’ summit. Image courtesy sundayobserver.lk

What Is The One Belt One Road Initiative?

When President Xi Jinping of China took office he showed signs of shifting China away from former leader Deng Xioping’s doctrine to build strength and stay away from the limelight. His key doctrine is the “Chinese Dream”. It’s a vague concept but usually interpreted as the “Two 100” goals:  China becoming a “moderately well-off society” by 2021, the 100th anniversary of the Chinese Communist Party; and China becoming a fully developed nation by 2049, the 100th anniversary of the founding of the People’s Republic. To this end, the aim is to build a strong Eurasian economic region, dominated by China, that can rival the US-dominated transatlantic economic region. Ultimately, China hopes to find more profitable ventures for China’s massive foreign exchange reserves and for Chinese infrastructure companies. China also hopes to extend its influence through economic means to bolster its territorial claims in places like the South China Sea. The way to get all this done is the One Belt One Road Initiative.

First announced by President Xi in 2013 it is an estimated USD 5 trillion plan to restart and expand the ancient Silk Road trading routes over both land and sea. They would do this by building the necessary infrastructure in countries along the routes with the help of Chinese funds. Theoretically, this would benefit both China and the host nation. According to some reports, the land route will begin in central China, go through Russia, Iran, Eastern Europe and terminate in central Europe. The sea route would hug China’s coastline, go through the South China sea to Indonesia and Malaysia, then to Sri Lanka, then Djibouti and through the Red Sea to Europe.

The land and maritime routes of the One Belt One Road initiative. Image courtesy Reuters

At the Belt and Road forum, President Xi said “We will build an open platform, defend and develop an open world economy, jointly create an environment good for opening-up and development, and push for a just, reasonable and transparent international trade and investment system so that production materials can circulate in an orderly way, be allocated with high efficiency and markets are deeply integrated.” He further pledged at least USD 113 billion in extra funding. Dignitaries from 57 nations were confirmed attendees while nearly 70 countries and organisations had signed up to the project. Most leaders who attended were said to be smaller nations that depend on China. Most western powers were represented by lower ranking officials. However, the US sent a senior security council official after the trade agreement that was just signed with the Trump administration.

The Karakoram highway, a major part of the CPEC. Image courtesy wikimedia

Chinese companies are already at work on this. Since 2013, over 50 Chinese state-owned corporations have signed on over 1,500 projects, the biggest being the China-Pakistan Economic Corridor, a 57 billion dollar plan for transportation networks, energy projects, and economic zones.

Despite the amount of money that has been thrown at this project, it hasn’t been smooth sailing. There has been criticism that China does not need such an ambitious plan, and that it is only an excuse for China to project its power over Eurasia. Infighting among Chinese government institutions has also slowed things down. Furthermore, China has shown a less than stellar record in identifying profitable ventures to invest in. Some have called it the ‘One Belt One Trap’ project.

India has been a vocal opponent to the project, refusing to even send representatives to the forum. Responding to queries, the Indian Ministry of External Affairs released a formal response as to why it did not participate. In it, the Ministry states several reasons why it doesn’t believe in the project, including “must be based on universally recognized international norms, good governance, rule of law, openness, transparency and equality” and “must be pursued in a manner that respects sovereignty and territorial integrity.” It also mentions the China-Pakistan Economic Corridor. A key part of CPEC is the Karakoram Highway which runs through a region that both India and Pakistan claim as theirs. India also seems to be fearing a situation similar to Sri Lanka’s own Hambantota port, which was used in a debt-for-equity swap to help pay off debts, sparking protests regarding sovereignty and fears of Chinese colonisation. Similar concerns have been raised in some other countries as well— whether they are valid concerns or not is up for debate.

What Does This Mean For Sri Lanka?

Sri Lankan Ambassador to China, Dr. Karunasena Kodithuwakku recently told Cheena Sinhala Handa that Sri Lanka greatly values this project and its importance depends on the economic connections that are made through it. Investment in infrastructure, services, and technical expertise, development of international trade, trade with Chinese financial institutions once they set up in the Colombo International Financial City, and the creation of new jobs are only a few of the things that Sri Lanka hopes to achieve through One Belt One Road.

While the promises are grand, it’s yet to be seen if they can be fulfilled. The influx of Chinese companies and Chinese workers is beginning to be visibly felt by residents of Colombo and Hambantota. Especially in Hambantota, there is fear that proposed economic zones will rob the people of their agricultural land and that any jobs resulting from the zone will only be available for Chinese nationals. There is also fear that long term leases of government properties would result in the eventual loss of autonomy in these regions to China. These fears led to clashes between protesters and supporters of the government. The Ceylon Ports General Employees Union, which is affiliated to the JVP, also protested the 99-year lease of 80% of the Hambantota port.

Former President Mahinda Rajapaksa has expressed his opposition to how Chinese backed projects are being implemented by the current government. Speaking to World Is One News in April, he said:

“There was no idea of colonisation in our time. China is a valued friend and a partner in development, that’s all. However, there is a significant difference between our approach and that of the present government. The Chinese projects were negotiated by the last government (ours) as per the structures I described. For Hambantota, it was a Supply-Operate-Transfer (SOT) arrangement only for the terminal and the land was leased to them. So there can be no talk of colonisation as such. But this government has changed all those policies. That is why all this is happening now.”

Regardless of the protests, it is an inevitable reality that the Chinese are here to stay for a long time—both as private corporate investors and investors backed by the Chinese government. After all, there’s money to be made and debts to be paid with that money. We can only hope that the One Belt One Road initiative will be as prosperous to Sri Lanka as the Chinese hope it will be for China.