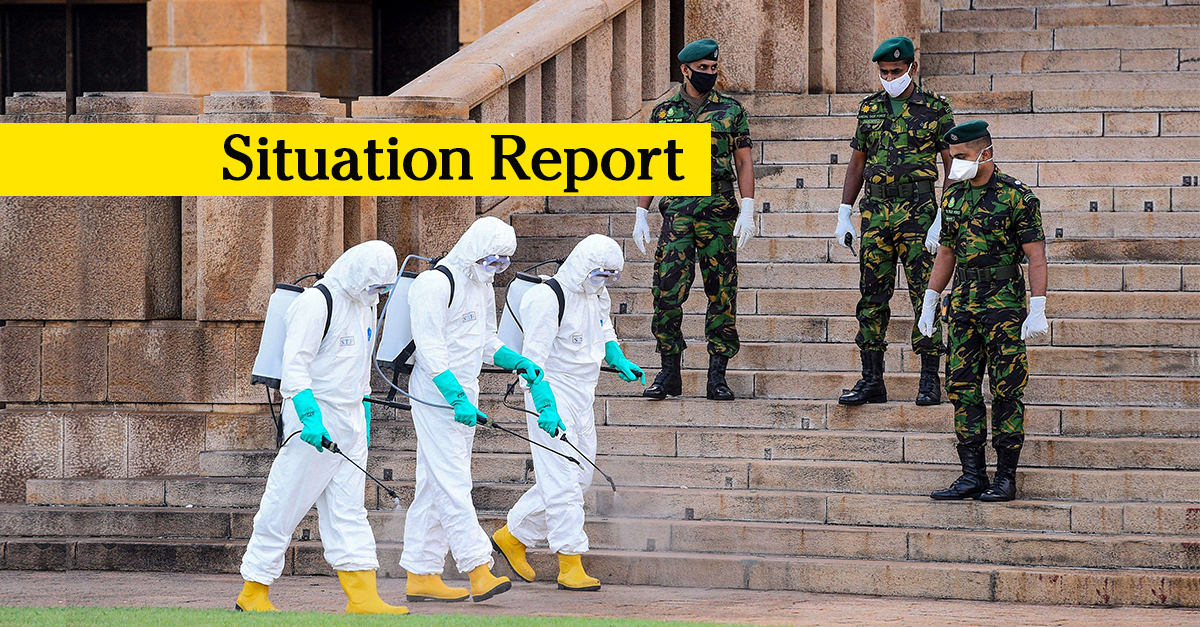 A surge of new cases from outside quarantine centres today (14) have caused concern there may be a community spread of COVID-19, even as authorities continue to reassure the public the situation is under control.

“If there are cases found among the public, we will let you know,” Health Services Director General Dr Anil Jasinghe told the media.

Despite the assurances, a private hospital in Ragama was temporarily closed after the  General Manager there tested positive for COVID-19. The General Manager had served as a consultant at the Kandakadu Treatment and Rehabilitation Centre prior to taking on the role of General Manager on July 1.

Forty-eight staffers who had come into contact with the patient were  placed in self-quarantine and have also been subject to polymerase chain reaction (PCR) tests, the results of which are soon expected.

At least 30 people from seven families in Homagama were also placed in self-quarantine today, after two Army personnel from the area tested positive for COVID-19 on Monday (13).

The two officers who are from Kendalanda and Godagama areas in Homagama, are employed at the Kandakadu Treatment and Rehabilitation Centre which is proving to be a vector for the latest cluster.

Two more COVID-19 cases were identified in two separate areas of the Gampaha district today: one, a staffer at the Kandakadu Treatment and Rehabilitation Centre and the other, a driver who transported the staffer to the Centre.

Complicating matters further, the driver had reportedly appeared as a witness at the Gampaha Magistrates’ Court on Tuesday, July 07, which will mean that all those present in court that day and their contacts will have to be traced and tested.

The Mobitel office at W. A. D. Ramanayake Mawatha, Colombo 2 was also forced closed after a person who was possibly exposed to COVID-19 visited the bank.

“As suspicion arose of a person who has associated with another person who in turn had exposure to a COVID 19 patient (third circle) had visited the W.A.D Ramanayake Mawatha branch, Colombo 02, we have taken necessary actions and have temporarily closed the branch for complete disinfection as a precautionary measure,” Mobitel said in a statement.

Later during the day, the Kilinochchi Campus of the Jaffna University was also shut down, after the brother of a student from the university—an Army officer deployed at the Kandakadu Treatment and Rehabilitation Centre—tested positive for the virus.

This very latest, unexpected cluster that has emerged from Kandakadu Treatment and Rehabilitation Centre continues to grow with each passing day. At the time of writing, 519 patients have been identified from the cluster, within a time frame of six days.

Meanwhile, responding to the cases reported from various parts of the island today, President Gotabaya Rajapaksa assured the public that he would protect them from the virus.

He also instructed officials to continue to take PCR tests to contain the spread of the virus.

The Government Information Department and the Health Promotion Bureau have both stepped up efforts to educate the public on health and safety measures they should be adhering to, while the President’s Media Division issued a notice reminding all public and private institution heads that the responsibility to ensure health guidelines are adhered to lay with them.

For another article related to this latest outbreak, click here. Click on this to learn more about how Sri Lanka fared during the first five months of the COVID-19 pandemic and for Roar’s overall coverage of the pandemic, click here.