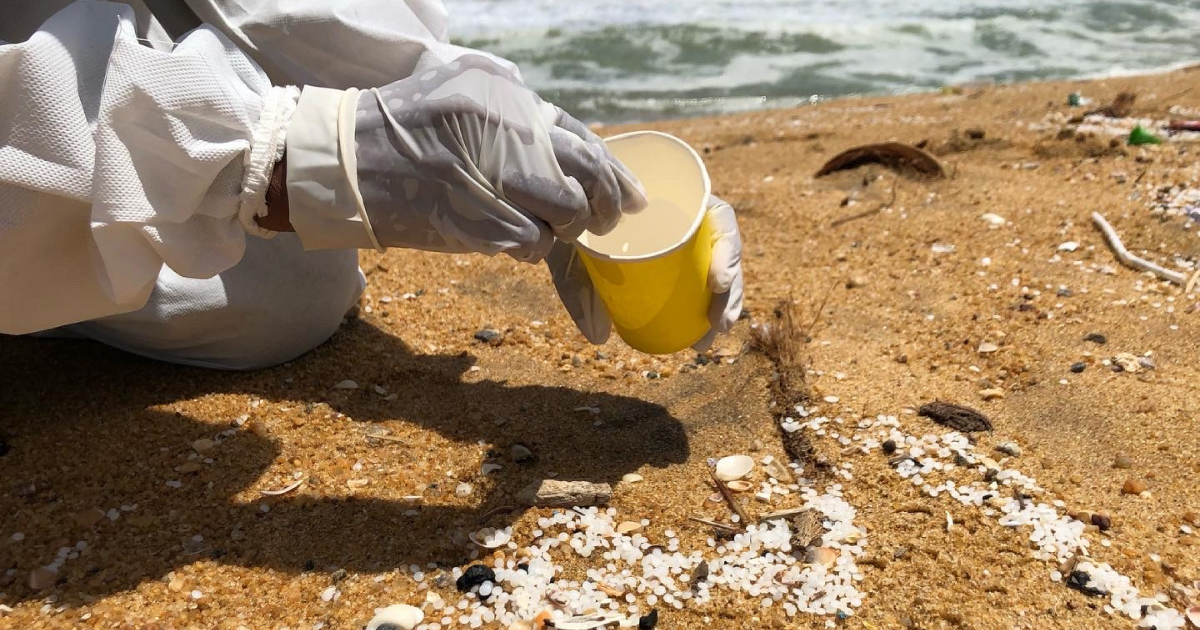 The plastic pellets that continue to litter Sri Lanka’s coastlines are a bleak reminder of the fire that broke out on board the MV X-Press Pearl in late May. Although the fire has been long subdued, the resulting maritime disaster — widely perceived to be the worst Sri Lanka has ever faced — is far from over. The billions of linear low-density polyethylene (LLDPE) and low-density polyethylene (LDPE) pellets that the distressed vessel was transporting turned the island’s picturesque beaches, once teeming with life, into wastelands.

Plastic pellets, also colloquially referred to as ‘nurdles’, are the building blocks of nearly all plastic products. What makes them most problematic is their size, as they are introduced to the environment as microplastics (plastics that are generally 5mm or less in size) and go on to pollute even before they serve any purpose as completed plastic products.

When nurdles spill into the ocean, they absorb pollutants that have moved into our seas through land runoff, such as persistent organic pollutants (POPs). According to the World Health Organization (WHO), the most commonly encountered POPs, such as polychlorinated biphenyls (PCB), organochlorine pesticides and industrial chemicals, can have significant negative impacts on the environment and human health.

Even though plastic, as a raw material, is popular for its versatility, what is not so popular are the ingredients added in the manufacturing process that make plastic so versatile and colourful. These ingredients consist of fossil fuel contaminants, additives such as dyes, bisphenol A (BPA), phthalates and plasticisers.

When marine animals consume these lentil-sized nurdles by mistaking them for food such as fish eggs or roe, the toxic chemicals inside can leach out and bioaccumulate or build up in their cells and tissues. The ingestion of nurdles alone could block their digestive tracts, leading to starvation and death.

While more than 100,000 marine mammals are killed every year by macro-plastic ingestion or entanglement, a study published in the Environmental Pollution journal in 2018 suggests that even particles as small as 5mm could push these animals further to the brink of extinction as microplastics and chemicals can be passed from one trophic level to the next throughout the food chain.

The predicted immediate impacts of the recent maritime disaster in Sri Lanka were apparent, as lifeless fish washed up with nurdles inside their gills and mouths. A vast number of other marine wildlife, including sea turtles, were also found dead on beaches in several parts of the island.

While there exists a lack of baseline data to determine if the strandings are unusual, as well as the possibility of “observer bias” in reporting, the importance of assessing this causal link cannot be overstated, since the vessel carried many harmful chemicals. According to cargo records, the MV X-Press Pearl was laden with 1,486 containers, of which 81 carried cargo classified as “dangerous”. This included 25 metric tonnes of nitric acid and 445 containers of plastic and rubber materials.

“There is definitely an impact on the marine animals from the pollution caused by the ship, particularly from the chemical aspect,” Dr. Ranil Nanayakkara, a member of the IUCN/SSC Sirenia Specialist Group, and co-founder and principal scientist at Biodiversity Education and Research, told Roar Media. However, he added that the cause of death cannot be ascertained without necropsy results.

The nurdles can also have long-term effects on sea turtle nesting beaches, by potentially altering the temperature and permeability of sand. This would impact sea turtle populations, as the gender of hatchlings is temperature-dependent.

“We need to do further studies on how microplastics can impact the marine environment in the long run. Especially since these break down over time into even smaller [nano] particles,” Dr. Nanayakkara explained.

Being lightweight and buoyant, the nurdles have spread across the western and southern coasts of Sri Lanka. In due course, this is bound to become a regional problem since ocean currents and wind speeds will continue to disperse. According to a computer-generated model shared by Prof. Charitha Pattiaratchi from the University of Western Australia, the nurdles will make landfall in many of the Indian Ocean countries (Indonesia, India, Somalia and Maldives) due to the reversing monsoon currents in the region.

However, addressing a recent image that circulated on social media, showing nurdles appearing at the Vagator Beach in Goa, India, Dr. Pattiaratchi said, “It’s unlikely to be from the MV X-Press Pearl since the currents and the winds are in the opposite direction. It could be from another source.”

If so, what are the other possible sources of nurdles? Even though nurdle pollution only recently became a well-known phenomenon for many in Sri Lanka, nurdle spills are not uncommon in other parts of the world. Nurdles are produced in different countries and shipped to plastic manufacturing plants in other places for the production of various items, from plastic bags to plastic furniture. Improper transfer and storage can result in these pre-production blocks of plastic items being released into the environment at any stage of the plastic chain, from the production process to shipping.

Previous nurdle spills in other parts of the world include a 150-tonne pellet spill back in 2012, which resulted in nurdles strewn along the beaches of Hong Kong; 49 tonnes of nurdles released into the sea in 2017, near the port of Durban in South Africa, polluting 1,200 kilometres of coastline; millions of nurdles falling into the Mississippi River in New Orleans in 2020, from a shipping container that was estimated to have carried 25 tonnes of nurdles; and, also in 2020, when a storm ruptured a plastic container on a ship that was travelling from the Netherlands to Norway, resulting in a 13-tonne pellet spill in the North Sea.

Cleaning up nurdles is an uphill task and unless they are physically removed they will become part of the estimated 51 trillion microplastics that are littering the ocean. In Sri Lanka, although many people expressed their interest in volunteering to help clean up the beaches following the MV X-Press Pearl disaster, this was not possible due to the nationwide lockdown that was in effect to prevent the spread of COVID-19. The public was also rightfully advised to keep away from the contaminated coastal areas, due to the hazardous nature of the materials that made up some of the vessel’s cargo.

During this time, the Marine Environment Protection Authority (MEPA) together with the tri-forces and other agencies took up the task of restoring the worst-hit areas along the coast of Negombo, which in the immediate aftermath appeared to be coated in plastic snow due to the billions of nurdles that had washed ashore.

“As of 14 July 2021, MEPA has collected 1,600 metric tonnes of nurdles and other debris. The collected nurdles are being stored and we will continue the cleanups over the next few months,” Dr. Terney Pradeep Kumara, General Manager of the MEPA told Roar.

With some COVID-19 travel restrictions now lifted, The Pearl Protectors, a youth-led marine conservation group, launched the “Nurdle Free Lanka” volunteer campaign to help tackle the nurdle-strewn beaches. The group uses three tools to effectively filter the nurdles embedded in the sand. About 200 volunteers took to the beach on 18 July with nurdle trommels, hanging sieves and hand-held sieves, and collected 327 kilograms of nurdles. The campaign will continue for three months with regular volunteer mobilisations, while the tools will be available at coast guard points for beachgoers to use.

Much like other types of microplastics, nurdles cannot be collected, reused or recycled as comprehensively as larger plastic debris, because they become toxic and weathered once in the environment. Beyond clean-up efforts, it is vital for Sri Lanka to consider introducing guidelines and legislation to address pellet spills, as the island is already vulnerable to marine pollution due to the busy international shipping lanes that go around it.

“There needs to be a more robust material that is thick and can absorb wave energy to pack the plastic pellets, as the existing packaging is thin,” explained Dr. Pradeep Kumara of the MEPA. The material that is currently being used to pack nurdles can easily be torn and cannot withstand fire. “[We also need] stricter guidelines on the transport of nurdles at a global level, for instance classifying nurdles as hazardous marine cargo,” he added.

Nurdles are being produced and transported around the world, and pose the threat of spills from the onset. In addition, they will later be moulded into plastic items that will once again turn into secondary microplastics when disposed of. To prevent pollution at the source, it is crucial to halt the use of, at the very least, single-use plastics. Choosing eco-friendly alternatives instead of single-use plastic items at all levels is an essential first step towards nurdle-free waters.